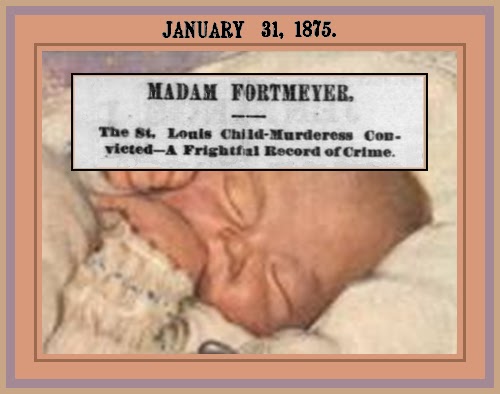 NOTE: Some sources use the spelling "Fortemeyer."

FULL TEXT (Article 1 of 2): The trial of Madame Julia Etta Fortmeyer, abortionist, which has been in progress here during this week, exciting a great deal of attention, came to a termination to-day, the jury returning a verdict of manslaughter in the second degree, and fixing the term of imprisonment at five years. Since her imprisonment she has bid open defiance to everybody, and dared conviction while boldly confessing her crimes. She says she has been plying the profession of an abortionist for the past fifteen years in various western cities under the guise of midwifery. To the World correspondent she confessed that she had committed several hundred of these infantile murders in St. Louis during the past seven years, more recently she had adopted cremation as the best means of getting rid the remains, and, without a shadow a blush or a remnant of feeling, calmly stated that she had burned the bodies of more than a hundred babies.

Mme. Fortmeyer is a large, portly woman, with cold gray eyes, capable and in the habit of working herself into a fury of rage upon slight provocation, when her language reaches a degree of profanity startling to the most callous.

Her practice, she says, has been confined almost entirely to people in the higher classes of society.

It was stooping to care for two girls from humble life that led to her discovery. For six years she had plied her profession unmolested by the police, moving about from one neighborhood to another, so as not to attract attention by a long residence in any one place. Last August she was living at No. 1817 Morgan street, and had under treatment a German girl named Louisa Buhler, who had come here simple and honest from the quiet town of St. Genevieve, and had entered domestic service.

The ways of the city had bewildered her, and she had been seduced by a young grocery clerk. A negro huckster had detected her condition, and had persuaded her to go to Mme. Fortmeyer. Once under the influence of the doctress, she had yielded to the latter’s representations, and had submitted to have an operation performed. This was her own story, as she told it in court yesterday.

On Saturday, Aug. 8, while this girl. Louisa, was under treatment, Lena Miller, a fair-looking mulatto girl, applied for treatment, and was taken in. At midnight the work had been done, and an hour later this girl was dead. Sunday, Mme. Fortmeyer coolly notified the policeman on the beat that the girl had been sick in her house and had died in a spasm, and she wished the body removed. The request awakened the suspicions of the officer, and he insisted upon an immediate inspection of the premises. A hasty glance revealed the presence of a collection of suggestive instruments, and the woman was promptly arrested. Louisa Buhler lay sick in the house, but insisted that she had been suffering from an attack of cholera morbus. As the doctress sat in her cell at the station-house muttering to herself, she was overheard to say, “Ashes tell no tales.” Another hasty search was made, and in the stove were found the calcined bones of a child. In an place was found an infant corpse wrapped in paper, and evidently waiting cremation. In the ash-heap were found still other human bones. Confronted with these facts, Louisa Buhler confessed what she had undergone. The doctress had an accomplice in the person of a young woman named Sarah Fay, whom she was initiating into the mysteries of her craft. This woman had fled at the first indication of trouble, but was found, and she turned State’s evidence. 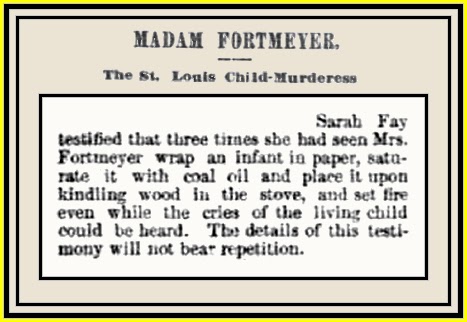 The Coroner’s inquest resulted in the holding of Mme. Fortmeyer responsible for the deaths of the two babes of Lena Miller and Louisa Buhler and for the death of Lena Miller. The grand jury found two counts against the doctress for murder in the first degree. During the trial just closed all the horrible mysteries of the abortionist’s profession were laid bore, and the details of the monstrous deeds told with sickening minuteness. Sarah Fay testified that three times she had seen Mrs. Fortmeyer wrap an infant in paper, saturate it with coal oil and place it upon kindling wood in the stove, and set fire even while the cried of the living child could be heard. The details of this testimony will not bear repetition.

Public opinion brands this woman as the greatest criminal the West has ever known, out-doing the Bendero, and the only regret felt at the sentence imposed is that it was not made heavier. FULL TEXT (Article 2 of 2): St. Louis, Mo., Oct. 7. – Last night about midnight Mme. Fortmeyer, sentenced to ten years imprisonment, made her escape from prison in Jefferson City, by forcing her body through over the transom of her cell. There were no gates or guards to impede her flight. She has bold and desperate friends on the outside, and there is little hope of recapturing her. Mme. Fortmeyer was convicted as the April term of the St. Louis Criminal Court of the murder of a young girl named Lena Miller and her infant child by malpractice. After her arrest a search was made of her house and the charred bones of two infants were found in a stove in her bedroom. She confessed to Detective Metzger that one of the infants was that of Lena Miller, which she had burned alive. A number of horrible developments followed, showing the accused to be a perfect monster, it being an undoubted practice of hers to burn every child delivered by her, whether dead or alive. There is good reason to believe that she has murdered and burned at least fifty infants during the prosecution of her inhuman business in this city for a series of years. She had also earned an infamous character in New-York and Chicago before she came to St. Louis, and her operations in the monstrous practice have probably been more extensive than those of any other person in the United States. After her arrest she boldly threatened to expose a large number of reputable people in this city if they did not extricate her from her difficulty, and there were great efforts made by certain persons in her behalf, who succeeded in obtaining for her the light penalty of ten years in the Penitentiary, instead of the gallows.

EXCERPT: For years she carried on her criminal calling without detection, and was at length brought to justice only after the most careful preparation. She had operated on at least a hundred babies, whose remains she was in the habit of disposing of by the process of cremation.

L. U. Reavis, Saint Louis: The Future Great City of the World: with Biographical Sketches of the Representative Men And Women Of St. Louis And Missouri, C. R. Barns, St. Louis, 1876, pp. 557-561

Book: Life, Crimes And Confession Of Mrs. Julia Fortmeyer, Of St. Louis, Mo., Known As The Baby Burner: The Great Trial, Speeches Of Counsel On Both Sides, Her Conviction. Philadelphia : Barclay & Co., 1881