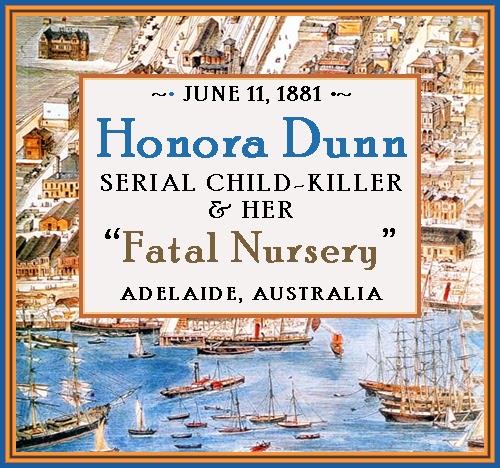 FULL TEXT: The case of the woman Honora Dunn, who, at the Criminal Sittings on Thursday last, was convicted of manslaughter, and sentenced to five years’ imprisonment with hard labour for causing the death of a child placed under her charge, is suggestive of very unpleasant reflections, not simply because of the peculiar atrocity of the crime of slowly killing a helpless infant, but on account of the strong suspicion raised by the evidence that the inhuman treatment of children, inflicted with a view to bringing about their early death, has for some time past constituted this woman’s regular employment.

She was accustomed, it appears, to receive illegitimate children – those unfortunate waifs whom no one cares to own, and whom even the law itself regards as beings having no right to existence — to feed them with food calculated to bring on diarrhoea, and, when the poor little sufferers cried, to beat them most un mercifully, the object presumably being to hasten their death.

Perhaps this baby farmer might for years have continued this brutal trade undetected had it not so happened that in connection with the treatment of one unfortunate child circumstances arose somewhat differing from those usually attaching to the inmates of her fatal nursery.

In that case the de ceased was a boy ten or eleven months old, whom his mother entrusted to the keeping of the woman Dunn, agreeing to pay the unusually high charge of nine shillings per week for his maintenance, in consideration of his receiving more attention than the other children under her charge. The mother, being really solicitous of the health of her infant, stipulated that he should be fed with milk and nourishing food. But it was evidently not the object of such an establishment as that which Mrs. Dunn kept to make adequate provision for the health and comfort of the inmates.

The customary course of treatment, unwholesome feeding, and incessant slapping, seems in this case to have undermined the child’s health with unusual quickness, for when the mother called to see him after the lapse of a week from her previous visit we was suffering severely from diarrhoea, and was already very much emaciated. His cheeks bore the marks of cruel blows inflicted upon him by a heavy hand. He had congestion of the lungs and of the brain. In fact, within the short space of seven days the child had been brought almost to the point of death.

The mother then made arrangements for the admission of her infant in to the Hospital, where he died about an hour after his arrival. His Honor Mr. Justice Andrews, in commenting upon this case, expressed the opinion that prisoner had been in the habit of trading upon the indiscretion and consequent misery of young women, and of ill-using the children placed under her charge.

He asserted without reserve that she had actually killed the child whose death formed the subject of investigation, and that there was ample evidence to show that she had treated other infants horribly. The question naturally suggested itself  – How many children have perished from the effects of the cruel treatment of this inhuman nurse? Following upon that comes the enquiry – How many of the little victims were placed under her care with the tacit understanding that their death was a consummation devoutly to be wished?

It is a terrible stigma upon humanity, but it is none the less true, that such arrangements are common in almost every civilized country in the world. When Dickens drew attention to the existence in England of large establishments in which disowned children were gradually starved and beaten to death, many people regarded his descriptions as pure inventions; but investigation disclosed the melancholy fact that his charges against society were substantially correct, and that such institutions were in reality suffered to exist.

The ailments to which children are subject are so numerous and so readily contracted that the business of slowly putting the little creatures out of the way is easily conducted, and, unfortunately for society, can be carried on for a considerable time by a cautious and unscrupulous female without the occurrence of any case tending to criminate her, or even to rouse a strong suspicion of her guilt. In the present case the prosecution was the result of the woman’s indiscretion in not noticing that the child’s mother was really anxious that it should live.

The offer to pay the unusually large sum of nine shillings per week, and the stipulations made with regard to the suitable nourishment which the child was to receive, indicated that the mother did not possess the amount of heartless indifference usual with females who place their children under the tender mercies of the baby farmer.

Had Mrs. Dunn declined the charge of the child she might have continued with impunity her vile trade, quietly starving to death the infants committed to her care without drawing down upon herself the notice of tender-hearted neighbours and the interference of the officers of justice. When we consider the terrible amount of misery inflicted on the innocent in mates of one of these baby-farming houses, and the comparative ease with which this horrible occupation can be carried on, it is reasonable to enquire whether the law takes sufficient pre cautions against the existence of the evil. It is natural to ask whether legislators, in their anxiety to discourage immorality, have not visited the sins of the mothers too heavily upon their unfortunate offspring.

By entirely ignoring this class of crime the authorities have afforded facilities for its development. It is greatly to be feared that the comparative case with which infants can be disposed of under colour of being taken care of acts as an incentive to immorality of the worst kind, and it follows that if steps were taken to prevent the possibility of foul play and secure the up-bringing of the children good service would be rendered to the community. Seeing that the system of boarding but destitute children under proper inspection has proved so successful, it would perhaps be a wise stop for the Legislature to forbid the boarding-out of illegitimate children excepting in houses duly licensed and regularly inspected by the proper authorities.

The present plan of ignoring the evil and disregarding the facilities for its exercise, until some glaring case of slow murder brings the offender within the grasp of the law, is in the highest degree unsatisfactory. It is a disgrace to civilized communities that in this matter they neglect obvious methods of mitigating an admitted evil, and in effect wink at practices which, if carried on only in semi-barbarous countries, would raise a howl of virtuous indignation.