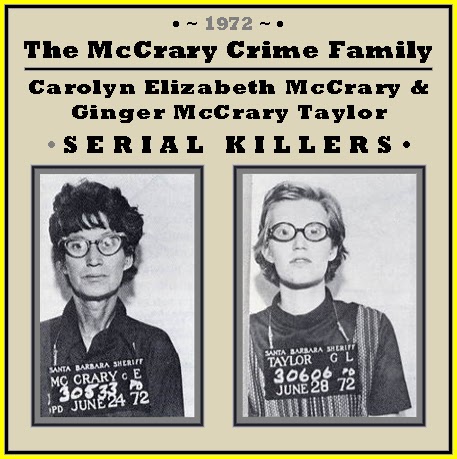 FULL TEXT (Article 1 of 2): Santa Barbara, Calif. (AP) A Texas woman being questioned by authorities about a cross-country crime wave says she will fight extradition to Texas to face armed robbery charges.


Carolyn McCrary, 45, refused Thursday to waive extradition and the matter will have to go through agencies of both states before a Santa Barbara Court could send her back.

Mrs. McCrary is one in a family of five being questioned about a variety of crimes across the nation, including about 22 murders.

Currently she is serving a nine-month sentence for harboring her son and husband in a supermarket robbery in Santa Barbara.

The remainder of the McCrary clan is involved in extradition proceedings to Texas and other states.

Sherman R. McCrary, 47, and Robert Taylor, 38, McCrary’s son-in-law, have been extradited to Denver where they are charged with the August 20, 1971 slaying of a suburban Lakewood doughnut shop waitress, Leeora Rose Looney, 20.

They also are named in a federal kidnap warrant issued in Utah in the disappearance and subsequent death of another doughnut shop waitress, 17-year-old Sheri Le Martin, whose body was found on an eastern Nevada desert a year ago. She was employed in a South Salt lake doughnut shop.

McCrary’s 19-year-old son, Danny, was returned to Dallas earlier in the week to face a parole violation charge. He also was being held for investigation of murder and robbery in the slaying of a suburban Mesquite, Tex. couple last year.

Miss Looney’s body was found in a grassy field near the Wyoming border August 23, 1971. She had been shot, strangled and raped. 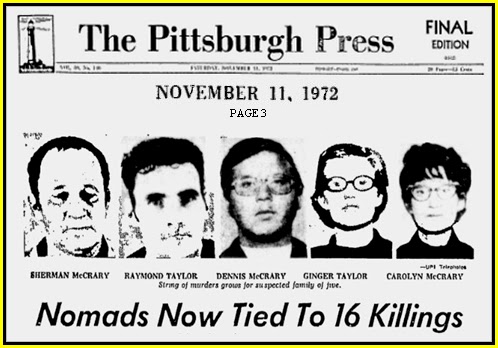 FULL TEXT (Article 2 of 2): Santa Barbara, Calif.--- For most of their lives, the men aimlessly wandered the American southwest, scratching for jobs as ranch hands, carnies and fry cooks.

The women worked honky-tonk carnivals too, or hustled jobs as waitresses in sad little cafes.

Theirs was a mean existence, which included an occasional brush with the law, nothing very serious, nothing that could be considered a harbinger of the future.

Finally, the family got fed up with the grubbiness of the toil and travail, but not of the nomadic life.

So the clan decided, perhaps a year ago, according to most estimates, to continue their meanderings – but along a different route.

It’s subsequent thrust for upward mobility resulted – law enforcement officer said last week – in a cross-country crime spree, the extent of which may never be known.

At least 10 persons from Florida to Oregon were killed by one or another member of the family, officers said.

Before the investigation is completed, if it ever is, the toll probably will be much higher, they added.

Police Chief Glenn Grayson of Mesquite, Texas, where three of the victims lived, said he had been told by authorities here that the nomads were being questioned about 22 murders.

“We don’t know the number that might be involved,” Santa Barbara Police Capt. Charles Thompson said at a press conference here last week, in which investigators from out-of-state jurisdictions participated.

“Murders all over the country are being investigated,” said Det. Sgt. Herb Jordan of Mesquite, another participant.

“The motivation for these crimes has been robbery,” said Roger Willard, an agent for The Department of Public Safety in Lakewood, Colo., where one of the victims was abducted.

The first of the murders attributed thus far to the nomadic kinsmen occurred in August, 1971, the latest, earlier this year.

If robbery was the motive in the slayings linked to the clan, the nomads fared poorly in those instances.

Three of the murder victims, one in Mesquite, one in Lakewood, and another in south Salt Lake City, Utah, were doughnut shop waitresses.

The robberies which proceeded their deaths and those of other victims, said a Texas officer, rewarded the family with only a piddling amount of cash.

But participants in last week’s press conference said that once the family’s wanderings carried them to this area in April, members became more selective, richer and apparently less murderous.

They occupied two rented homes in an upper middle class tract and drove two late model station wagons. The McCrary’s lived in one house, the Taylors in another.

The June 16 robbery, officers said, was what eventually resulted in the family’s being linked to a series of unsolved murders in several states.

Following the robbery, McCrary commandeered a car and escaped during a shootout, but detectives traced him through an auto which he had abandoned in the market parking lot.

Subsequently, Taylor and his father-in-law were convicted and sentenced to from five years to life in San Quentin, where they are now, for the market robbery.

McCrary’s wife son and daughter were given nine-month sentences in the county jail here for harboring felons.

Guns were found in the residences, and these were presumably linked to some of the unsolved murders.

Texas officers said that as long ago as last February, FBI ballistics experts established from markings on bullets that six of the slayings were related.

Markings on slugs taken from the six victims – all shot several times – were identical with either a .32 caliber or .22 caliber bullets taken from each of the others.

Three of the slayings involved persons who vanished from Mesquite and the other three involved the young women kidnapped in Lakewood and South Salt Lake City, and a third abducted in Portland, Oregon.

Mesquite Police Chief Grayson said he had been told that authorities here had obtained three statements from family members. One said Grayson detailed how the three male members of the family abducted a Mesquite couple, later found slain.

When the murder spree began, the McCrary-Taylor clan resided in Athens, Texas, authorities in Texas said, where they were living with relatives. Taylor, at the time, worked on a ranch near the Henderson County town of 10,000.

The manager of the ranch said Taylor quit his job in early January and “I haven’t seen him since.”

Texas officers said that during the latter half of 1971 the family would disappear briefly from Athens only to return a short time later. They theorized clan members made extensive high speed trips long distances to commit crimes during these absences.

The ranch manager said that at the time, the slender, red-haired Mrs. Taylor was the mother of three preschool children.

She gave birth to another child in the jail here last week.

Both the elder McCrary and Taylor had records before the crime spree, said officers, but none of their previous brushes with the law was of a major nature. 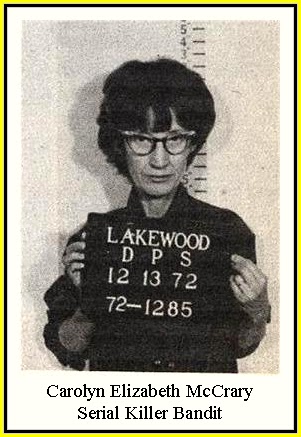 ~ The 10 crimes for which authorities believe the family is responsible are these: ~

The August 12 kidnapping of Sherri Lee Martin, 17, from a South Salt Lake City doughnut shop where she worked. Two men robbed the shop of about $200, then fled with her in an automobile. The young woman’s body was found Sept. 4, 1971, in the desert, near Windover, Nev., she had been shot several times with a .32 caliber weapon.

The August 20, 1971 abduction of Leeora Rose Looney, 20, from another doughnut shop in Lakewood Colorado, where the McCrary family lived for about a year. As in the Utah case, two men held up the doughnut shop and fled in an auto with the young woman employee. Her body was found three days later in a pasture near the Colorado border. She had been strangled and shot several times with a .32 caliber weapon. Several patrons of the shop identified pictures of McCrary and Taylor ,said Colorado officers, as Miss Looney’s abductor.

The September 28, 1971, kidnapping of Mrs. Elizabeth Perryman, 26, from a restaurant at the Texas Tech campus near Lubbock, Texas. She was found dead on a ranch near Amarillo the following December 19.

The October 17, 1971 disappearance of Forrest Covey, 24, and his wife Jena, 19 from a drive-in grocery which she managed in the Dallas suburb of Mesquite.

Their bodies were found in an abandoned barn in Quinlan, Texas, east of Dallas, October 24, both had been shot about half a dozen times with separate guns, one a .32 caliber and the other a .22 caliber weapon.

The October 20, 1971 disappearance of Susan Darlene Shaw, 16, from the Mesquite doughnut shop where she worked. Her body was found the same day as the Coveys.

~ Other deaths linked to the McCrarys: ~

Barbara Joan Mooreman, 22, of Irving Texas, a suburb of Dallas, kidnapped from a grocery store in Irving.

Valerie Turner, 16, of Melrose, Florida, kidnapped from her mother’s beauty shop and found murdered in nearby woods June 25, 1972.

Jake Green, 69, Kansas City, Missouri, a janitor that disappeared March 2, 1972 from a tavern where he worked in Kansas City.

Mabel Manley, 68, Kansas City Missouri, a barmaid who disappeared from the Kansas City tavern where she worked March 2, 1972.

Joanna Leatherbury, 18, Salt Lake City Utah, whose bullet riddled body was found on The Great Salt Lake during the summer of 1971. 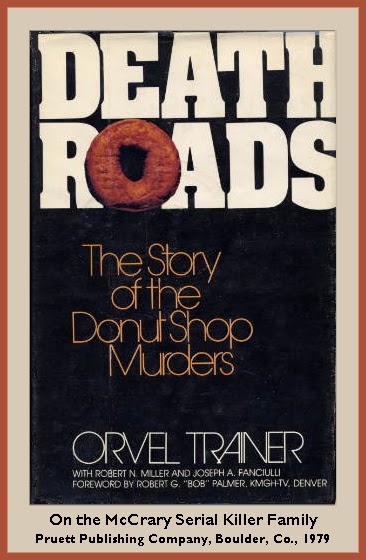 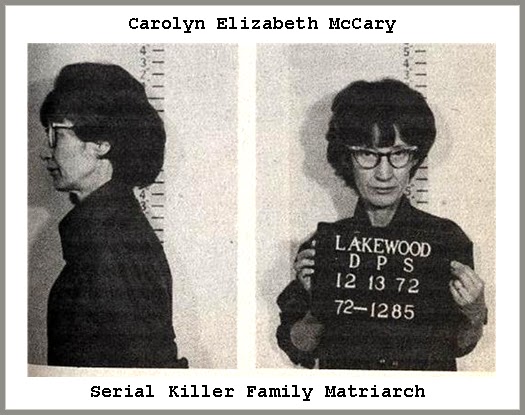 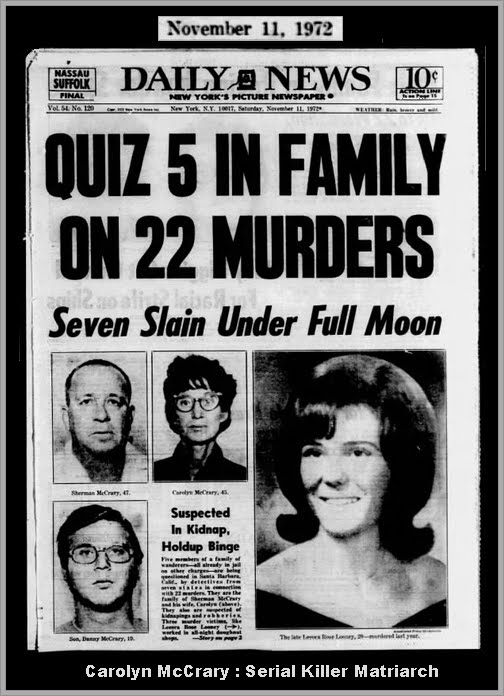