The Alimony Racket in 1926: "Alimony Heiresses" 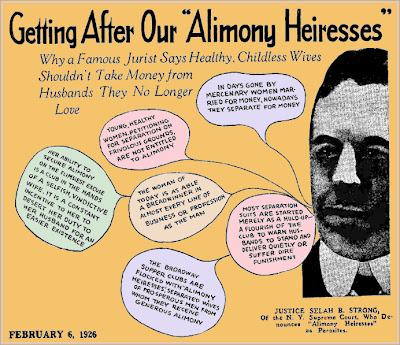 “Her ability to secure alimony on the flimsiest excuse is a club in the hands of a selfish, vindictive wife. It is a constant incentive to her to desert her duty, to desert her husband for an easier existence.”

“Young healthy women, petitioning for separation on frivolous grounds, are not entitled to alimony.”

“The woman of today is as able a breadwinner in almost every line of profession as the man.”

“In days go by mercenary women married for money, nowadays they separate for money.”

“The Broadway supper clubs are flocked with “alimony heiresses,” separated wives of prosperous men from whom they receive generous alimony.”

“Most separation suits are started merely as a hold-up – a flourish of the club to warn husbands to stand and deliver quietly or suffer dire punishment.”

FULL TEXT: IN THE following article, Supreme Court Justice Selah B. Strong, of New York, amplifies certain striking opinions of his recently delivered address from the bench. His expressed attitude on alimony heiresses was regarded as remarkable at the time, and wide interest was therefore aroused in the new juristic problem: “How many independent -women with no children are justified in their alimony demands, and how many are just plain mercenary?”

By Supreme Court Justice Selah B. Strong (As told to A. E. Bearman)

THE wittiest summary of the alimony situation I have ever heard runs that whereas in days gone by mercenary women married for money, nowadays they separate for money.

Not long ago a storm of discussion broke about my head. In passing upon the plea of a woman who wanted alimony, I had stated [that I do} not believe that young women who were unemcumbered with children were entitled to alimony.

There were many men and and so-called feminist activists who felt as I did. They took the stand that I was right in principle, especially as I had taken care to emphasize that mine was not a sweeping declaration that no childless wife deserved alimony, but that each individual case should be considered on its own merits and determined by other factors.

I was immediately beset by men and woman of a different sort who advanced the various threadbare, to-be-expected arguments in favor of alimony for all wives as a sort of inherent right.

There is little doubt that many women believe as strongly in the sanctity of the wife’s alimony rights as she does in the sanctity of marriage itself. I am now speaking of the old-fashioned wives who probably never will have to invoke the alimony laws in their own behalf, and not the marital slackers.

The trouble is most people never consider that there are two separate and distinct sides to the marriage arrangement – one the sentimental side, the “till-death-do-us-part;” and the business side, which is essentially a legal contract whereby each of the pair agrees to do his or her part. But when the sentimental side blows up, it is to the legal side that one or the other or both of the contractors turn in search of a solution.

Her ability to secure alimony on the flimsiest excuse is a club in the hands of a selfish, vindictive wife. She can, and often does, wave it constantly over her husband’s head to keep him tractable. The trouble is that we are bound today by marriage laws and their offshoots that took root in days long past when conditions were not as they are today and when the status and economic position of woman was in large measure dependent on some man for her support. The business woman hadn’t been invented or discovered.

In the real analysis the laws to protect the wife were not passed for the wife’s sake. They were passed for the public’s sake. There had to be some coercive regulations to discourage bored husbands from unloading their helpless wives upon an already overburdened community.

The true daughter of today seeks no favors from men and accepts none, because she knows that she needs no favors. That is why it seems almost unbelievable that a right-minded woman without children will accept support from a man she has ceased to love and live with when she must realize it is at the cost of her self-respect.

However, the point is that instead of a former marriage hurting a woman’s market value (to put it in a vulgar way) it seems actually to make her more desirable. Witness the success – in the marriage mart of widows, legal as well as actual. Indeed, if observation counts for anything, they attract more admiration than the feminine novices. In passing, it may be said that divorce statistics show, that the marriages of the once before wives are more durable as a general thing than the marriages of the never before.

That is why it gives one's sense of justice a terrific jolt when, as it frequently happens, it develops that a woman separated from her husband and seeking alimony, has a bigger income than he. I have in mind a man who at the time of this writing is in jail for non-payment of alimony. And it appears that his childless wife, hating gone into business since their separation, has made a success and is earning more money than he earns or ever did earn or probably ever will earn.

The question is: Did she have, him thrown into jail in order to get money or revenge?

At any rate, this case, and there are literally thousands like it, shows that the alimony, “big stick” smites the man coming and going. I am convinced that very few of the actions for separation with alimony by childless women are sincere; that is, based on their honest belief that they are really entitled to what they ask.

While well-informed people know generally our divorce figures, few know that twenty times as many separations actions are begun as divorce actions. I said begun. Probably not ten per cent ever reach trial. The vast majority of them were never intended to reach trial. They were started purely as a hold-up, a flourish of the club to warn husbands to stand and deliver quietly or suffer dire punishment.

To my mind, separation with alimony tends to make for immorality, if not at once at least in the long run. Divorce has its evil side, no doubt; but at least it has the virtue of finality.

The Broadway supper clubs and tea rooms of New York and the butterfly groves of every community large and small, no doubt, are flocked with women of that type jocularly termed in the slang of the day: “The Alimony Heiresses.”

Does anyone pretend to believe that the morals of such parasites are enhanced by their manner of living? Isn't their philosophy, so often expressed, that they'd be fools to marry and lose both their freedom, and their alimony an index of their mental condition?

And what can the husband of such a woman do about it? Well, unless he can actually prove infidelity, he will remain bound to the wheel. And the moral certainty of infidelity isn't easy to translate into legal proof.

Every day woman's part in the world becomes bigger, nobler, more useful—and that she will permanently cling to the perquisites accorded her sex when she was a sort of  household chattel—is as unthinkable as that she will willingly surrender her new social, economic and political freedom.