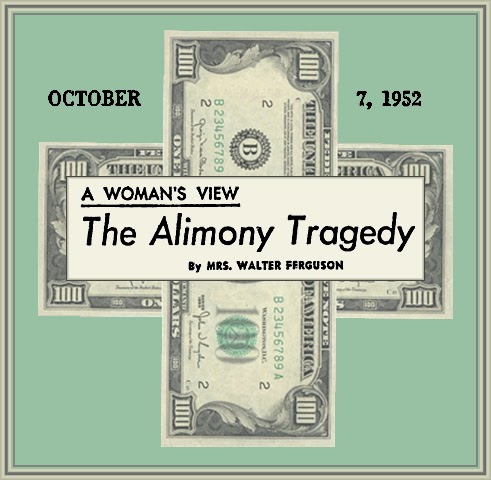 NOTE : The following text is a book review written by Mrs. Walter Ferguson on a 1952 book, Alimony: An American Tragedy, by Dr. Charles Wilner.

FULL TEXT : We have a man who is so mad about alimony rackets, he’s written a book. “Alimony, The American Tragedy,” is the title and Dr. Charles Wilner of New York is the author.

Feminism gets a trouncing. It is charged with having produced the money-grubbing females of our age. Usual tributes are paid by the writer to the old-fashioned, home-loving wife who inspired man to his best efforts and found her greatest rewards in his respect and love. You know the line.

But certain other comments will be sure to make some feminine readers boiling mad. I still recommend them, for they are backed by solid good sense.

Dr. Wilner’s most startling charge is that alimony laws are creating an ever-growing group of American spinsters. The lawyers connive with wives to extract every last dollar from an ex-husbands purse, he contends. Thus, the divorced men can’t or won’t remarry, because they are disillusioned and hate the opposite sex.

“Millions of women pine away in unwed loneliness, merely because predatory alimony-wives devour their prey so publicly that many men are frightened away from matrimony into bachelorhood,” says Dr. Wilner.

“First the attitude of men who are afraid to marry.

“Second, the ease of which men can satisfy their instincts outside of wedlock.

“Third, the vast number of men who are forced to support economically self-sufficient wives by means of alimony, and are therefore unable to assume a double responsibility.

“Fourth, the large army of women who have reduced their own chances of marriage by competing with and directly replacing male labor.”

That’s the bad news, girls. Think it over.