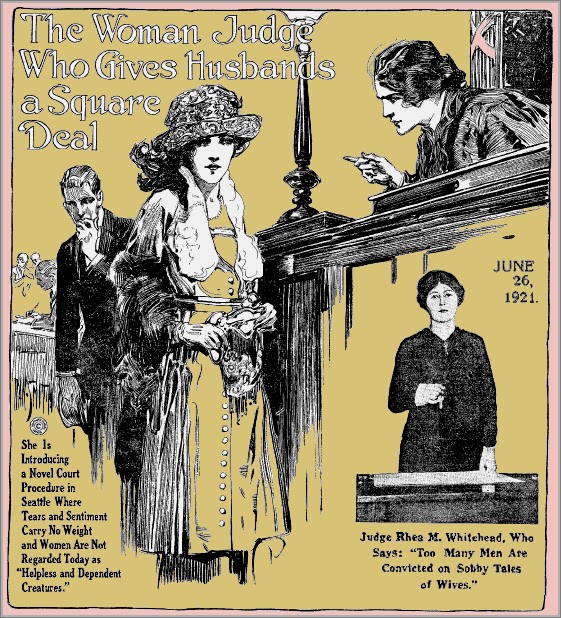 FULL TEXT: Every dog has his day and even that of the poor, overburdened, wife-ridden husband appears to have arrived at last. The time-honored combination of a woman’s tears and a sympathetic masculine judge has been shattered. A woman is the iconoclast. She is Judge Rhea M. Whitehead, presiding member of the Superior Court of Seattle.

“A husband is going to get a square deal in my court,” she announced to the world. “Too many men are convicted on sobby tales of wives!”

The condition which this learned woman jurist deplores can be seen anywhere in the country in any court where domestic woes are aired, some husbands aver. The scene and the setting are identical, they say. The husband is arraigned before the court. His wife, her relatives and friends occupying the front benches, steps forward.

The complaining wife unburdens herself. Occasionally she may punctuate her recital with looks of injured feelings vaguely cast in the direction of her recalcitrant spouse. Then, having skilfully constructed her atmosphere much as a dramatist leads to a climax, she suddenly produces her handkerchief, clutches the railing before her, lets forth a heart rending sob and opens the flood-gates of her tears. Thereupon the Court thunders forth a denunciation of the prisoner at the bar and enters an order of commitment or fine or alimony, as the case may be, and all the men on hand applaud in their hearts and cry out that here is a just judge and a rascally husband. 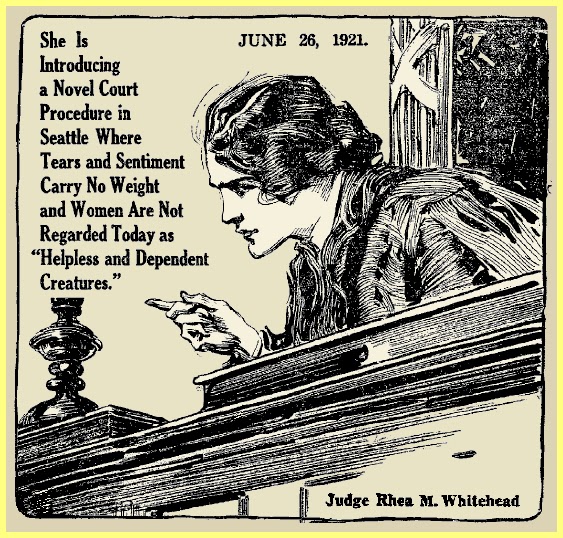 Since men were first called to sit in judgment of their fellow-men decisions of this kind have been heard of frequently. It is problematical whence the idea came. It may have arisen from a distorted sense of chivalry commingled with sympathy and what might be frankly defined as the hope of favor. It is the thing that kept men and women apart in the business world for centuries. Their association in offices and the breaking down of stern conventions explain the dictum of the woman jurist of Seattle as merely a natural sequence.

“In my court,” declares Judge Whitehead, “men and women will stand equal. That a woman is a dependent, helpless creature is an outworn notion, and I have absolutely no patience with a woman who comes into my court charging her husband with non-support merely to have the law make him stand and deliver. Some masculine judges are so sentimental that they often enter judgments against husbands without even giving the defendant a chance to be heard.”

Judge Whitehead is not the only woman jurist who holds the attitude that “playing the sex” is no business for the courtroom. Judge Florence E. Allen of the Court of Common Pleas, Cleveland, Ohio, speaking before the Women Lawyers’ Association, deplored the tendency of men jurors to render verdicts in favor of women litigants on sentimental grounds, whether the woman be the accused or accuser. It recalls the famous instance in New York City where the court ordered a curtain draped in front of the shapely ankles of Betty Inch. Because the men jurors seemed to concentrate their attention on the tears rather than on the testimony.

“This fault should be corrected,” Judge Allen says. “It is not born of chivalry, but of what men choose to call chivalry, something totally different."

“Criminal men take advantage of this condition. They use women to perform acts essential to crime, counting on a woman to serve both as a screen and as a blind. They figure that if she is arrested she will be acquitted and that would weaken the case against them.” It is quite true that all men – lawyers, judges, prosecuting attorneys, witnesses and jurors – are inclined to be lenient with a woman on trial or in any way connected with a case. The leniency is not deliberate, but instinctive. Pretty women are all too likely to make men lose their balance.”

Max Herzfeld, a lawyer, of New York City, who framed the law by which the famous “Alimony Club” was wiped out of existence by making it lawful for a woman to have her husband arrested and committed to jail as many times as he fell behind in the payment of alimony installments, declared that the views of the women judges were most encouraging. Before Lawyer Herzfeld had the law changed a man became immune to arrest for non-support after he had spent thirty days in the “Alimony Club” in the civil prison.

“The attitude of these women jurists is a step forward,” he said. “At the present time I am urging Mayor John F. Hylan of New York City to appoint a committee to act as arbiters of domestic difficulties. In my opinion there are many cases of marital discord which could be patched up by keeping them out of court. A court is a court whether it is a domestic relations-tribunal or not. It has the flavor and also the opprobrium. Women go before a judge, become hysterical, permit their imaginations to run riot and the damage is done. Reconciliation becomes remote. And the husband hasn’t a chance when the excited wife begins to weep. I  advocate that this committee be formed where women’s tears would not be effective nor necessary, but where proceedings without publicity could settle the differences and send the quarrelsome couple home together. It is the instinctive prejudice that men feel toward a woman’s court that embitters a man against his wife who has him apprehended, because he fears that he cannot even hope for a fair and impartial judgment."

[“The Woman Judge Who Gives Husbands A Square Deal – She Is Introducing a Novel Procedure In Seattle Where Tears and Sentiment Carry No Weight and Women Are Not Regarded Today as ‘Helpless and Dependent Children,’” syndicated, Fort Wayne Journal-Gazette (In.), Jun. 26, 1921, sec. 4, p. 1] 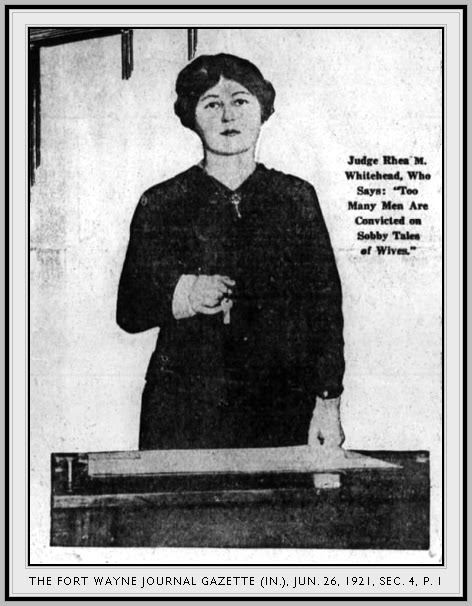 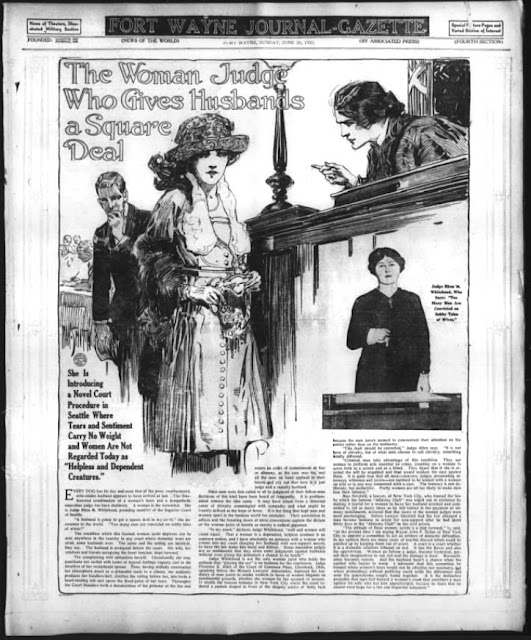