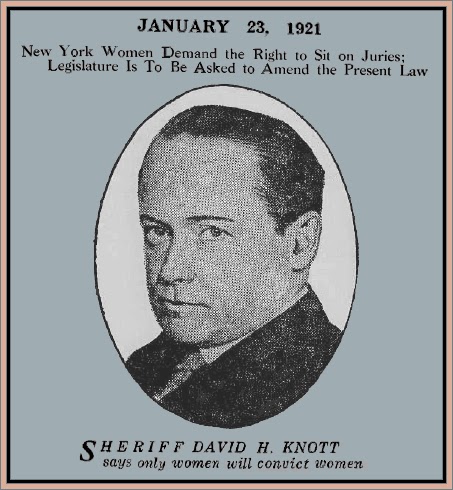 Sheriff David H. Knott, whose duty it is to summon juries, is, on the other hand, very strongly in favor of this plan. It is necessary to have women jurors to convict women accused of some crimes, he asserts, and continues:

“I could cite many examples where women accused of crime are allowed to go free because the attorney for the defendant will play on the sympathy of the men jurors. A year and a half ago in the criminal branch a woman was accused of certain crime before Judge Weeks. We were all absolutely positive that she should have been found guilt and sent up for five years. She was tried twice before a men’s jury, the first time ending in a disagreement and the second time pronounced not guilty. A women’s jury would probably have found her guilty. Woman to-day can commit murder and it almost impossible for the District Attorney to convict her because her sex. Look over the famous cases of women accused of crimes in civil actions. Women to-day are in business and in most all walks of life. They need protection, justice and the absolute disregard of sympathy so that the case can be tried strictly its merits.”

“Another reason. Women want equal rights with men. Now that they have the vote, they should have equal privileges and responsibilities in all branches of government.”

“Commissioners of jurors and sheriffs should be allowed to excuse from jury duty all those women cannot afford the time to attend – as for instance, mothers of children who need a mother’s care, and nurses on duty, and in all other vocations where loss of money, prestige, etc., would endanger livelihood.”

“Jury service is one of the most important parts of our government and should be considered not on privilege but an honor.”

“A jury of both men and women would more clearly understand a case, and I think would prove much more superior in many cases than a jury of men only.

“I believe that I could swear in a woman as a juror even under the present law, if I so desired, especially if I could get the lawyers in the case to agree,”