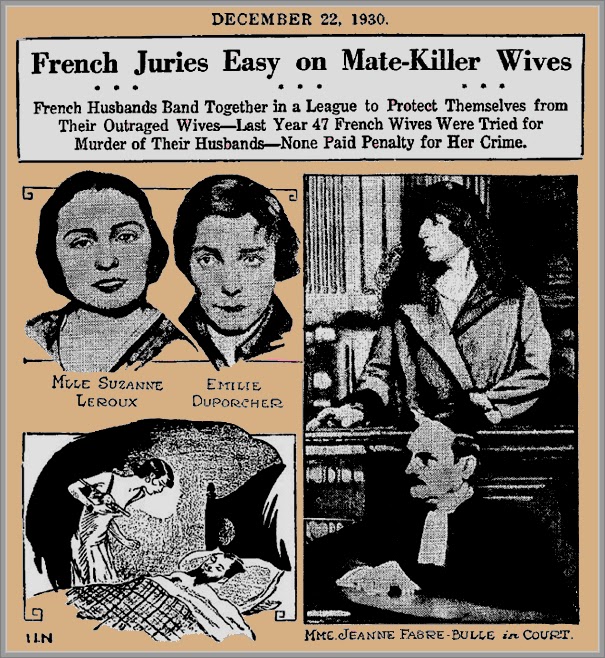 French husbands band together in a league to protect themselves from their outraged wives – last year 47 wives were tried for murder of their husbands – None paid penalty for her crime.

FULL TEXT: Paris, Dec. 22—Faithless husbands and lovers in France haven't a chance. They are entirely at the mercy of their women. If the ladies decide to kill them, the law will not punish the femmes. The French woman who has murdered her husband or her lover smiles through her tears at the jury and she is acquitted.

Last year 47 French wives were tried in the Assize Court for the murder of their husbands. Not one of these vengeful ladies paid the supreme penalty for her crime. This year, to date, 37 husband killers have been released without even a short sentence.

Judges protest, but French juries continue to acquit women who have killed their husbands because their married life was unhappy.

Of course, the French woman who looks to the future will provide a dramatic moment in which to snuff out. With a view to give the jury their money's worth, the French wife holds up her snuffing-out act until her husband is in a bombastic mood. They prefer this means to the divorce court exit.

A lovely example of a husband extermination via the shot-gun route, rather than the divorce court, is that of Mme. Leontine Desotrat. The couple lived in the suburbs and her husband feared burglars so much that he kept a loaded revolver under the pillow every night. Leontine was so much afraid of the revolver that she refused to move it in the morning. So her husband gave her shooting lessons. Every day in the garden he would drill her in the loading, pointing and firing the weapon.

Very, very soon, she lost her fear of the revolver. She lost it so completely that on the seventh day after receiving her lesson she followed her husband into the house and fired seven shots, one after the other, into his head. At the trial, this poor wife shed a few pathetic tears and looking frail and sorrowful in her heavy mourning, told the jury of her husband’s ferocious cruelty. She didn’t remember what she had done. The jury sniffed and cleared its throat and the lovely Mme. Desotrat was sentenced to five years and ordered to pay 100 francs damages.

More spectacular was the trial of  Mme. Jane Weiller. Robert Weiller was her third husband. One night the two had been having an especially wild night of it. They had taken in a number of night places and flung themselves into the drunken gaiety with an abandon that was almost hysterical. When they came home, Jane shot her husband in the quiet of their drawing room. Then she called in the police.

The trial was revolting. It was too much for even a French court. But the verdict was one hundred francs and five years in custody. But like most women who find themselves in difficulties of this kind and their stories in public print, Jane Weiller was besieged with marriage offers. Perhaps when she is freed in 1935 she will make a wiser marital selection.

At present Paris is reading the morbid testimony in the trial of Mme. Emilie Duporche, the bobbed-hair lady who killed and buried her husband in the garden – with the help of her lover. At the same time, Mme. Suzanne Fabre-Belle [sic: Jeanne Fabre-Bulle], wealthy society woman, is being tried for the murder of her lover.

These ladies will – at the worst – get a few years in jail and a small fine, but they may be freed. That is always the great possibility in France.

And so the Liga fuer Menschenrechte [sic; this is not the correct name], with headquarters in Vienna, is being deluged with letters from French male citizens who are generally convinced that it is no longer a matter of protecting the fragile sex against masculine intrusion, but quite the reverse!