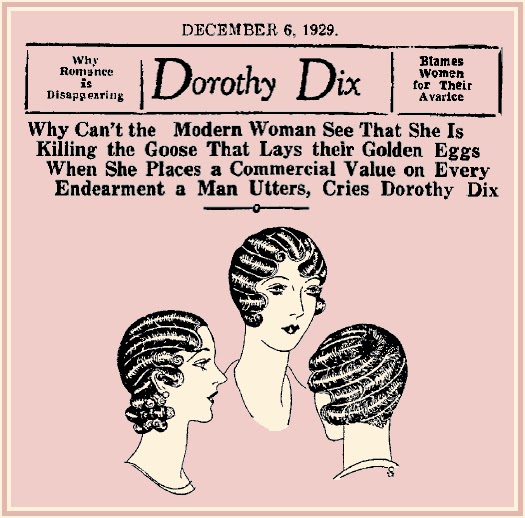 MGTOW (Men Going Their Own Way) is a term coined in the 2000s to describe the deliberate retrenchment of men who recognize that cultural misandry has rendered the romantic landscape a legal and financial minefield. Yet the abuses of out-of-control female privilege as exploited by the all-too-common predators, narcissists and sociopaths of the fair sex has long been recognized as is evidenced from the 1929 article presented below.

NOTE: Author Dorothy Dix was the Oprah of the 1920s-1930s. She was the most widely read advice columnist of her day, with her writings syndicated in newspapers across the globe.

FULL TEXT: I often wonder that the modern woman does not perceive that she is killing the goose that lays the golden egg by her attitude toward men. By which I mean to say that it is women themselves who are destroying the things that they value most in life. It is women’s hands that are tearing to tatters the chiffons of romance and sentiment and idealism in which men have always clothed them. It is women who are stifling tenderness and slaying chivalry in the hearts of men. It is women who are doing away with all the graces and sweetnesses that made charm in the relationship between men and women and that incidentally lured men into matrimony.

For women are making men afraid of them and what they will do to them and that makes men cold and cautious in dealing with the fair sex. Even Romeo watches his step and counts the calories in his sweet talk when he keeps a date with Juliet nowadays.

Women don’t like this. They complain bitterly that there are no impassioned lovers. They say that young men are so afraid they may compromise themselves by their attentions to a girl that ten minutes alter meeting her they serve notice on her that they have no intention of marrying and that even one’s fiance’s letters read like a communication about the state of the stock market instead of being an outpouring of burning affection.

And women don’t seem to see that they are to blind for this state of affairs und that the reason for it is because they have taken love and lovemaking and even marriage out of the realm of sentiment and pinned a price tag on them and commercialized them. They have made men pay through the nose for romantic dalliance and idle words said on a moonlight night, and that is why Dan Cupid, who is no bill collector, has packed up his arrows and fled the scene.

Thus have many women been cut out of the pleasure and excitement of playing the love game, for no man dares take a hand in that now unless he is ready to pay up if the lady calls his bluff.

In our mother’s time it is doubtful if there was any woman so unattractive that some man at some time didn’t whisper soft nothing in her ear and tell her what beautiful eyes she had and how different she was from all other women and how the first time he ever saw her he felt that she was the only woman who ever really understood him and how sweet life would be if he could have such a woman as the by his side and who didn’t send her gooey songs and slushy poetry.

But now it is a common thing to have an attractive woman in her 30s or 40s tell you that she never had a beau in her life and that the nearest approach to sentiment she has ever heard from any man is when her boss said: “Miss Pothooks, you certainly are a peach of a stenographer and I don’t know how I would get along without you.”

The reason for this is, of course, that men are afraid to make love to a girl unless they are prepared to lead her to the altar. For over their heads dangles the sword of the breach-of-promise suit. They have seen Juliet cashing in too often on Romeo’s unguarded vows to take any chances themselves.

Now, of course, every woman yearns to be deeply and truly loved and to feel that some man is mad about her, but synthetic love is better than no love at all, and every woman would rather have been philandered with than to have been passed over entirely. The flirtations give her a tag end of romance at least to tuck away in her memory and to keep her from feeling that she was wholly lacking in attraction to men.

Also, man, women who have good jobs with fat pay envelopes and who are interested in their business or professions don’t want to marry, but they do enjoy the society of men, which they might have if the predatory women hadn’t made feminine companionship such a hazardous and expensive luxury for men to indulge themselves in.

And there is the matter of love letters. Men used to pour forth their souls to their souls to their lady loves in beautiful poetic letters that were like the beating of a heart in one’s hand. There are love letters that have come crown through the ages to us as gems of literature, and in the old days every woman had packets of love letters, tied with blue ribbon, hidden away among her treasures that she took out and read when she was old and that brought her girlhood flooding back upon her once more. Grandma wore grandpa’s love letters under her laces on her breast.

But the love letter has become as extinct as the Dodo. The modern youth when, away from his sweetie communicates, with her by radio or wireless or telegraph or he dictates it to a stenographer, and if the modern girl should put her steady’s letter above her Heart she would think she had an ice pack on and get a chill.

Why? Because women have made men afraid to write love letters. They have seen too many people snickering as they read some man’s impassioned maunderings in the newspapers and they know none but tae foolhardy put down in black and white on paper the sentiments that seem so sweet and noble when they are written and that sound such idiotic twaddle when they are read aloud in court or appear in print.

Worse still, women are keeping men from marrying by demanding so much alimony that it makes matrimony not only a gamble in happiness but the most risky financial speculation they can engage in.

Under the present laws a man can marry a girl who makes no effort in any way to be a good wife. She can refuse to keep house, refuse to bear children. She can be lazy, extravagant, high-tempered, nagging and make his life a torment to him, yet she can force him to support her as long as he lives. And, such being the case, it is not strange that prudent men are shying of more and more from the altar.

These are facts which I respectfully submit to my sister women. And I would also call their attention to what happened to the greedy woman who killed the goose that laid the golden egg.

[Dorothy Dix, “Why Can’t The Modern Woman See That She Is Killing the Goose That Lays the Golden Eggs When She Places a Commercial Value on Every Endearment a Man Utters, Cries Dorothy Dix,” syndicated, The Bee (Danville, W. Va.), Dec. 6, 1929, p. 12; illustration is taken from an ad appearing on the same page]