A Flogging for a Domestic Violence Offence: John Barbieri – Delaware 1952 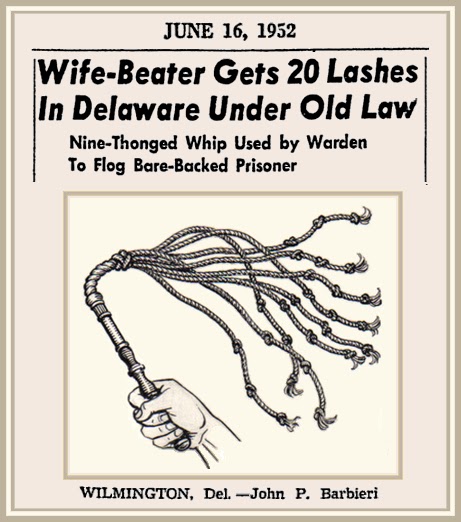 Barbieri, sentenced to the flogging after he pleaded guilty to beating Mrs. Belle Davis, 59, last April 18, made no outcry during the 45 seconds it took to carry out the sentence.

He walked from a small shed after the flogging to the prison infirmary where he a patient “for a day or two” while his bruises are treated. Then he will begin a six-months jail sentence.

There was no blood drawn during the lashing by Warden Elwood Wilson, who delegated himself to the unpleasant duty of inflicting the lashes.

Mr. Wilson, who explained to reporters that “you can cut a man in two with this whip” said the flogging was made as “humane as possible by starting at the shoulders, working down to the waist and then up again” to avoid tearing at any particular.

Only 20 persons, including an official party of six, were present as he was shackled to angle irons in a small shed and the sentence of the court read to him.

Wilson then stepped forward and administered the lashes … straight-armed, without bending the elbow, with a whip of nine half-inch flat leather straps attached to half a broom handle.

Barbieri sagged several times as the lashing continued. Then he was led to the workhouse.

Some welts and bruises were apparent as he was led away.

Those present included the Rev. F. Raymond Baker, pastor of Second Baptist Church of Wilmington. He made no comment.