“A Lesson in Court” for a Domestic Violence Offender - Pennsylvania 1898 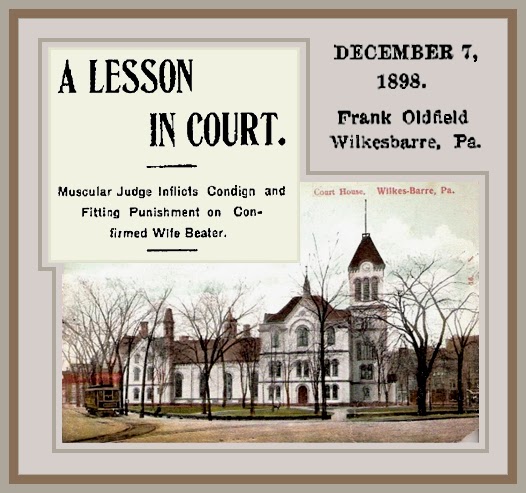 FULL TEXT: Wilkesbarre, Pa., Dec. 7 – Alderman John. F. Donohue of this city gave a  wife-beater a remarkable lesson. As a result the man. has two black eyes and is badly bruised about the face and body. The wife-beater is Frank Oldfield, who weighs 170 pounds and was brought from Plymouth by a constable. “You’ve been up for beating your wife a dozen times,” said the alderman, when Oldfield appeared. The latter said it was a few more times.

“Well,” said Donohue, “it won’t happen again if I can help it. There’s only one way to deal with such cattle.”

Oldfield was compelled to take off his coat, and the alderman took off his coat and cuffs. Then he pulled Oldfield out of the prisoner’s pen, sent two constables to keep the door shut, cautioned the spectators to remain quiet and then told Oldfield to defend himself.

Donohue opened the battle by knocking Oldfield, down with a right hand blow in the face. The prisoner arose and tried to retaliate, but the alderman rained blows on him with precision and force.

Twice more Oldfield went down, but arose. Finally he clinched, only to be thrown heavily. Then he rushed for the door, but the cheering spectators threw him back. He clinched again and both men fell. Donohue got on top and ignoring all ring rules, punched the prisoner until he promised never to beat his wife again.

As Donohue resumed his coat, another wifebeater. David Rowlands, cowered in the prisoner’s pen. The alderman asked him if the object lesson was not a good one. Rowlands agreed tremulously and was discharged.