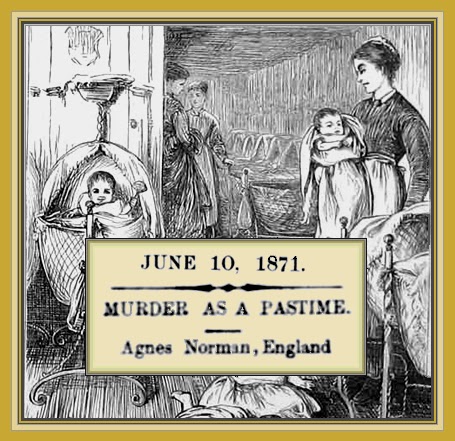 FULL TEXT (Article 1 of 7): At the Lambeth Police Court a person named Agnes Norman was brought on a charge of wilfully murdering a child of fourteen months old. This extraordinary girl, who is either insane or one of the greatest monsters of the age, was nurse in the service of the parents of the child, Mr. and Mrs. William Beer. She first went to them on the 4th of April. On Good Friday Mr Beer and his wife went out, leaving their three children in perfect health, in the care of Agnes Norman. On returning home they found the youngest girl in her bed, quite dead. The second child was screaming violently and was lying on the ground as if he had fallen out of bed. The nurse-girl was apparently asleep in a chair. The doctor declared that death was caused by compression. Such a murder would seem so improbable that at first there was scarcely a suspicion of the girl’s guilt, but it was soon ascertained that when Agnes Norman lived in other families two children of Mr Milner and one of a Mr Taylor lost their lives in the same sudden way, and she is now charged with their murder. There was a remand for further evidence.

FULL TEXT (Article 2 of 7): The girl Agnes Norman, who is in custody on suspicion of having murdered several children, was again brought up at the Lambeth police-court yesterday. Besides the infant daughter of Mr. Beer, it was proved that two infants, named Gardener and Taylor respectively, had died while under the prisoner’s care. Mrs. Milner also stated that while Norman lived with her two children, aged respectively two and a half years and ten months, died suddenly, and an elder child remained insensible for several hours. Charles Parfitt, eleven years of age, deposed that Norman had attempted to suffocate him in the night-time. She was again remanded.

FULL TEXT (Article 3 of 7): A girl named Agnes Norman, a nursemaid, is under examination at the Lambeth police-court on a most extraordinary series of charges. The theory of the prosecution, which has been instituted on behalf of the Treasury, is that this young woman is a connoisseur in murder, has murdered five children in succession, and tried to murder a sixth, and that while in service she was constantly killing canaries, dogs, cats, and so on. The evidence is as yet incomplete, but there seems reason for the suspicion that we have here one of those strange cases of homicidal propensity which the world now-a-days explains on a theory of madness.

FULL TEXT (Article 4 of 7): Agnes Norman, the juvenile murderer who has lately been arrested in England for killing an infant entrusted to her charge, appears to have found a strange delight in taking life. Two or three children, a dog, two cats, six or eight birds, and some gold fish, had all fallen victims to her unnatural propensity for destruction before her crime was discovered. One little boy, aged eleven years, testified that one night he awoke by feeling something hurting him, and upon looking up found this delectable young woman, who lived as a servant in the same house, stooping over him with one hand on his mouth, and the other tightly grasping his throat. Not relishing such treatment the little fellow cried out, upon which the girl relaxed her hold and bribed him with “sweeties” not to mention what had occurred.

The records of medical science prove that a mania for destruction is not an unknown form of insanity, and plenty of instances are given in which persons who were in other respects perfectly sane felt an intense delight in scenes of death and suffering. An account in given in the Annual Register of a young woman employed in London, who daily subjected her little charges to a regular process of torture, not by way of punishing them for any offence of which they had been guilty, but simply for the gratification of her own fiendish tastes. We have never seen any attempt made to explain the cause which leads to such a horrible phase of mental depravity. In most cases, however, we imagine that it originates in the indulgence of little acts of petty spite and revenge, and that little by little a longing to destroy and to give pain, instead of a desire to perform kindly acts, obtains the complete mastery until murder becomes a passion, as in the case of this miserable girl. It is not by any means a pleasant matter to dwell upon; indeed there is something unusually repulsive in the idea of a woman taking a pleasure in tormenting and destroying the innocent little children who were confided to her keeping; still if, as we think it does, her case serves to exemplify the terrible consequences which may follow from giving way in early life to unkindly and inhuman instincts, it is worth taking note of and bearing in mind. 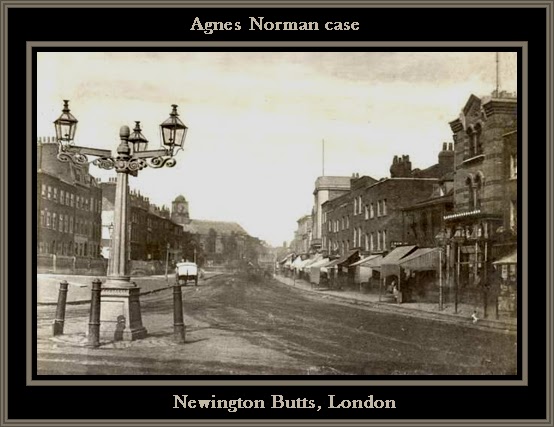 FULL TEXT (Article 5 of 7): The sentence of Agnes Norman, at London, to ten years’ penal servitude, recalls the remarkable story of her crimes. She was sentenced merely for having attempting to strangle a little boy named Parfitt; nut this deed was only a moiety of her numerous actions. She was accused of having murdered children in various houses in which she had been maid servant; and it was also stated that her mania for killing extended itself to parrots, dogs and other animals. What is definitely known is that certain, whom she had under her care, died suddenly and without apparent cause, and that the mothers suspected her of having smothered them while in bed. The jury, however, acquitted of her on all the charges except one, not deeming the evidence sufficient in the others; and she is now reaping the penalty of having attempted to murder a child, who was fortunately rescued. The case is one of the most curious on record. She is but fifteen years of age, and must have commenced her peculiar line of operations when much younger. None of the ordinary motives of cupidity or revenge woulds seem to have influenced her, and still it can hardly be said that she is insane. She is, at least, perfectly sane on every other subject. Be all this as it may, the fact remains that this young, quiet, mild-mannered girl spent her time in going about slaughtering boys and girls, and birds and small animals, in the most calm and gentle manner imaginable; and the additional fact remains that she will do so no longer, for ten years at least.

FULL TEXT (Article 6 of 7): Agnes Norman was, on August 14, sentenced to ten years penal servitude for having attempted to strangle a little boy named Parfitt; and so ends one of the strangest stories of crime which have ever found their way into our criminal records. It will be remembered that this girl was accused of having murdered children in various houses in which she had been maid-servant; and it was also stated that her mania for killing extended itself to parrots, dogs, and other animals. What is definitely known is that certain young children whom she had under her care died suddenly, and without apparent cause; and that the mothers suspected her of having smothered them while in bed. The jury, however, acquitted her on all charges except one, not deeming the evidence sufficient in the others; and she is now reaping the penalty of having attempted to murder a child who was fortunately rescued. It is obvious, however, that this girl presents one of those curious phenomena with which our jurisprudence finds it difficult to deal. None of the ordinary motives of cupidity or revenge would seem to have influenced her; and one is naturally led to ask how a mania of this kind is to be distinguished from that of insanity, which relieves its victims from responsibility. In other directions, it is true, Agnes Norman would seem to be sane enough. There is something, how ever, very horrible in the notion of an apparently quiet girl going about a house in the character of an assistant domestic, with her thoughts perpetually turning on the possibility of killing something. Will ten years’ penal servitude cause the leopard to change its spots? 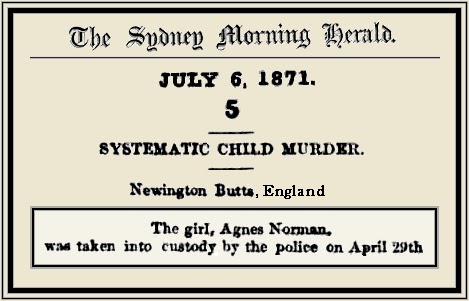 Newington Butts is a former village, now an area of the London Borough of Southwark, that gives its name to a segment of the A3 road running south-west from the Elephant and Castle junction. The road forks left into Kennington Park Road and right into Kennington Lane, leading to Kennington and Vauxhall Bridge respectively. It is believed to take its name from an archery butts, or practice field. The area gave its name to an Elizabethan theatre which saw the earliest recorded performances of some Shakespearean plays. [Wikipedia]

Modern mentions of the case:

Stephen Jakobi, In the Mind of a Female Serial Killer, 2016, Pen and Sword History, UK. 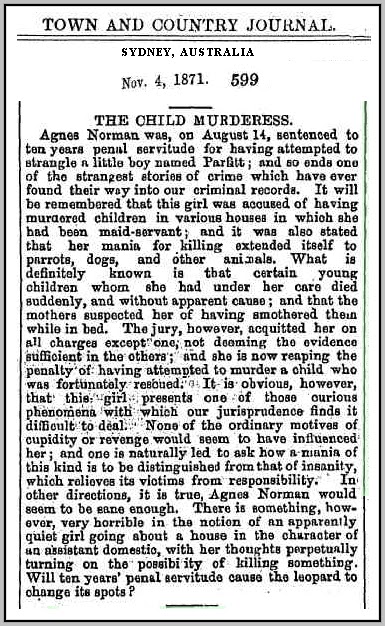 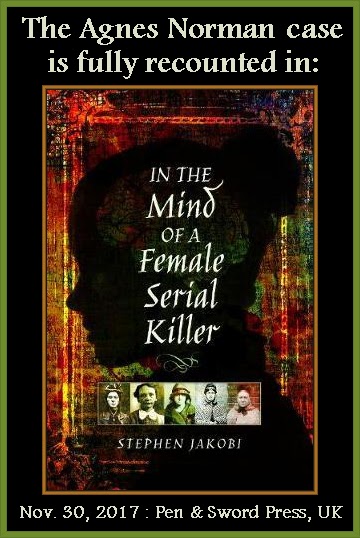