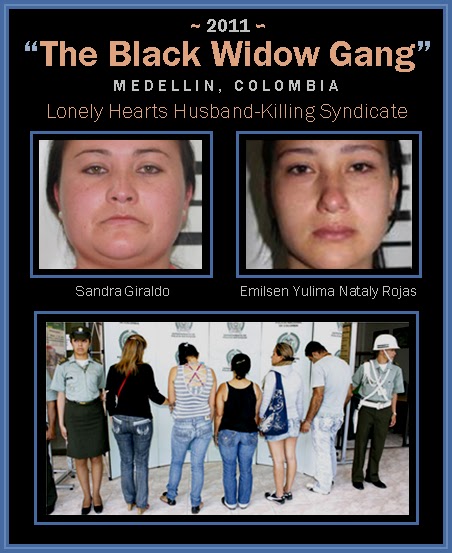 This husband killing syndicate discovered in 2011, based on life insurance fraud is structured similarly to the Philadelphia, Pennsylvania-based “Arsenic Incorporated” murder conspiracy of the late 1930s.

SEE: Husband Killing Syndicates for other similar cases dating back to 1658.

The criminal operation known as “Black Widow Gang” was dedicated to deceiving men to marry them (with women in the criminal organization) and buy life insurance and then kill the men and collect the policy proceeds, began to be dismantled.

The condition was to legalize a marriage or cohabitation and purchase life insurance for amounts between 100 and 800 million pesos. After the nuptials, were taken from the "honeymoon," then killed, trying to make it look like an accident. On September 28, 2008  Diego Hernandez, 60, was found drowned. He had been thrown into the reservoir The Peñol-Guatapé (eastern Antioquia). 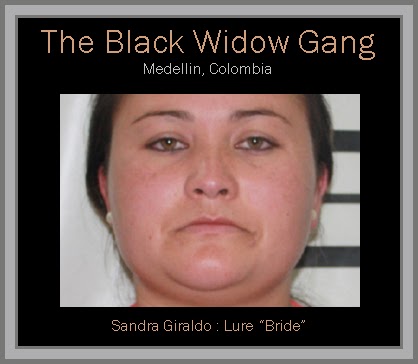 The body was claimed by the wife who claimed to be a 18 year old, Emilsen Rojas. On January 27, 2009, Rojas claimed the life insurance. The sole beneficiary of the 150 million pesos was her. The slip-up that led to the gang’s discovery was committed by Sandra Giraldo, alias 'Chuki', 24, who claimed insurance for 800 million, following the drowning death of her husband, Julián Muñoz Romero. After 20 months of follow up investigation, the police corroborated what insurers suspected: the existence of a dangerous gang.

According to investigators, with income from his criminal business, Cataño Mauro Gomez, whom police believe to be Capo of the gang, had rented properties in three exclusive neighborhoods of Medellin and two late model cars. He traveled several times to the United States and Venezuela, dressed in designer clothes and wore expensive jewelry. Consequently the authorities suspect that the cases of Diego, Jairo and Julian are just the tip of the iceberg and many more "missing links" are to be discovered in other regions of the country. 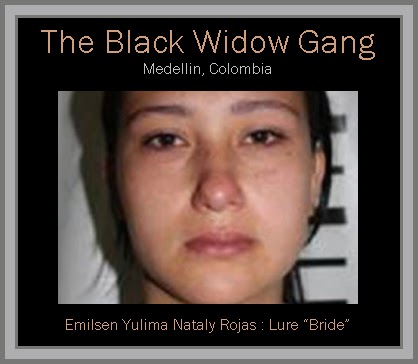 It was the same with their “partners” and, above all, with the 'widows'. Sandra lived in a poor neighborhood and Emilsen Marinilla had a small house in the neighborhood Manrique of Medellin. The female lure “brides” got much less of the cut than Gomez, but were nevertheless protagonists in the brutality and evil acts of the black widow gang.

As of June 20, 2011, three detainees had been placed in jail to await trial, where they will have to respond to the charges of conspiracy to commit the crimes of aggravated homicide, attempted homicide, illegally carrying firearms, and fraud.

They are also being investigated by authorities for five other homicides that have taken place in Antioquia under similar circumstances. 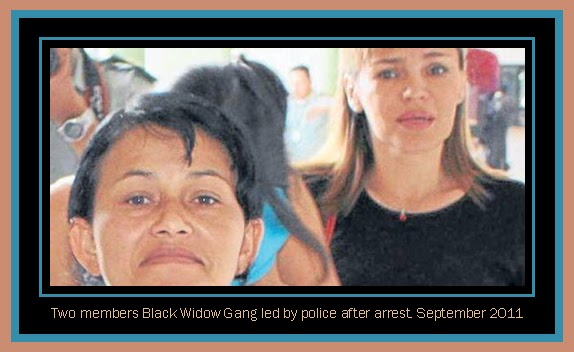