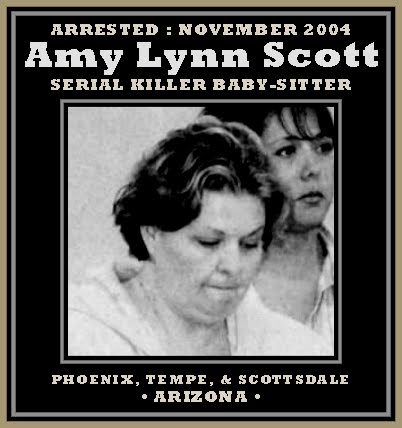 Amy Lynn Scott, babysitter, was arrested in Georgia and extradited to Arizona and indicted there by a grand jury in 2004 on charges of murdering three of the children who had died in her care in 1989 in Florida: Shauna Cunnington, 2 months, of Phoenix; Zachary Mann, 8 months, of Scottsdale; and Jordan Whitmer, 4 months, of Tempe. She was found guilty March 7, 2007.

The three infants died within nine months of each other. Scott met all of the babies’ parents at The Church of Jesus Christ of Latter-day Saints, 2202 N. 74th St., in Scottsdale.

New autopsies had been conducted in 2002 by the Maricopa County, Georgia Medical Examiner who found that Jordan likely died of “compressional asphyxia,” or being suffocated by a hard squeeze. Zachary’s death was suggestive of suffocation, he wrote, and suffocation couldn’t be ruled out in Shauna’s death. 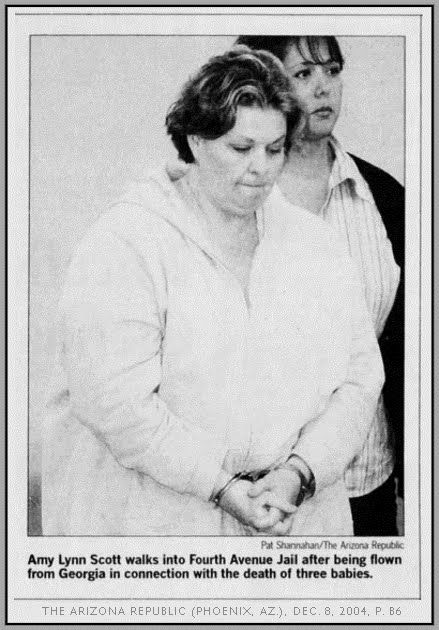 FULL TEXT: Amy Lynn Scott told the mother of one of three babies she is accused of killing that she saw herself as an “instrument” to guide people to the next life, a police report says.

A Tempe police report released Thursday said the baby-sitter doesn’t remember what happened when the children died and has suffered through “some really bad mental times.”

But after Rachel Whitmer’s baby - the last of the three - died, Whitmer remembered Scott telling her in 1989, “I had seen a lot of death in my life and that I feel that I am an instrument to help people, spirits, go to the next life.”

Whitmer recounted the quote to police in 2003 after they began investigating the case again.

Scott, 37, is charged with three counts of first-degree murder in the case of two Valley boys and a girl whose deaths were initially attributed to sudden infant death syndrome.

Two years ago, after a new detective inherited the case, the Maricopa County Medical Examiner’s Office changed the causes of death for all three babies, ruling that the boys likely were squeezed so hard they suffocated, and the office couldn’t rule out suffocation in the girl’s death.

A Tempe detective used the changed cause-of-death ruling and new interviews to persuade prosecutors to file charges. Scott was arrested in November.

Her attorney declined to comment until he sees the police report.

“Once we receive those we will investigate every aspect of the case,” Greg Parzych said.

According to the report, numerous discrepancies emerged in the accounts Scott first gave police of the children’s deaths. Among them:

• Jordan Whitmer, 2 months, died Oct. 25, 1989 at Scott’s apartment, she admitted to detectives in 1989 after being confronted with evidence. But that day she called his mother and asked her to come home early from work and meet at the Whitmer house because she felt sick. Scott put Jordan in his crib and never told his mother he was already dead. His mother checked on him when Scott left and found him blue, stiff and cold.

Scott denied leaving him dead when asked about it in 2003, and told detectives she was “a scared little girl” at the time and didn’t want to be blamed for another death.

• Andrea Cunnington, the mother of 2-month-old Shauna, the first victim, said she was too emotional in February 1989 to dress Shauna in her baptismal gown and pink diaper for her burial.

Scott offered to do it, and later told Cunnington that Shauna was lying on a table with a bag of her own organs on her chest. Scott claimed she put the bag inside the baby’s chest and sewed it shut. The funeral director later said that would have been impossible.

She was treated at a mental health clinic for several days as a teenager when she was suicidal, she and her mother told police.

She moved to Washington after graduating from high school and met Seth Scott. They were eager to start a family and married in 1988, he said in interviews with police.

In December 1988, two months before Shauna died, Scott miscarried twins. She stayed in bed crying a lot because they wanted children so badly, he said.

They eventually would have four children before the couple’s marriage dissolved by March 1993.

Amy Scott took their fourth child to the hospital when she was four days old because she had seizures and she stopped breathing, according to hospital records and interviews cited in the police report. The girl stayed for 10 days, but doctors found no cause for the illness.

The child now suffers developmental problems. Scott blames the problems on abuse from her ex-husband, according to Scott’s roommate.

Amy Scott moved in with Lee King, a co-worker, about eight years ago. The two women lived together in Georgia near a military base where King worked.

King said Scott suffered from depression, but was a wonderful mother, baby-sitter and church leader for children.

“She has a natural instinct, just, like the children she watches now, she is one to pick up on when there is something wrong with them,” King said.

Tempe Detective Tom Magazzeni, who inherited the case, flew to Georgia to interview Scott in early 2003.

He asked her about the statements she made to Whitmer just after her son Jordan’s death.

Scott denied being an “instrument” to anyone.

At the end of their conversation, he asked if it was possible she was so angry at her abuse that she hurt Jordan.

Scott is expected in Maricopa County Superior Court on Jan. 24 for a hearing to reduce her $300,000 bond.

Jill Shumway, mother of the third victim, 8-month-old Zachary Mann, plans to oppose the motion. She thinks Scott’s bond is already too low.“

It’s just incomprehensible that a person could be capable of such a heinous crime,” she said. “A defenseless infant.”

Rachel Whitmer adds that she has thought long about what she would say to Scott, but hasn’t decided.She misses her smiling baby boy, Jordan, who was just starting to crawl.

He was every mother’s dream of a perfect baby. He slept all night. These are my memories of him.” 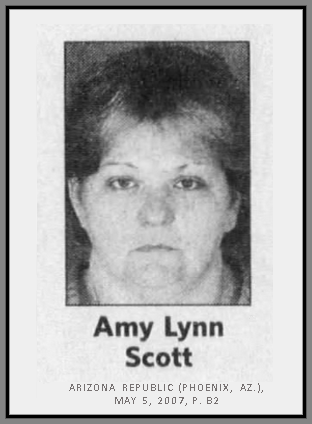 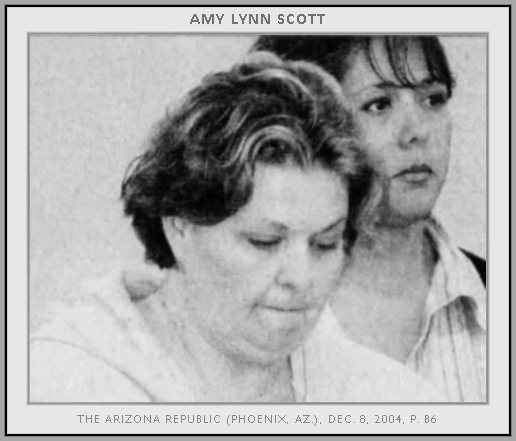