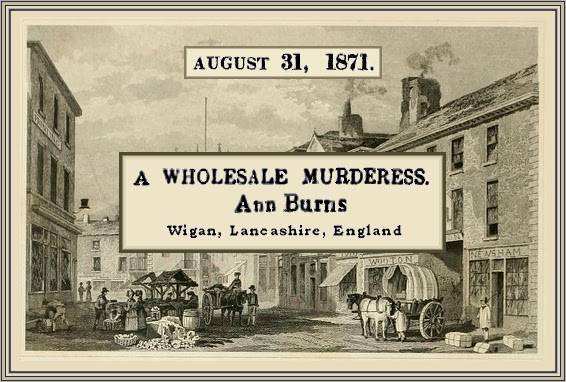 FULL TEXT: At Wigan, Ann Burns is in custody on her own confession of having murdered her stepfather twelve months ago. The chief-constable said the prisoner was charged with murdering an old man named Edward M’Gravey, with whom, along with her mother, to whom the deceased was married, she had lived for many years. It appeared that the prisoners had had five children; by her stepfather, and that some of them were actually born during the lifetime of her mother.

On Saturday morning the prisoner went to the police office and asked for the chief constable, to whom she made a confession, which be had reduced to writing. In this statement she said that she had lived a long time with her stepfather, and that many people believed her to be his wife. One, night, rather more than twelve months ago, she gave him some washing liquor mixed in his medicine, and about a week afterwards she bought a penny-worth of white precipitate. She did not give it him all at once, but twice gave him some in luke warm water, and made away with the rest.

About a fortnight afterwards the old man died. She was tempted to murder him because he was insured in several societies, and since his death she had drawn nearly £30. After his death she could not rest; “something” told her she must give herself up to the police, and at length she came. This statement, said Mr Simm, had been carefully read over to her, and she said it was all true.

Again she sent for him and said that she had not told him all she had done. She murdered her two children she had by M’Gravey about thirty years since. At that time, her mother (M’Gravoy’s wife) was living with them, and her mother knew about the children.

Since Ann Burns had been in custody she has caused considerable alarm to those who have her in charge. She has partaken of very little food, and though there is no appearance of excitement it is plain she is gradually sinking, She says she gets to sleep at all, and her appearance goes far to prove it.