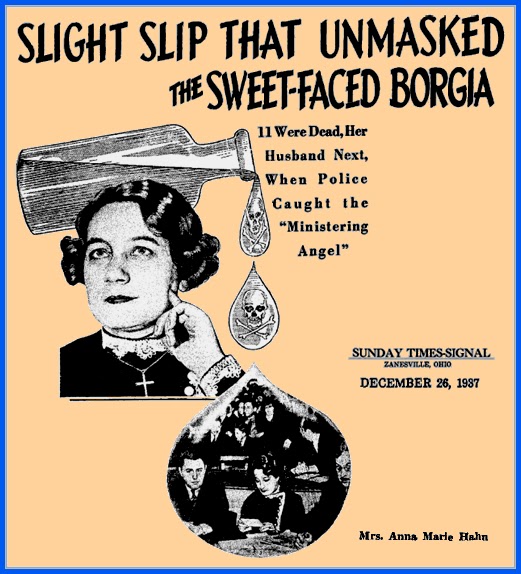 Anna Marie Hahn was indicted for two murders on August 16, 1937 in Cincinnati, Ohio. She was convicted by a jury of 11 women and one man on November 6, 1937 and executed on December 7, 1938. “Shackled by gambling debts Anna-Marie Hahn turned to the position of a live in attendant for elderly men. She stealthily poisoned each of her clients, tallying up more than ten murders in the span of five years.” [Source: Pinterst]

FULL TEXT: For centuries poison has been considered woman’s weapon, thanks no doubt to that Lucrezia Borgia who became so apt and wanton in its use that her name has carried its association for 400 years.

Lucrezia’s employment of this deadly and in her day often obscure method of removing enemies, was largely inspired by political motives: and altogether the use of poison to slay indicates murder of premeditation. Crimes of passion, of instantaneous impulse, are more often consummated by the knife, or pistol, or by whatever weapon may be at hand. Poison suggests slow, cold-blooded preparation, an utter absence of consideration for suffering, a slyness entirely foreign to heated passion wrought up to the killing point.

La Borgia’s nature, as characterized by historians, combined all these traits and contained as well the potent element of hate. In fact the passion of hate, whatever its variable cause, would seem to have been the inspiring motive of her crimes.

This daughter of riches had a poisonous counterpart in Catherine di Medici, Italian-born queen of France, but neither achieved the reputation of Mme. Tofania, who in the 17th Century made and sold a deadly poison that eventually was named for her, to wives tired of their husbands. She managed to elude police and carry on the traffic for more than 50 years. When taken at last, she confessed she had been a party to poisoning more than 600 people. When she was tried, it was recalled that a similar traffic was discovered in Rome in the time of Emperor Fabius Maximus, who ordered 170 widows to be executed at one time for thus disposing of their mates.

Through the centuries up to the present day, Central and Southern Europe has had a multiplicity of women poisoners. In Hungary, for example, in one year 25 women we’re executed for feeding lethal doses to their husbands; in another year 10 were executed for the same reason; in still another year, four.

From Central Europe comes Anna Marie Filser Hahn, though it was in Cincinnati she coolly ensnared her victims through sympathy, her attitude that of a willing nurse to the partially afflicted.

Mrs. Hahn styled herself an “angel.” She was but an angel of death. And her ministrations were the administrations of lethal doses of arsenic and croton oil to the aged objects of her “benefactions.”

And her motive was neither that of anger, nor hate, nor jealousy, nor passion of any sort; but merely the deliberate purpose of gain. Though her gains from her victims ranged from $200 to $2,000 each, police estimate her total “wages of death” between $50,000 to $75,000.

Mrs. Hahn, Bavarian born, a teacher in Munich, came to this country eight years ago at the age of 23; an attractive, blue-eyed blonde of engaging manner. Her first husband was left behind her. He died shortly after her arrival. She brought with her a son of four, and later married Philip Hahn.

No one but Mrs. Hahn herself knows when she first embarked upon her business of atrocity. Purchases of poison by her have been traced back as far as three years. It was only this past August that her misdeeds first came under suspicion and then only by accident. Mrs. Hahn was arrested for the theft of diamond rings and money from a Colorado Springs hotel owner. The investigation of larceny led almost immediately into one of murder, and the awful trail was soon disclosed.

Mrs. Hahn’s methods were crude, so crudely applied that she would scarcely have gotten away with her first attempt under any circumstances other than those which her sly craftiness supplied.

She sought out the lonely old men in the German-American section of the city; men without relative or even friends but whose German thrift ensured some hoard of money to care for their helpless days. She sought and found these men one by one. Some she nursed; to some she proclaimed relationship; with some her relations proceeded to such a point that she promised marriage; all she befriended in her winning, sympathetic way, gaining the confidence of each until a gift, a loan or a settlement was made, when the object of her attention shortly expired, arousing no suspicion because of his age. 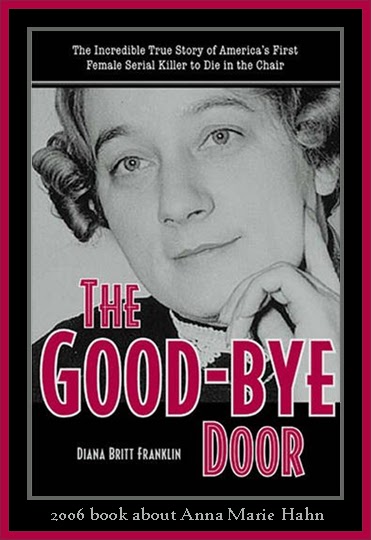 That was in July, and they went to Colorado Springs. Obendoerfer became so ill at the hotel where the three were stopping that Mrs. Hahn took him to a local hospital where he died. Mrs. Hahn returned to her home.

Colorado Springs police, in the first week of August, sent a routine letter to the Cincinnati department stating that Mrs. Hahn was wanted in connection with a theft at a hotel in the former city. Investigation of her recent trip there disclosed the fact of her association with Obendoerfer and the now suspicious circumstances of his death.

Detective Lieutenant George Schattle, of the Cincinnati force, an officer of resourcefulness and proven courage in many a hand-to-hand struggle with desperate criminals, was assigned to the case. Very shortly, Lieutenant Schattle was investigating the deaths of Albert Palmer, 72, whose volunteer housekeeper had been Anna Hahn; Ernest Kobler, 80, nursed by Mrs. Hahn; Jacob Wagner, 78, whose check in English script which Wagner could not write, was presented by Anna; and others to the total of 11 cases of fatality, four of illness and paralysis, all by poison cause, and all having had contact with Mrs. Hahn. There might have been another except for a lucky circumstance. 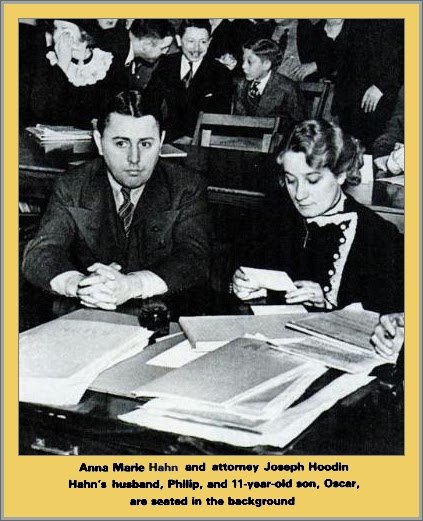 On her return from the Colorado Springs trip, Mrs. Hahn’s husband, on whose life she had twice unsuccessfully tried to get $20,000 insurance, quarreled with her over it. To dim the noise of the controversy, her young  son started to turn on the radio. There was an encumbrance, and Philip Hahn removed from inside it a bottle of deadly poison, which he took to his office and later turned over to the police.

The memory of Borgia and di Medici pale before the record of this woman who now awaits Ohio’s electric chair, the first of her sex to be fated to die in it.

Mrs. Belloc Lowndes, lifetime student of crime in many lands and author of “The Chink in the Armor,” “The Lodger” and other famous murder tales, maintains that secret, undiscovered murder by poison is not only of frequent occurrence, but is on the increase. She also insists that such type of crime is the easiest in the world to commit and get away with – providing it be a first murder.

“I believe” she says, “that every human being in the world – with the exception of ray two children but not excepting myself – is capable of murder, given temptation and opportunity in sufficient degree. ‘Opportunity makes the crime’ – how great is the awful truth in those trite words!

“And I believe that every criminologist would agree with me that secret murder is more practiced than was once the case It is a terrible but unquestionable fact that there is a great deal of secret poisoning going on nowadays. There’s arsenic in so many things we use. Even now it’s difficult to tell the difference between the effect produced by arsenic and a very ordinary ailment. A post-mortem only takes place if there’s already a reason to suspect foul play.

“Most of the secret poisoning is done by women, dreadful as it may seem. In the vast majority of cases the danger is negligible. The secret poisoner, especially if a woman, is never even suspected; or, if she is, the doctor may give her the benefit of the doubt.

“At least a dozen wives murder husbands,” continues Mrs. Lowndes, “for once the other way around. Love and hate burn with fiercer intensity in the average woman than in the average  man. Kipling merely told the truth when he wrote: ‘The female of the species is more deadly than the male.’” 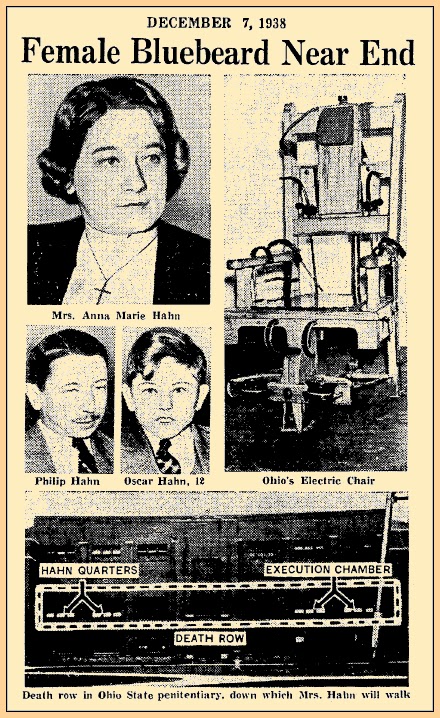 “Anna’s husband came forward to inform police that his wife had stolen the prescriptions from Dr. Vos, forged his signature on them, and then ordered the poisons from local druggists, sending her twelve-year-old son to fetch the prescriptions. Phillip Hahn said that Anna had twice tried to insure his life for $25,000 but that he had refused. He himself had been taken ill after that, with the same symptoms as the old men Anna had cared for; somehow he survived. [Jay Robert Nash, Look for the Woman: A Narrative Encyclopedia…, 1981, p. 179] 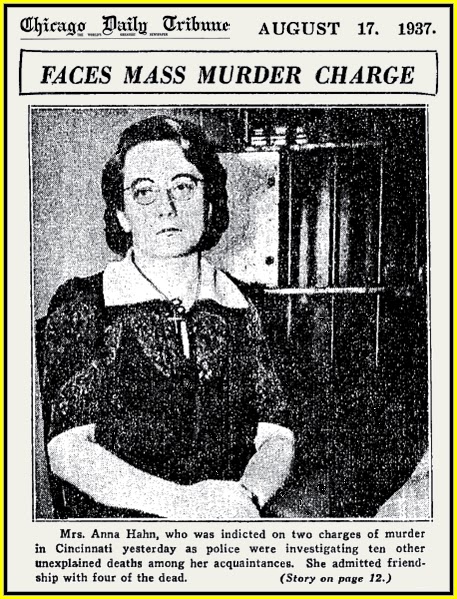 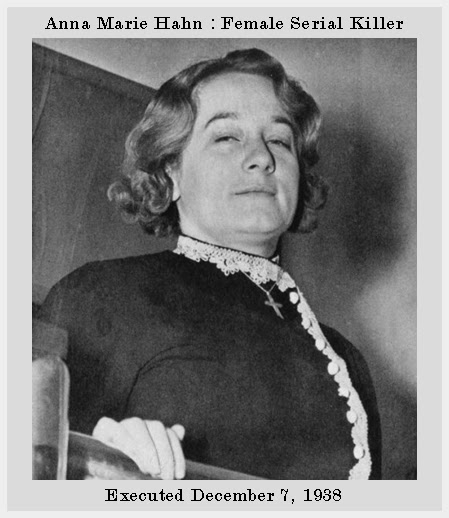 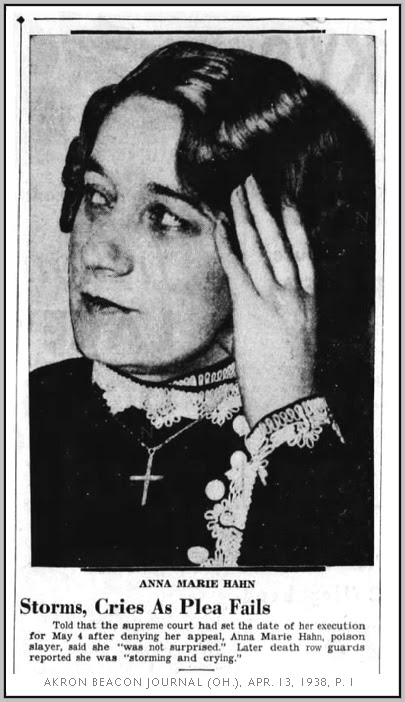 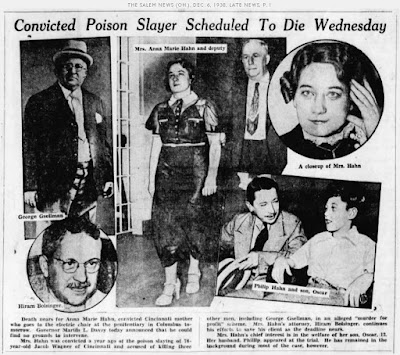 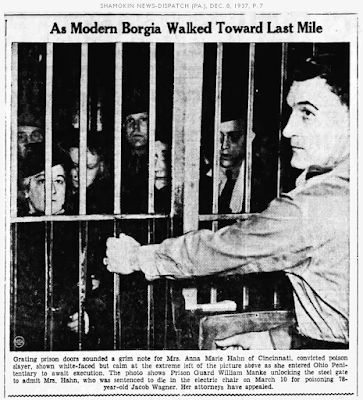 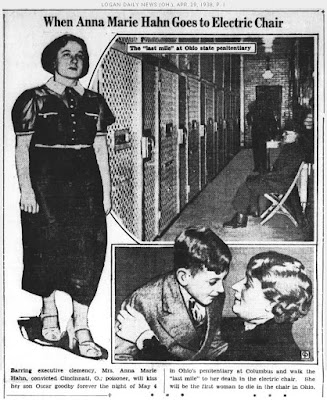 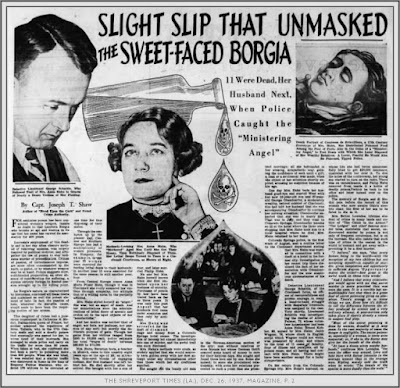 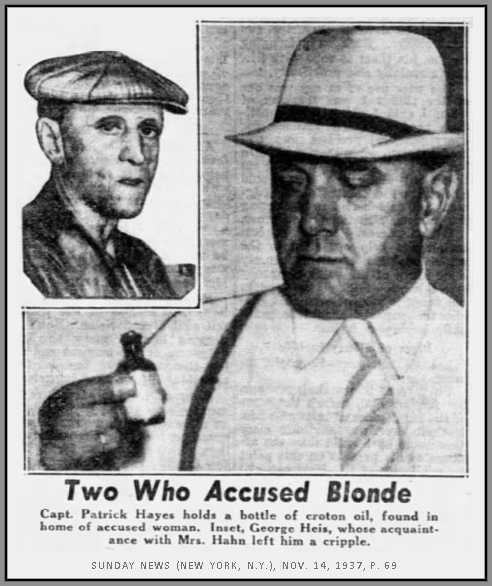 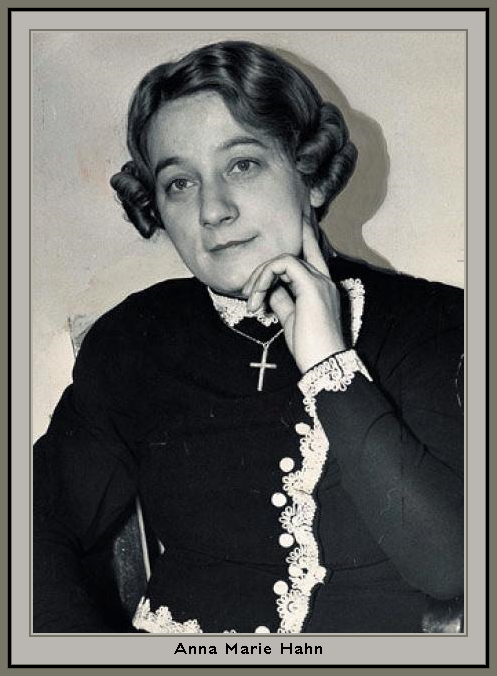