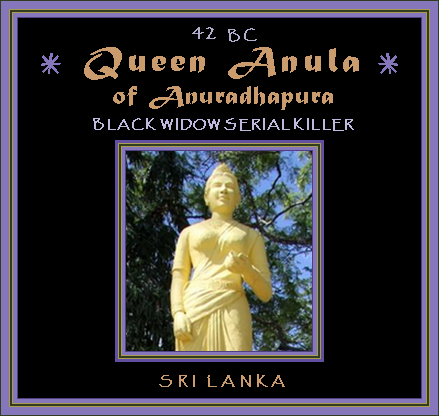 Queen Anula (reigned 47 BC – 42 BC) was the first queen in Sri Lankan history to have wielded meaningful power and authority. As well as that she was the first female head of state in Asia. Anula initially rose to power as consort of king Chore Naga (also known as 'Coranaga' and 'Mahanaga'), son of king Valagambahu of Anuradhapura; however in her five-year reign she poisoned her way through at least four other husbands and consorts and eventually governed Rajarata on her own. [Wikipedia]

She was the chief queen of Chora Naga (63-51 BC) and was known as an evil woman who was sadistic enough to kill almost all her partners. First she poisoned King Chora Naga as she wanted her lover Siva, a doorman, to become the king, yet it was a prince called Tissa who rose to power in the end. Anula kill Tissa and so that Siva might become king and whose queen would be. As Tissa’s queen she took a Tamil paramour named Watuka. Just fourteen months after he took the throne. After the elapse of just a year and two months, King Siva was too poisoned by Queen Anula. Watuka then became king. Anula repeated her formula and after Watuka’s death her paramour Darakatiya was enthroned, assuming the royal name of Tissa. Again Anula moved on. Her new lover, a Brahmin adviser called Neeliya came to replace the poisoned Darakatiya Tissa. After poisoning Neeliya, Queen Anula ruled as sole monarch, but only for a mere four months.

His queen-consort, Anuld by name, slew the king by giving him poison, and caused the country to be ruled by means of Balat Siva for one year and two months.

She then poisoned him and caused the country to be ruled by a Tamil, Vatuka by name, for one year and two months.

She poisoned him also, and caused the country to be ruled by a Purohita Brahmin for six months.

She poisoned him also, and caused the kingdom to be administered by the astrologer Vdsuki for one year and one month.

She poisoned him also, and caused the kingdom to be governed by Bela Tissa for one year and one month. She then poisoned him and reigned four months. 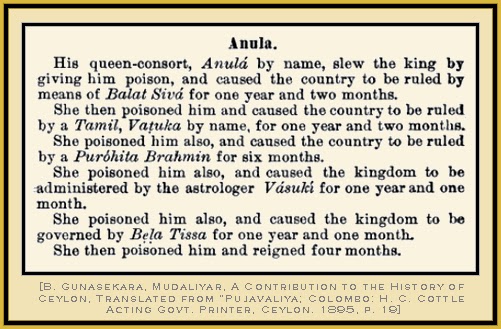 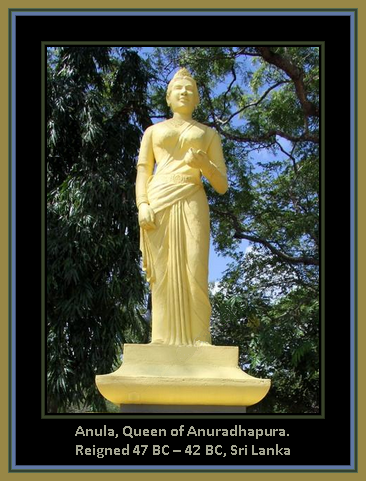 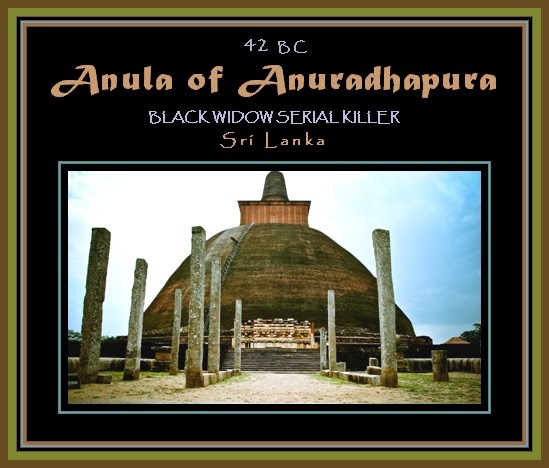