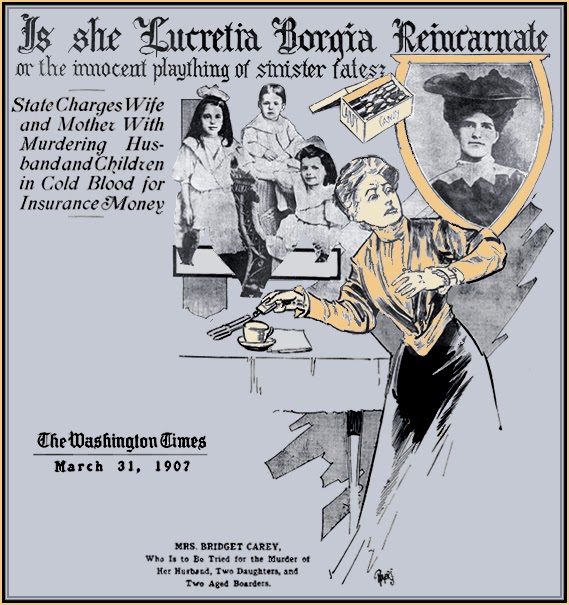 Bridget Carey was acquitted of having committed the murders she had been charged with, yet no plausible alternative explanation was ever offered of how the children and other persons came to ingest arsenic while living with her.

ILLUSTRATION CAPTIONS: The Three Little Children of Mrs. Carey The Two Little Girls Were Poisoned – MRS. BRIDGET CAREY Who Is to Be Tried for the Murder of Her Husband Two Daughters and Two Aged Boarders

FULL TEXT: “Bridget Carey, stand up and face the jury!”

“Why did you cold-bloodedly poison your two little girls?”

“Why did you kill your husband by giving him poisoned tea?”

These are the questions that will be hurled at a frail little woman the widowed wife of a miner who is hardly past her thirtieth year on a certain day in April yet to be named.

She is accused by the great Commonwealth of Pennsylvania and the prosecuting attorney is convinced that the has sufficient proof to convict her of the most atrocious murders in the annals of the State.

~ SAY SHE DID IT FOR INSURANCE MONEY. ~

The State also hopes to prove that it was not hate, revenge, or insanity that prompted her to take the innocent lives but a cold-blooded desire to secure the paltry insurance on the lives of her victims which had been made out her favor. It will also attempt to prove that she stood by while her victims groveled in their death throes and urged them to hurry up and die.

PUBLIC opinion in Pennsylvania is very evenly divided on the subject of her guilt. In Centralia where the husband died, the people were so enraged when the coroner sent detectives to examine the body in the hope of accusing the wife that they drove the sleuths from the town. No examination was made of the remains and none will be permitted. The people of Centralia have gone even further and have made up a purse to employ the boat legal talent to defend their former townswoman.

Since August she has been confined in the Moyamensing prison and now the great battle for her life will be commenced with the State on one and almost the entire population of the large mining town, Centralia, on the other. The question is will a jury of twelve men follow the load of the coroner’s juries or will they condemn her to the hangman’s noose?

The very heinousness of the crimes has militated greatly in her favor in the matter of public opinion. Her friends claim that it would take nothing less than a most depraved fiend, a human jackal, to have committed the crimes that are laid at Mrs. Carey’s door by the State. They say it is impossible that she could have stood weeping at the bedside of her husband pretending the most harrowing grief while waiting for the arsenic administered by her hand to make her a widow and all this for a small sum of insurance money.

It is also claimed by these friends that she was a devoted mother to her two little girls and no insignificant $200 insurance money could have ever tempted her to ruthlessly snuff out their little lives by feeding them candy poisoned with arsenic. They also say that she thought very highly of her two boarders Patrick and Cecelia Cook and that she had nothing to gain by their deaths.

On the other hand, it is claimed the State that the bodies of the little girls showed unmistakable symptoms of arsenic poisoning and that the remains had been mutilated almost beyond recognition in order to destroy all evidence of foul play.

The bodies of the Cooks were months after burial the removed and searching analyses made. These revealed the presence of arsenic.

The husband died a year and a half ago and his death was attributed to acute indigestion, according to the charges of the prosecution Mrs. Carey was paid a small sum of insurance money and then moved to settling in an Irish neighborhood and the Cooks came to board with her. Later they died and again the cause was given as acute indigestion. Again Mrs. Carey was paid the insurance money.

A short time later little Mary Carey became ill. Her face became purple and her stomach swelled. She rolled on her bed groaning and a physician was called. He diagnosed the case as eating too much cheap candy. She died in a few hours. The next evening the second daughter Emma developed the same symptoms and died within a few hours.

When the coroner heard the report that the two children had died from eating too much cheap candy, he sent one of his deputies to make a searching investigation of the candy shops in the neighborhood of the Carey home. Samples of the candy were analyzed and showed that they contained nothing harmful. The shopkeepers swore that the children had secured nothing from them that could not be eaten without danger.

Then the coroner heard of the deaths of the Cooks and the husband and the manner in which they died. They had not died from eating candy, but all had died from arsenic poisoning. The officials at once suspected Mrs. Carey and her arrest followed. She has stoutly claimed her innocence from the first.

“I didn’t do it! I didn’t do it! Oh, how could they accuse me of it! And my own children!” she kept reiterating during her arrest and preliminary hearings.

She sobbed throughout the examination and when she raised her veil at the conclusion of the hearing her were red with weeping, her lips quivered, and she appeared thoroughly grief stricken.

In appearance she is almost the last person in the world one would take for a murderess, a modern Lucretia Borgia. She is a small, frail woman and her hands are marked with the toil of her short life. Her face is practically free from lines, her jet black hair has no silver strands and her dark eyes are continually downcast and her entire demeanor is decidedly demure.

During the three or four hearings that she has had to sit through, she baa been almost a statue in black Her dress hat and heavy veil are the black of the deepest mourning. She sat with her hands folded in her lap, but for the slight convulsive sobs that shook her frame, she well have a graven image.

[“Is She Lucretia Borgia Incarnate? Or the Innocent Plaything of Sinister Fate? - “State Charges Wife and Mother With Murdering Husband and Children in Cold Blood for Insurance Money,” The Washington Times (D.C.), Mar. 31, 1907]

FULL TEXT (Article 2 of 2): Mrs. Bridget Carey, who was recently acquitted in Philadelphia of the charge of murdering her two children, was on Monday formally freed from the additional charges of having killed Patrick and Cecelia Cook, and released in time to eat her Christmas dinner with her cousin, Mrs. Bridget McDonald.

On behalf of the Commonwealth Assistant District Attorney Gray admitted that the evidence in the Cook cases was not so strong as in the case of the children, and that it was useless to go before a jury.

Sympathetic neighbors and relatives were on hand to greet the woman as soon as she was discharged, and all expressed confidence in her innocence.

The final scene of her protracted ordeal took only a few moments. Immediately after the Court opened, Assistant District Attorney Gray, without preliminary formality, made this brief statement to Judge Carr :

“If your Honor pleases, I have a motion to make with regard to the case of Mrs. Bridget Carey, who was recently acquitted of the murder of her two children. We have two remaining bills of indictment, one charging her with the murder of Patrick Cook, the other with the murder of Cecelia Cook. We have thoroughly and carefully investigated each of these cases, and find that there is not as much evidence as there was in the case of the children. There is not sufficient evidence to go before a jury. We desire, therefore, to submit the bills for verdicts of not guilty.”

As the defense had no objections to this procedure, the two bills were at once submitted, and verdicts of not guilty taken. Then followed the demonstration of sympathy. Mrs. Carey stopped from the prisoner’s dock, a free woman, and, laying her head on the shoulder of Mrs. McDonald, burst into tears.

A brief talk with her attorney, Edwin M. Abbott, followed, while, the Court clerk made out her formal discharge. Mrs. Carey was then surrounded by twenty or more admiring friends and neighbors, grasping her hand and expressing joy at her release. One aged woman, who lived near her, grabbed her about the neck and kissed her repeatedly. Then the crowd literally swept her toward the door and into the corridor, where she was deluged with congratulatory words.

As she went away with her cousin, Mrs. McDonald, Mrs. Carey expressed her satisfaction and thanks to the District Attorney for releasing her in time to eat her Christmas dinner in freedom. “I have no hard feelings,” she added, “against those who have prosecuted me. I suppose they thought they were doing right. But even the witnesses against me must have known I was innocent. I expect to live with my cousin, Mrs. McDonald, for the present.”

She made a more complete statement of her plans to Mrs. Anna Melloy, next door to Mrs. Carey’s old home. Mrs. Melloy was in the Court room and accompanied her part way to her new home. “Mrs. Carey told me she would not return to Hamilton street,” said Mrs. Melloy later, “but would probably go up the State to her old home at Centralia, Columbia county, after a few days. She said the attend ants at the prison had been very kind, helped her to get sewing work and showed her consideration in every way. She seemed stouter and in better health than formerly. The sympathy of all her neighbors was with Mrs. Carey, and, knowing her for years, we could not believe that she would deliberately kill her little children.”

Mrs. Rebecca Welsh, who now conducts a boarding house where Mrs. Carey lived at the time her two children died, was another neighbor who went down to the Court room to bid Mrs. Carey Godspeed.

She confirmed the statement that Mrs. Carey would not return to Hamilton street, and also that her neighbors generally believed her innocent. She was only sorry that she had not been called to testify for Mrs. Carey at the trial. 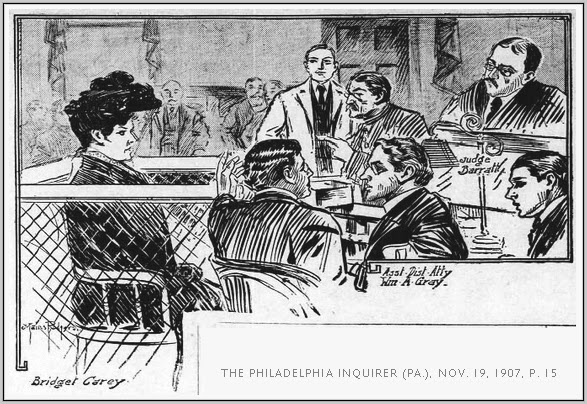 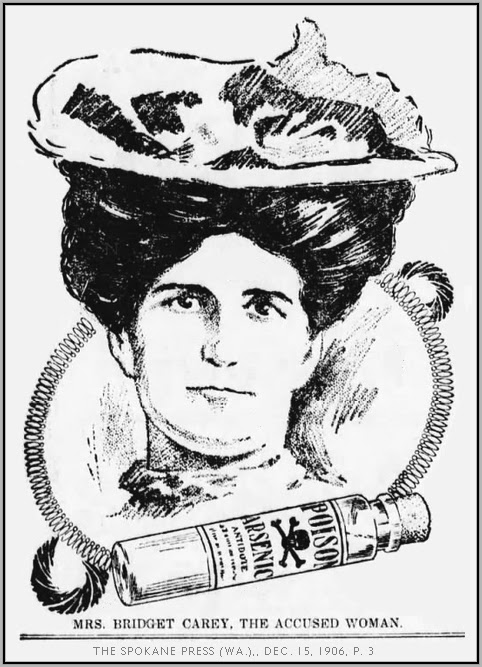 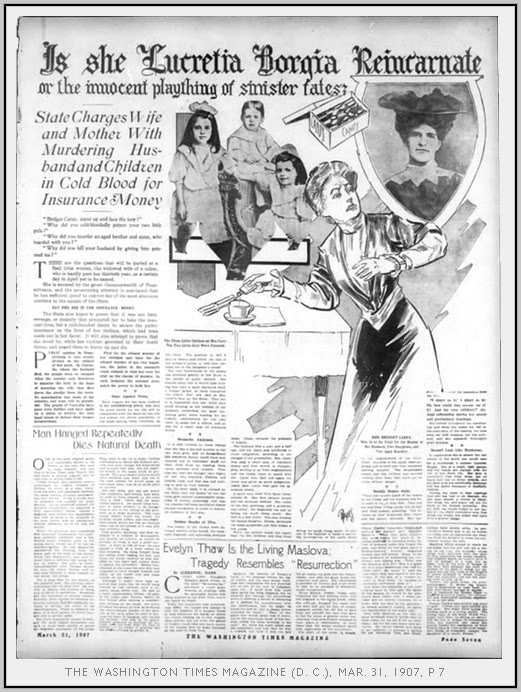 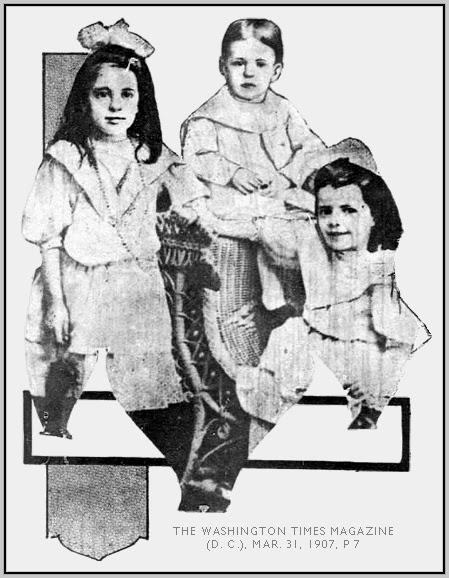 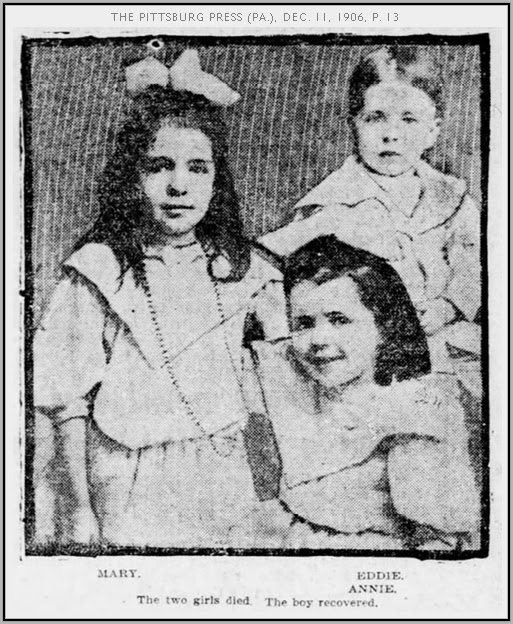 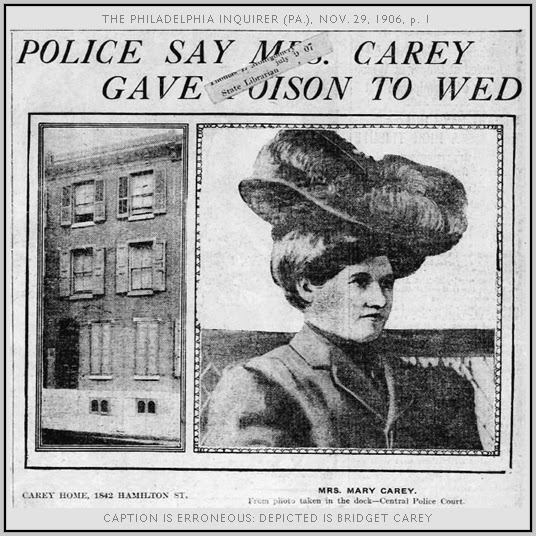 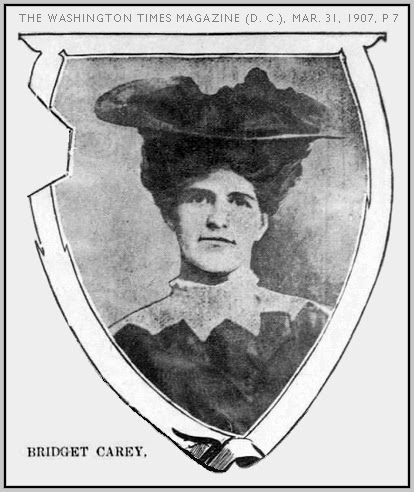 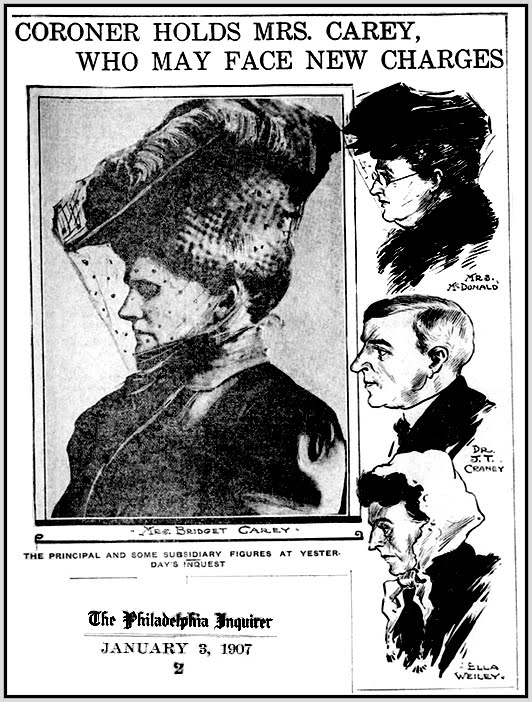 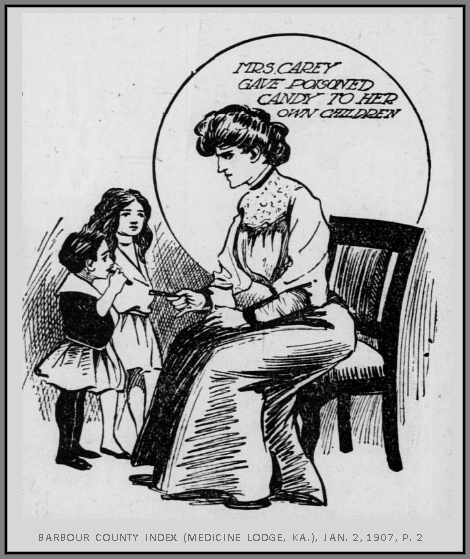