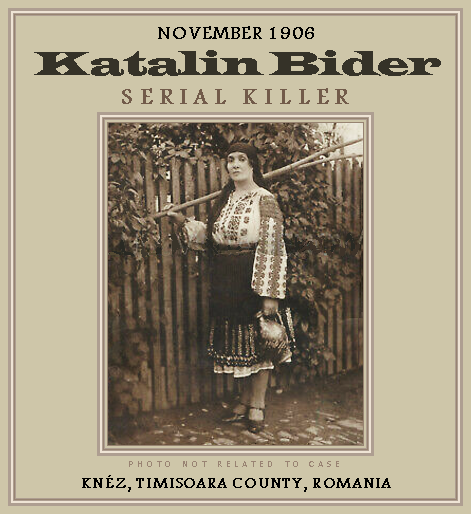 Katalin Bider is the name given in a Hungarian newspaper. An English language source gives "Catharine Biber."

FULL TEXT: Vienna, Nov. 23. – Five men and two women were recently arrested at Knez, in the Temesvar district of Hungary, for having poisoned their wives and husbands.

Martha Petromany, a woman who is known as the “poison mixer,” was also placed in custody for having sold them arsenic to commit the murders.

A judge who has been investigating the cases now reports that there has seen wholesale poisoning in the district, and further arrests have been made. Catherine Biber is accused of poisoning her son-in-law, because he was a drunkard, and also her parents, in order to obtain the family estate.

The poison in all cases is to have been provided by Martha Petromany, who is alleged to have charged $4.50 in each case. The attention of the police was directed to the murder epidemic by an anonymous letter.

FULL TEXT (Translated from Hungarian) — They tell us about Timisoara: The court of Timisoara is investigating a sensational case similar to the crime party of poison-mixing women in Zsebely and Hódmezővásárhely.

Two years ago, based on an anonymous report, an investigation was launched in Knéz, Timisoara County, due to poison mixing. Thirteen corpses were exhumed and arsenic was found inside each.

The poisoning was undoubtedly established by the Forensic Medical Council and National Chemist Emil Felletár.

So far, nine people have been arrested and escorted to the Timisoara prison. 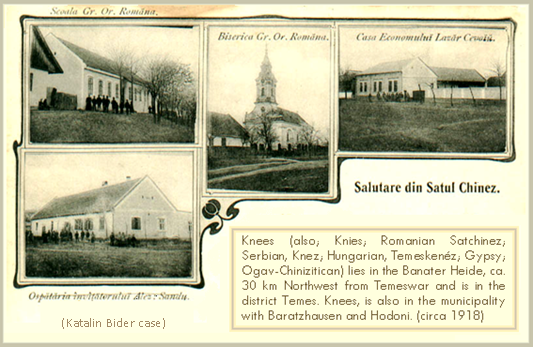 Knees / Satchinez was registered between 1332-1337 and allegedly based by a certain Paul Chinezu. In the 18th, century, the village had been populated by Serbs. Population during the 1997 census was 4626 inhabitants. Registered were 2246 men and 2380 women. The number of households was 1331.

Location: Knees (also; Knies; Romanian Satchinez; Serbian, Knez; Hungarian, Temeskenéz; Gypsy; Ogav-Chinizitican) lies in the Banater Heide, ca. 30 km Northwest from Temeswar and is in the district Temes. Knees, is also in the municipality with Baratzhausen and Hodoni.

Coordinates: the village lies on the coordinates - 21° 02' 23" and 45° 56' 36".  According to the ocean view, the high point of the village is at the Catholic Church, 102 meters and reaches the highest point in the direction of Baratzhausen with 106 meter. The lowest point is at 98, meters, in the Billed direction.

Climate: As the rest of Europe, Knees, have cold winters and hot summers. Springtime is mostly short. The average temperature throughout the year is about 10-6C. With the rich soil and relatively low water surface, brings a high harvest.

Neighbor Villages: Knees lies southwest from the village of Billed. Westerly from Alexanderhausen.  Northeast to Baratzhausen. East to Kalatscha and Southeast to Hodoni. 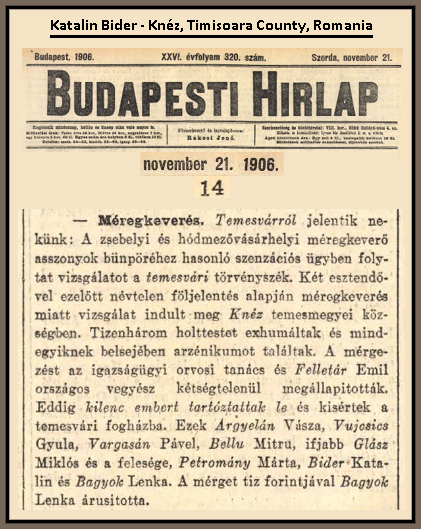 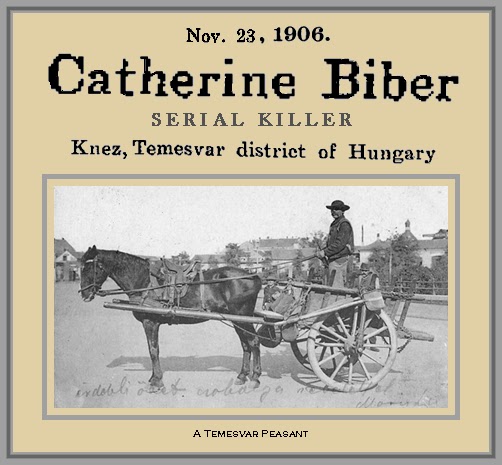