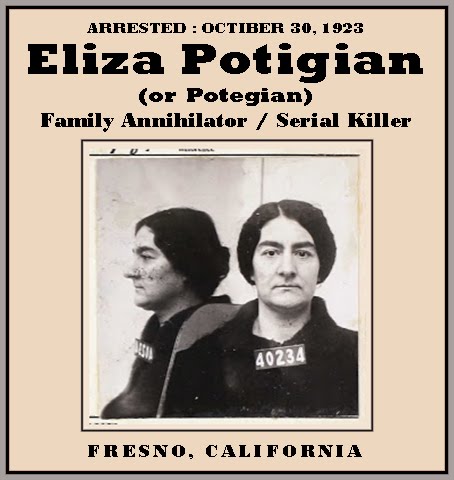 ► Eliza Potigian is the spelling given in the San Quentin Prison records (misspellings and variants in news reports: Potegian, Patagian, Potigan, Potigaion)

► Maria Torosian, Eliza Potegian’s mother, widow of six husbands, each of whom died under mysterious circumstances 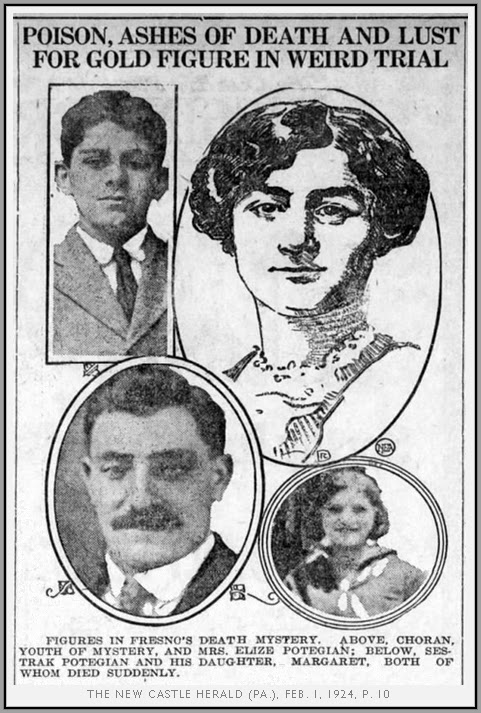 FULL TEXT (Article 1 of 6): (note: the various spellings of the name appear in the original.) Fresno, Nov. 1. – Charged with first degree murder, Mrs. Eliza Potigan [sic], 33, who lives on a ranch near Fresno is in the county jail here today, suspected of having poisoned her 17-year-old stepdaughter, Margaret Potigaion [sic], who died two nights ago at a hospital here.

According to Sheriff W. F. Jones she confessed last night that she had administered poison both to the girl and to Margaret's brother, Goorken, 21 years old. The latter did not suffer serious effects.

Officers, believe Mrs. Potigan also caused the death of her husband, Setrak Potigian, 45, by poison last June and today they are directing their investigation to clearing up the circumstances of his last illness. It was similar to that of Margaret Potigan, to whom it is thought a subtle poison was administered in small doses over a period of weeks.

Efforts are also being made to ascertain if Mrs. Potigan had any connection with the death of a baby that was beaten on the head and thrown into the San Joaquin river more than a year ago.

The Potigian children were joint heirs to the estate of their father that includes at $125,000 ranch. The wife has only a life interest in the property. Her motive of poisoning the brother and sister is believed to have been a desire to obtain all the property for herself.

According to her confession, made to District Attorney George R. Lovejoy, Sheriff Jones and other officials last night, she placed arsenic about eight weeks ago in food that she gave to the Potigian children and that she ate herself, with the intention of ending all their lives. The act was committed, she said, after forty days of prayer for the death of her stepchildren, following her husband’s demise. But, after they had all eaten the poisoned food, she related, she relented and administered an antidote, that the boy and herself took in large quantities, but which the girl only drank of sparingly.

Dr. C. F. Dickinson of this city was called and told that the girl had ptomaine poisoning. During the weeks she was ill he became suspicious. It iis believed that the poison was not administered at once, as Mrs. Potegian says, but in small quantities.

When she died Tuesday night Dr. Dickenson refused to sign a death certificate. Other physicians called in consultation before her death agreed that the girl seemed to have been poisoned and nothing could be done to save her. 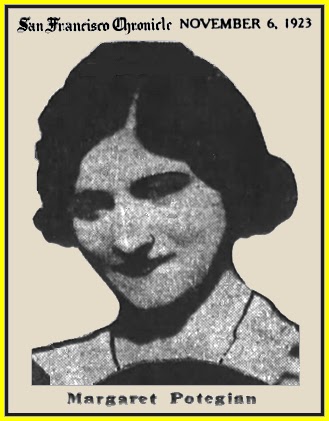 FULL TEXT (Article 2 of 6): Fresno, Cal., Nov. 8.—A close guard is being maintained today over Mrs. Eliza Patigian [error, “Potegian” in most sources], charged with poisoning her step-daughter, following an attempt to commit suicide by strangulation in the county jail here yesterday afternoon. The attempt by Mrs. Patigian to end her life followed receipt of word that her mother, Mrs. Maria Torosian had committed suicide by hanging at the Torosian ranch home west of Fresno.

An alleged attempt of Mrs. Patigian to secure her freedom by bribing officers, was revealed last night by Deputy Sheriff Ed Melchonian. The officer claims that the suspect offered him all her jewels as well as some $2500 which she is to derive annually from her husband’s estate, for her freedom.

It was declared by officers today that she planned a wholesale bribery to gain her freedom. Mrs. Patigian declared she desired but $500 which she would use in making her escape from this country, the officers said.

~ Her Mother Had Six Husbands ~

Officers investigating the suicide by hanging yesterday of Mrs. Torosian, mother of Mrs. Patigian, said who feared arrest in the poison ruse.

The authorities said Mrs. Torosian was the widow of six husbands, each of whom died under mysterious circumstances. 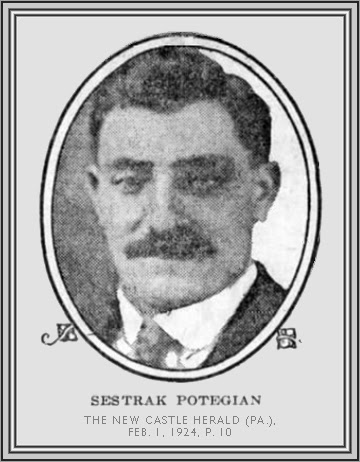 FULL TEXT (Article 3 of 6): Fresno, Calif., Feb. 4. — A woman kneeling on a mound of ashes, symbolic of death, and chanting incessantly the death prayer of Armenian superstition, beseeching for 40 days and 40 nights that death take her stepchildren –

This is the picture given to a jury here February 4, in the trial of Mrs. Elize Potegian, accused of murder.

The story of Mrs. Potegian is a story of mystery. Mystery surrounds her identity. Mystery has left the deaths of her husband, two stepchildren and her mother unsolved. The jury trying her will be told that she fled massacres in Armenia and came to America, bringing Choran, a boy whom she says is not her son.

In California she met Sestrak Potegian, widower with three children, owner of vineyards valued at $125,000. She married him for his money, charges the prosecutor.

In June, 1923, her husband died after a brief illness. He willed the bulk of his estate to his two children, Margaret, 18, and Gordon, 21.

Then, the state contends, Mrs. Potegian called upon the power of Armenian mysticism to destroy the stepchildren. She built an altar on ashes and gave herself to prayer for 40 days and nights.

But the children lived on.

Failing by this means, it is charged, she resorted to more certain means to accomplish her end. 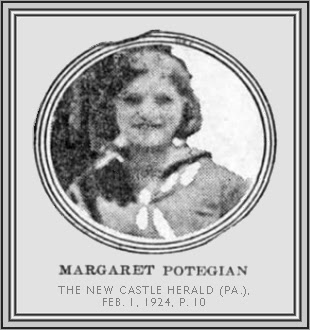 Late in October, 1928, Margaret died after a brief illness. At this time Gordon, too, was mysteriously stricken but he recovered. Autopsy of Margaret’s body disclosed arsenic poison in her stomach.

Mrs. Potegian under arrest, accused her mother, Mrs. A. Torosian. When the police went to arrest the woman they found her body dangling from a rafter in her home. She had hanged herself. On the same day Mrs. Potegian tried to kill herself in her jail cell, slashing her wrists.

Despite this evidence, Mrs. Potegian pleaded “not guilty.”

Interest in the case, in which Gorden, the surviving son, will be the principal prosecution witness, is widespread throughout California. Mrs. Potegian has engaged able counsel and a bitter legal battle is expected. 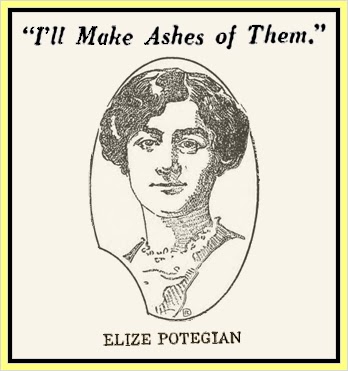 FULL TEXT (Article 4 of 6): Fresno, Feb. 23. – The third week of the trial of Mrs. Eliza Potegian, charged with the murder attempts by the prosecution to fasten onto the defendant threats against her husband and his family and statements with presaged their eventual doom.

It was a background of bitter enmity and hatred with definite touches of oriental fatalism and mysticism, which neighbors and friends of the family painted as the strained atmosphere in which the Potegians lived for months.

These witnesses, all women, testified in different conversations which depicted the supposed hatred of Mrs. Potegian of her husband and his children and her eventual hope to control the estate herself.

Nectar Balassanian told of a conversation in which Mrs. Potegian said that while she could not get along with her husband she would not seek a divorce but instead would “pray for the family to dry up.”

Ousian Darbazanjian said Mrs. Potegian had reviled the family and told her she was going to “make ashes out of them.” 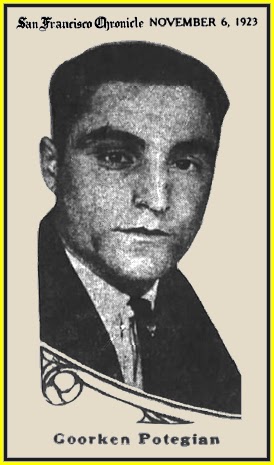 Martha Garabedian, a guest at the wedding of the Potegians and frequently their house guest, said Mrs. Potegian reviled George and Margaret Potegian, calling them dogs and using other such epithets, and said she would never accept them.

Mrs. Potegian, for the first time since her trial began, showed live interest in the proceedings, closely followed the testimony and frequently coaching her son, who sat next to her, on questions to suggest to her attorney.

FULL TEXT (Article 5 of 6): Fresno, Cal., March 1.—Mrs. Eliza [sic] Potegian, charged with the murder of her stepdaughter, Margaret by administering a poison, was found guilty of murder in the first degree by a jury after an hour's deliberation today. Life in prison was recommended. 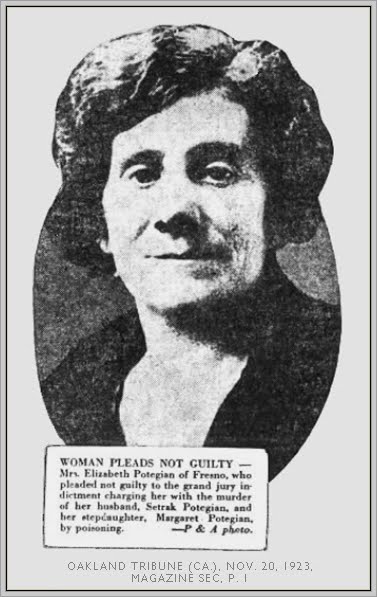 EXCERPT (Article 6 of 6): For the third time Eliza Potegian, convicted central figure in Fresno poison murder case in 1923, is seeking a parole from state prison, where she is serving a life sentence for the murder of her 17 year-old stepdaughter, Margaret.

Mrs. Potegian, now 41, is one of  twenty-two women inmates, including six slayers, who have applied to the state hoard of prison terms and paroles for freedom from the prison at Tehachapi. She filed similar appeals in 1931 and in 1935 while in San Quentin.

Her sentence resulted from conviction on a charge of putting poison in an okra stew she served to the girl. The county grand jury had indicted her both for the murder of the girl and for the murder of her husband. Setrak Potegian whose exhumed body revealed a large amount of the same poison.

A stepson, George Potegian, who also became ill after eating the stew, testified against Mrs. Potegian at the trial. Mrs. Potegian’s mother, Mrs. M. Torosian, hanged herself at her home near Fresno shortly before officers arrived to investigate a report the two women conspired to kill the other members of the family. [The rest of the article refers to other cases exclusively.] 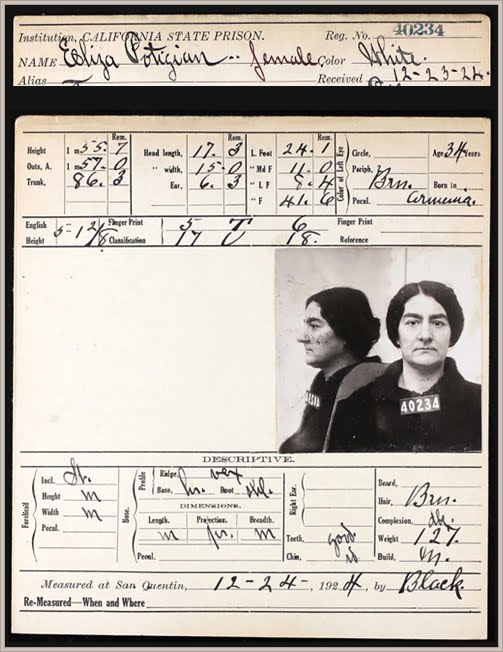 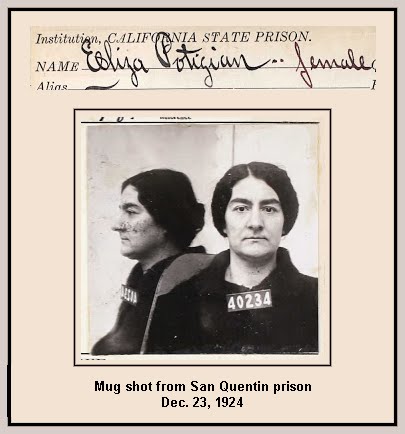 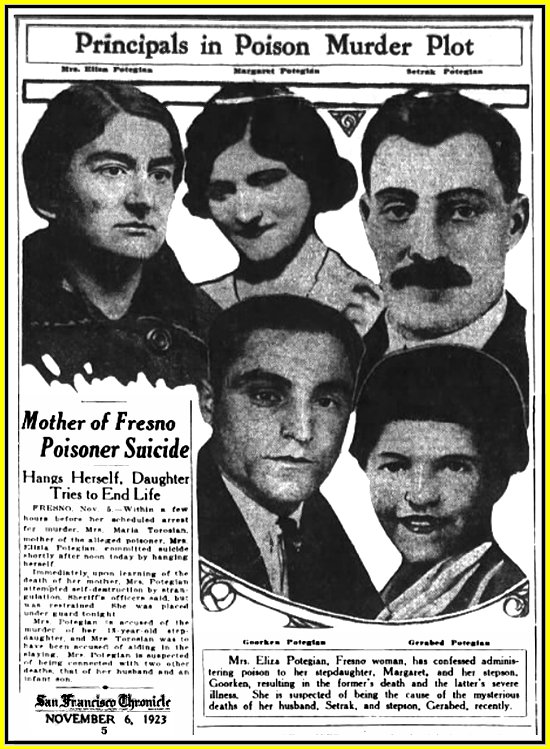 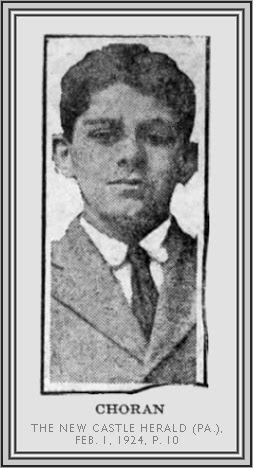 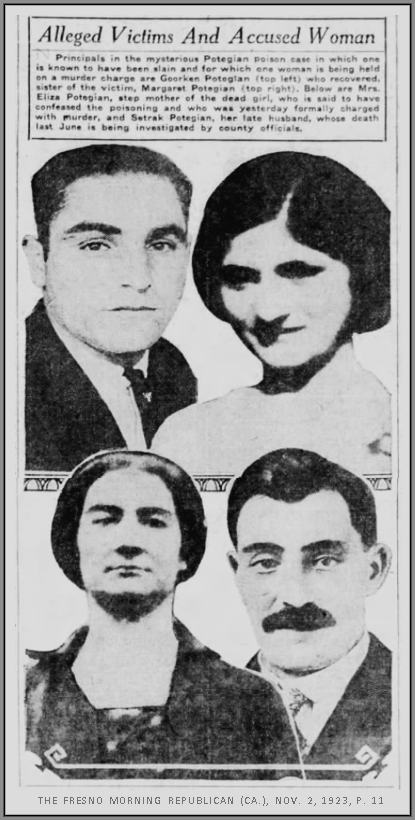 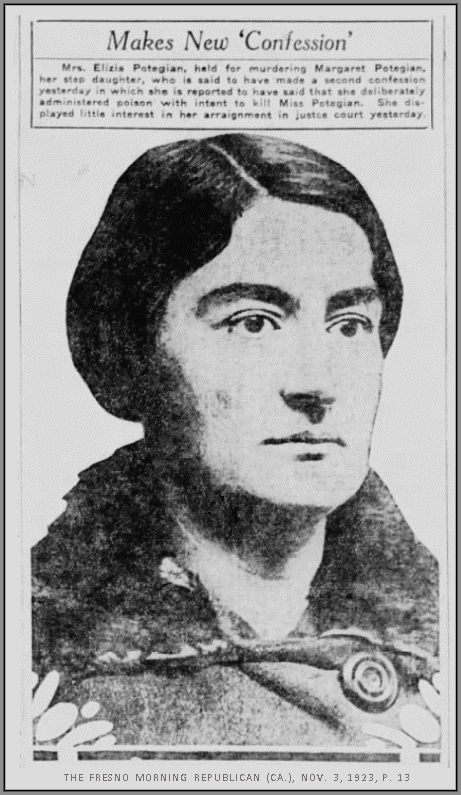 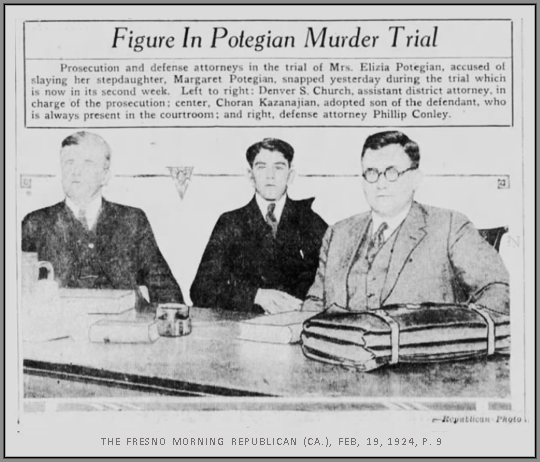 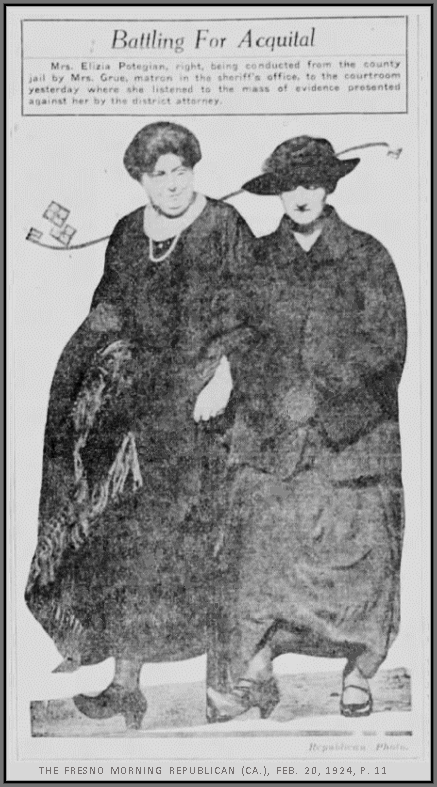 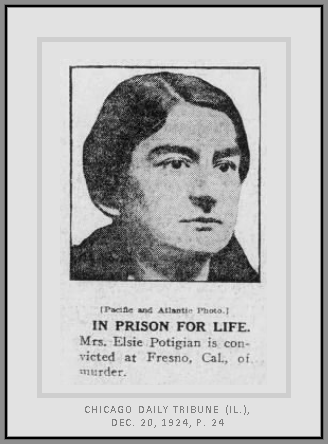 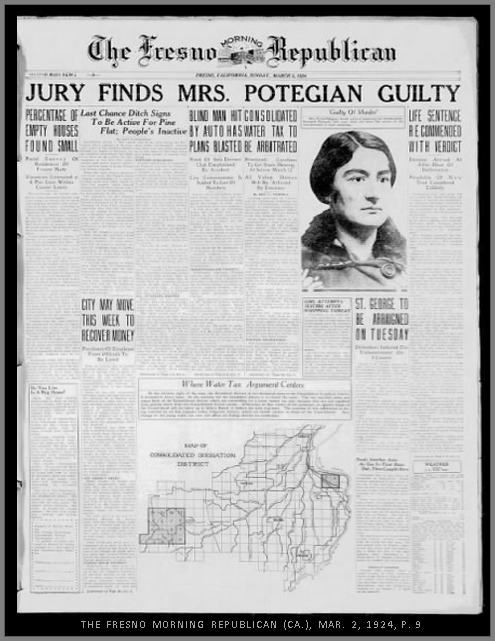 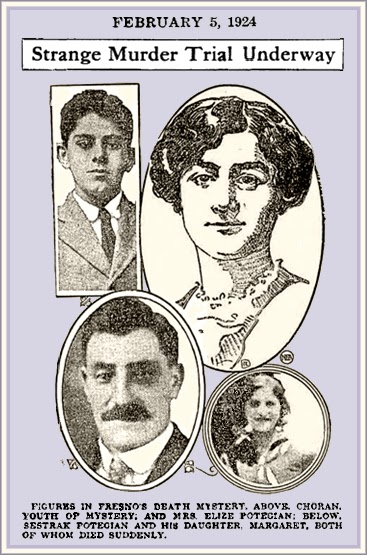 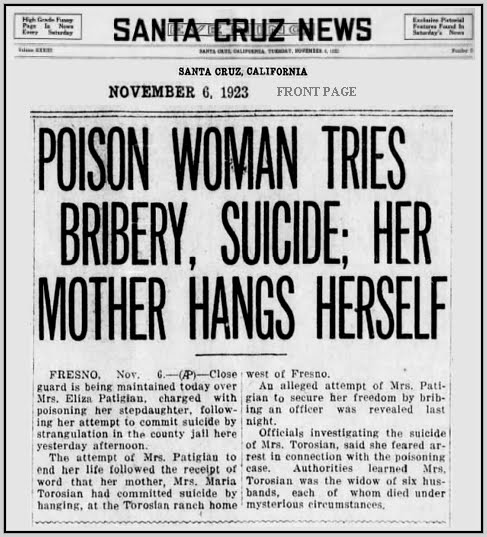 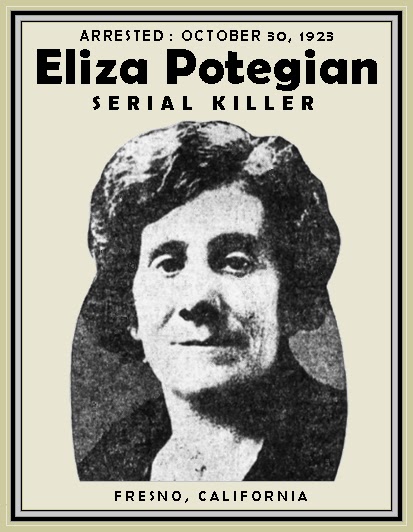 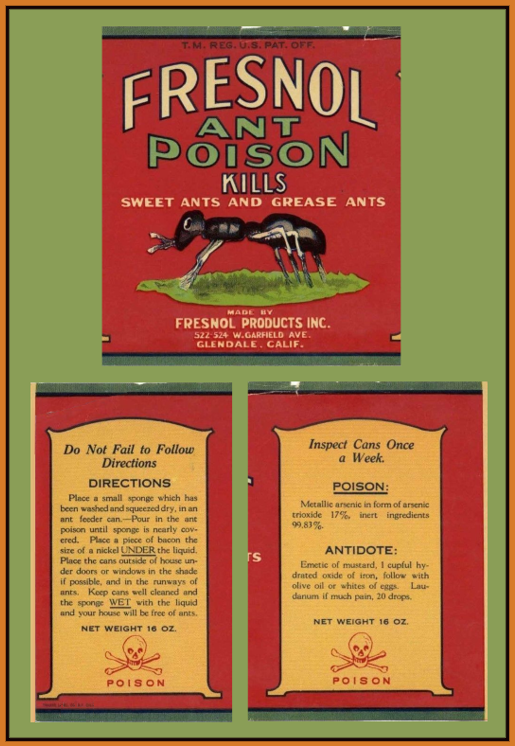 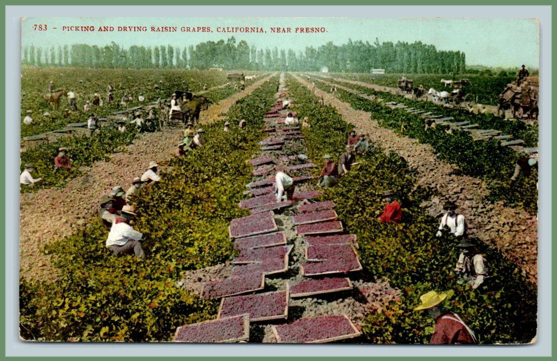