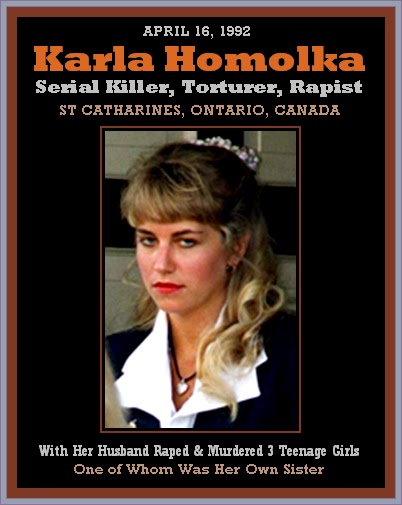 The following Wikipedia entry only scratches the surface of the dual horrors of this case: the incredible sadism of Homolka, and the extremity of the application in the case of both feminist victimhood mythology and male chivalry which allowed the serial murder investigation and prosecution to march forward with blindness towards female-perpetrated ultra-violence. To get an accurate picture of the Homolka travesty read the absolutely indispensable 1997 book, When She Was Bad: Violent Women and the Myth of Innocence, by Patricia Pearson.

WIKIPEDIA  excerpt: Karla Leanne Homolka, also known as Karla Leanne Teale (born 4 May 1970 in Port Credit, Ontario, Canada), is a Canadian serial killer. She attracted worldwide media attention when she was convicted of manslaughter following a plea bargain in the 1991 and 1992 rape-murders of two Ontario teenage girls, Leslie Mahaffy and Kristen French, as well as the rape and death of her own sister Tammy.

Homolka and Paul Bernardo, her husband and partner-in-crime, were arrested in 1993. In 1995, Bernardo was convicted of the two teenagers' murders and received life in prison, the full maximum sentence allowed in Canada. During the 1993 investigation, Homolka stated to investigators that Bernardo abused her, and that she was unwilling accomplice to the murders. As a result, she struck a deal with prosecutors for a reduced prison sentence of 12 years in exchange for a guilty plea for manslaughter. However, videotapes of the crimes later surfaced and demonstrated that she was a more active participant than she had claimed. As a result, the deal that she struck with prosecutors was dubbed in the Canadian press as the “Deal with the Devil.”

Public outrage about Homolka's plea deal continued until her high-profile release from prison in 2005. Following her release from prison, she settled in the province of Quebec, where she married and gave birth to a boy. In 2007, the Canadian press received reports that she had left Canada for the Antilles with her husband, their baby and has changed her name to Leanne Teale.