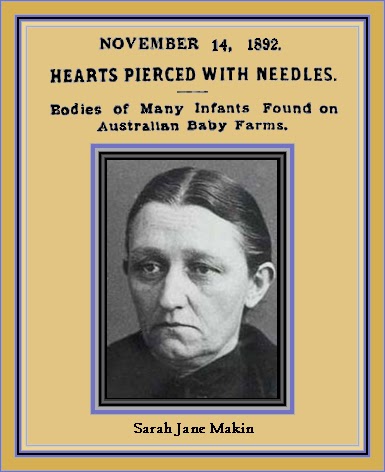 FULL TEXT (Article 1 of 3): Sydney  N. S. W. – The police are searching all the premises occupied by the Makin family of baby farmers now under arrest. At MacDonald and Redfern, two suburbs of Sydney, the bodies of thirteen infants were found and to-day, two more bodies were found in the yard of a house at Chippendale.

The mothers of some of the murdered babies have been traced. The theory of the doctors is that the babies were killed by having their hearts or spines pierced with needles.

[Note: A typo (“Makini”) in the original has been corrected. The farm was operated by Mr. William Samuel Makin & Mrs. Sarah Jane Makin (AKA Mother Makin Sutcliffe)]

EXCERPT (Article 2 of 3): John Makin (14 February 1845 – 15 August 1893) and Sarah Jane Makin (20 December 1845 – 13 September 1918) were Australian baby farmers who were convicted in New South Wales of the murder of infant Horace Murray. Both were tried and found guilty in March 1893 and sentenced to death. John was hanged on 15 August 1893, but Sarah's sentence was commuted to life imprisonment. On 29 April 1911, she was paroled from State Reformatory for Women at Long Bay in response to the petition of her daughters. 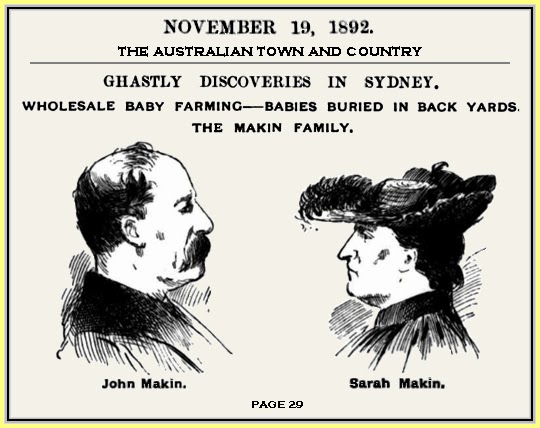 FULL TEXT (Article 3 of 3): In our issue of last week the announcement was made that the Sydney police had unearthed the bodies of seven infants from the back yard of a house situated in Burron-street, Macdonaldtown, and that on the following day the bodies of four more infants were found buried in the yard of a house in George street, Redfern. It was also stated that the Makin family, who were known to have tenanted those houses some months ago, had been arrested on suspicion of having caused the deaths of the infants. The police continued their searches, and Senior-constable Joyce, who has charge of the case, made inquiries concerning other houses in which the Makins resided recently. It was ascertained that the family m question dwelt in another place in Redfern, and, consequently, on the morning of November 11 a couple of policeman proceeded to No. 11 Alderson-street. With the aid of picks and spades they began to dig up the backyard, and in a very short time the remains of two more infants were unearthed, thus bringing the grand total to 13. The first body that was discovered consisted simply of small human bones, and then the second – a decomposed body wrapped in some cloth, similar to those already found, was discovered. The remains were removed to the South Sydney Morgue. The police continued digging at the house in Alderson-street, which was occupied by the Makin family nearly 12 months ago, but no more bodies were brought to light.

Additional horror was given to the large number of hastly discoveries on the afternoon of November 12. The Makins had been traced to a house in Chippendale, and on the evening named, despite the very wet weather, Senior-constable Joyce and his assistant, Constable Brown, commenced digging in the yard of 28 Levey-street, Chippendale, which runs off Abercrombie-street. A great crowd of people watched the police at work, and about 6 o’clock Joyce unearthed the remains of an infant. All the flesh had disappeared, and although only the bones remained, they were clearly recognisable as human. The bones were all detached, but the hair still adhered to the skull. The digging was resumed, and about a foot from where these bones were found, another parcel of bones was discovered. They resembled the previous bones, and had been buried about two feet under the surface for almost 12 months. The skeletons were placed in a box and removed to the South Sydney Morgue shortly after 6 o’clock. The remainder of the yard was trenched, but no further discoveries were made. On the following evening Dr. Milford examined the bones in the morgue and found that each body had been wrapped in some blanket and cloth, which fell to pieces when handled. The doctor was of opinion that the bodies had been buried from 9 to 14 months, but the sex could not be discovered. One infant was about the age of 6 months, and the other 2 months at the time of death. As in all cases the doctor was unable to trace the cause of death, which is the most important link missing to the chain of evidence.

The Makins lived in Levey-Street, Redfern, for some weeks about 12 months ago, and during their residence there the neighbors assert that a most offensive odor seemed to emanate from the yard. The neighbors wet e also confident that if the flooring boards were removed more bodies would be found.

It has also been asserted by some persons who lived close by that the day after the Makins moved out of the house some children gained entrance to the empty building. They wandered through the rooms, and in an upstairs bedroom a  little parcel was found. This a child took home to her mother, who found the parcel was wrapped in some blood-stained calico, and contained five long rusty needles. No importance was attached to the discovery, and the needles were laid aside and lost. They were of no use, being too long and  fine for any sewing purpose. Senior-constable Joyce has only been able to gather from the mother that such was the case. This will probably convince those persons who have advanced the theory that the infants have been murdered  by forcing the pins through their hearts. 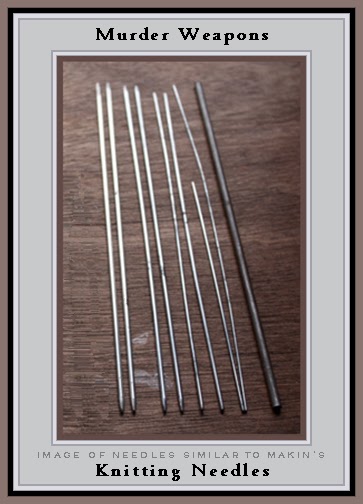 The police have discovered that the Makins at one time resided in Howard-street, as well as in Cook’s River-road, St. Peters, and Harbor-street. It is intended to investigate the yards at all these houses. On the afternoon of November 12 Senior-constable Joyce raised some of the flooring boards in the kitchen at the house in Levey-street, but found that the odor  complained of by the people who had lived there arose from dead rats and bones and rubbish which had been taken there by rats. No trace of any infant’s remains could be seen. With regard to the reported discovery of the five long blood-stained needles, Senior-constable Joyce inquired into the matter, but failed to elicit any thing beyond rumors, and is inclined to think that the reported discovery was the outcome of some exaggerated assertion. It is over 12 months ago some the needles are said to have been found. Joyce has gathered that as far back as three years ago the Makins were carrying on the baby farming work. About this time a baby was taken in by Mrs. Makin to care, and a few days later the mother deserted and failed to pay the weekly maintenance. However, Mrs. Makin had the mother brought back and returned the child to her. The yard of No. 2 Kettle-street, Redfern, was also dug up, but no more bodies were found. The Makin family were traced to a house in Bay street. Glebe, where it is believed they lived about 18 months ago. A neighbor asserted that during their stay in the house they had several infants in their care, which were heard to be continually crying. Shortly after the Makins moved into the house an unpleasant smell was detected from the yard, but no notice was taken of it, and after they moved out of the house the odor was particularly noticeable. It is stated that Makin was one day asked shortly after he moved into the house whether he noticed the strange smell. “Oh, yes,” said Makin, “I buried a little dog there the other day and I expect the fowls have been scraping up the dirt.” It is probable that the police will investigate this yard, but should their efforts be rewarded, nothing but bones could be expected to be found.

Since the discoveries were made known mothers of children have been communicating with the police and assert that children have been placed in the care of Mrs. Makin, and in each case the child is reported to have died within a month of being handed to the Makins. Consequently, the police are confident that the Makins have been carrying on their work for at least two years past, and expect to discover numerous other bodies to tally with the number asserted to have been placed in their care.

Three constables on Monday morning commenced digging up the yard in Bullanatning-street, two doors from Redfern-street. The whole of the ground in the yard was upturned, but no traces of any infants were found. The Makins only occupied the house a very short time. The constables then proceeded to No. 6 Well-street, the house in which the Makins lived when the first bodies were found in Burren-street. Although this yard was thoroughly trenched and a stringent search was made the constables failed to make any additional discoveries. It was in this yard that the police believe the body found in Zamia-street, Redfem, about weeks ago had been buried, as some of the clothing in which the body had been wrapped has been identified by a young lady as belonging to a child she had placed in the care of Mrs. Makin.

An inquest was begun last week at the Sydney Coroner’s Court on the bodies of the infants dis covered at Macdonaldtown. John Makin, Sarah Makin, portraits of whom are given in this issue, and the members of their family, consisting of three girls and a boy, w«re before the court. The dead infants were taken separately. A great deal of evidence was given, but the jury in the cases ot the first four infants returned an open verdict in each case, as there was not sufficient evidence to show how they came by their deaths.

During the continuation, on Wednesday, of the inquest on the remains of the infants found at Macdonaldtown, Clarence Makin, a domestic servant, and daughter of John and Sarah Makin, testified to her mother having three infants in her possession while she was residing in Barren street. She also swore to having seen certain a tides of clothing, which were found wrapped round the dead babies in her mother’s possession while she lived in George-street, Redfern. Before Clarence Makin’s examination had concluded the court adjourned for lunch, and during the interval Mrs. Makin advanced to where her daughter was sitting and cursed her, saving at the Barm timi “ You’ve been swearing all lies.” The examination wan continued and concluded in the after noon. The youngest daughter, Daisy Makin, was then brought into court, and a very painful scene was witnessed. She bean sobbing on seeing her mother, who became hysterical, and madly endeavored to rush across the court to her child. Mrs. Makin then fainted, and was carried out of the court, while the other members of the family were sobbing bitterly. The child about to be examined was unnerved, and her examination was postponed. The scene was a very painful one and many of those in court, including the jurors were moved to tears. 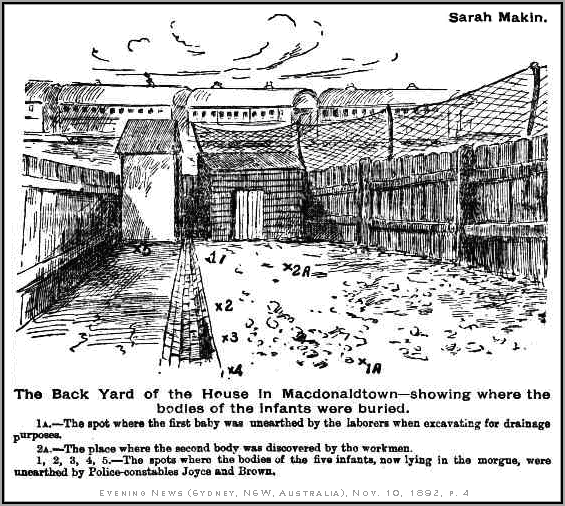 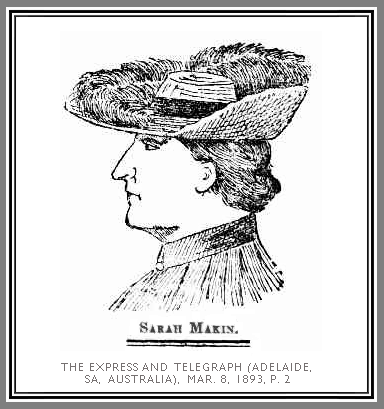 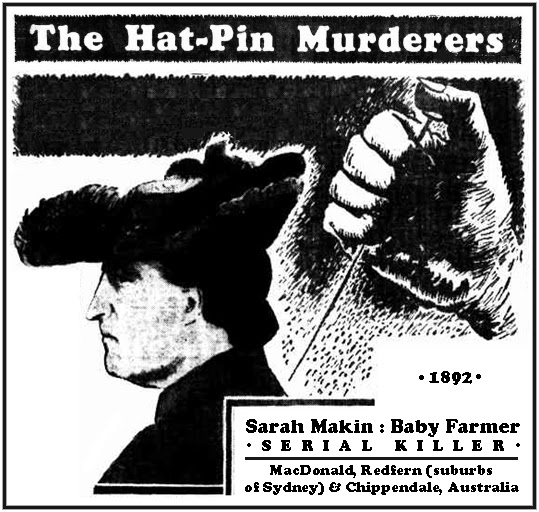 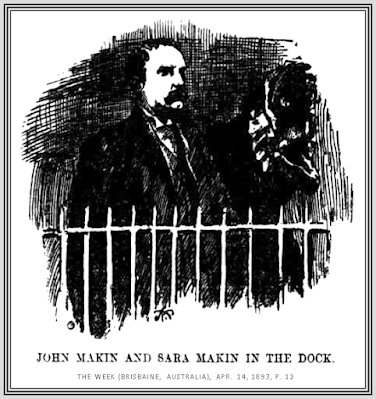 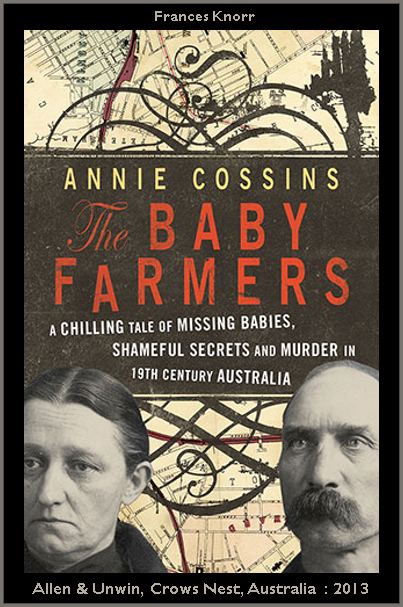