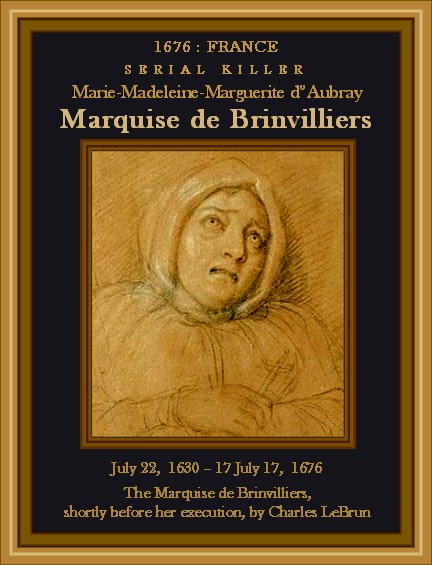 From Peter Vronsky: In France between 1664 and 1672, the aristocratic Marie de Brinvilliers was reported to have poisoned fifty or more victims. Prior to murdering her father, who opposed her marriage, and then her two brothers to seize an inheritance, Marie experimented with poisons concocted by her lover in hospital charity wards, where she began volunteering to care for patients. She carefully observed the effects of her poison on the patients, adjusting the doses accordingly. Marie was discovered and became a fugitive until she was captured in 1676 and beheaded in Paris.

ENCYCLOPEDIA BRITANNICA (1911): Brinvilliers, Marie Marguerite D’Aubray, Marquise de (c. 1630-1676), French poisoner, daughter of Dreux d'Aubray, civil lieutenant of Paris, was born in Paris about 1630. In 1651 she married the marquis de Brinvilliers, then serving in the regiment of Normandy. Contemporary evidence describes the marquise at this time as a pretty and much-courted little woman, with a fascinating air of childlike innocence. In 1659 her husband introduced her to his friend Godin de Sainte-Croix, a handsome young cavalry officer of extravagant tastes and bad reputation, whose mistress she became. Their relations soon created a public scandal, and as the marquis de Brinvilliers, who had left France to avoid his creditors, made no effort to terminate them, M. d'Aubray secured the arrest of Sainte-Croix on a lettre de cachet. For a year Sainte-Croix remained a prisoner in the Bastille, where he is popularly supposed to have acquired a knowledge of poisons from his fellow-prisoner, the Italian poisoner Exili. When he left the Bastille, he plotted with his willing mistress his revenge upon her father. She cheerfully undertook to experiment with the poisons which Sainte-Croix, possibly with the help of a chemist, Christopher Glaser, prepared, and found subjects ready to hand in the poor who sought her charity, and the sick whom she visited in the hospitals. Meanwhile Sainte-Croix, completely ruined financially, enlarged his original idea, and determined that not only M. Dreux d'Aubray but also the latter's two sons and other daughter should be poisoned, so that the marquise de Brinvilliers and himself might come into possession of the large family fortune. In February 1666, satisfied with the efficiency of Sainte-Croix's preparations and with the ease with which they could be administered without detection, the marquise poisoned her father, and in 1670, with the connivance of their valet La Chaussée, her two brothers. A post-mortem examination suggested the real cause of death, but no suspicion was directed to the murderers. Before any attempt could be made on the life of Mlle Théresè d'Aubray, Sainte-Croix suddenly died. As he left no heirs the police were called in, and discovered among his belongings documents seriously incriminating the marquise and La Chaussée. The latter was arrested, tortured into a complete confession, and broken alive on the wheel (1673), but the marquise escaped, taking refuge first probably in England, then in Germany, and finally in a convent at Liége, whence she was decoyed by a police emissary disguised as a priest. A full account of her life and crimes was found among her papers. Her attempt to commit suicide was frustrated, and she was taken to Paris, where she was beheaded and her body burned on the 16th of July 1676. [Encyclopedia Brittanica, 1911]

EXCERPT: Vol. II; Pp. 209-210 – Sainte Croix, who had been in Italy, was a dabbler in poisons. He knew something of the secrets of the detestable La Spara, and improved himself in them from the instructions of Exili, with whom he speedily contracted a sort of friendship. By him he was shewn how to prepare, not only the liquid poisons employed in Italy, but that known as succession-powder, which afterwards became so celebrated in France. Like his mistress, he appeared amiable, witty, and intelligent, and shewed no signs to the world of the two fierce passions, revenge and avarice, which were gnawing at his heart. Both these passions were to be sated on the unfortunate family of D’Aubray; his revenge, because they had imprisoned him; and his avarice, because they were rich. Reckless and extravagant, he was always in want of money, and he had no one to supply him but Madame de Brinvilliers, whose own portion was far from sufiicient to satisfy his need. Groaning to think that any impediment should stand between him and wealth, he conceived the horrid idea of poisoning M. D’Aubray her father, and her two brothers, that she might inherit the property. Three murders were nothing to such a villain. He communicated his plan to Madame de Brinvilliers; and she, without the slightest scruple, agreed to aid him: he undertook to compound the poisons, and she to administer them. The zeal and alacrity with which she set to work seem hardly credible. Sainte Croix found her an apt scholar; and she soon became as expert as himself in the manufacture of poisons. To try the strength of the first doses, she used to administer them to dogs, rabbits, and pigeons. Afterwards, wishing to be more certain of their effects, she went round to the hospitals, and administered them to the sick poor in the soups which she brought in apparent charity. None of the poisons were intended to kill at the first dose; so that she could try them once upon an individual without fear of murder. She tried the same atrocious experiment upon the guests at her father’s table, by poisoning a pigeon-pie! To be more certain still, she next poisoned herself! When convinced by this desperate essay of the potency of the draught, she procured an antidote from Sainte Croix, and all doubts being removed, commenced operations upon her grey-headed father. She administered the first dose with her own hands, in his chocolate. The poison worked well. The old man was taken ill, and his daughter, apparently full of tenderness and anxiety, watched by his bedside. The next day she gave him some broth, which she recommended as highly nourishing. This also was poisoned. In this manner she gradually wore out his frame, and in less than ten days he was a corpse! His death seemed so much the result of disease, that no suspicions were excited. 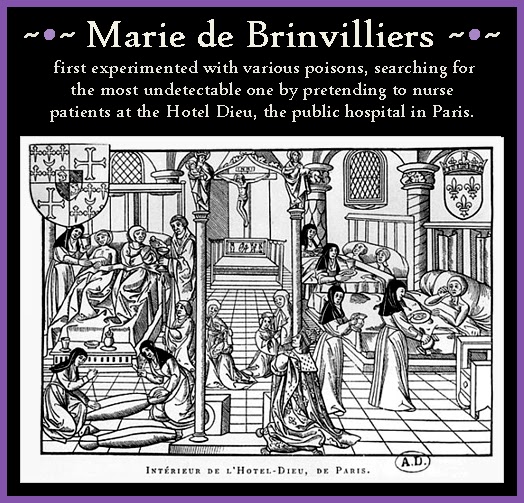 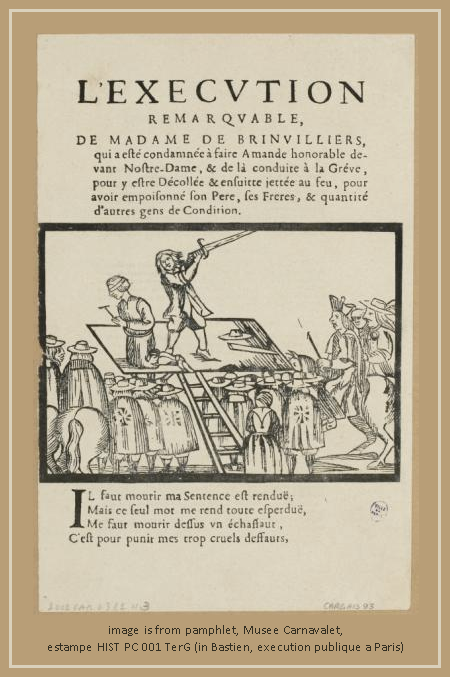 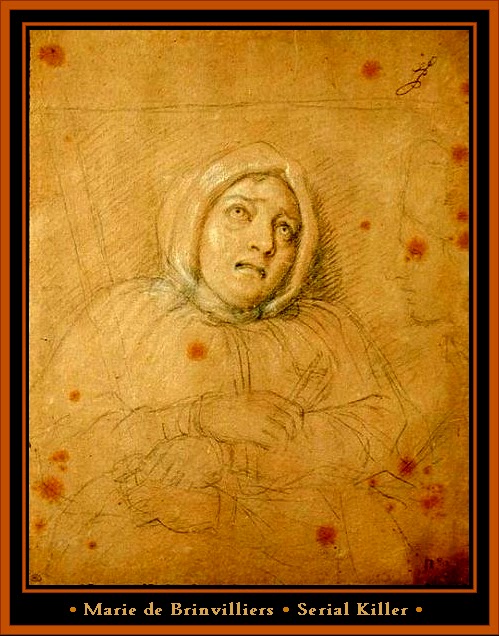 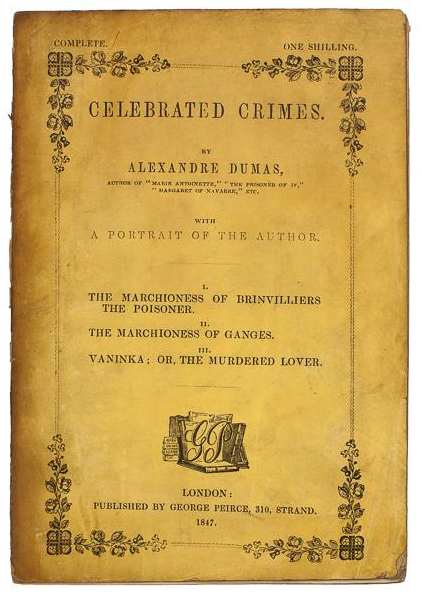 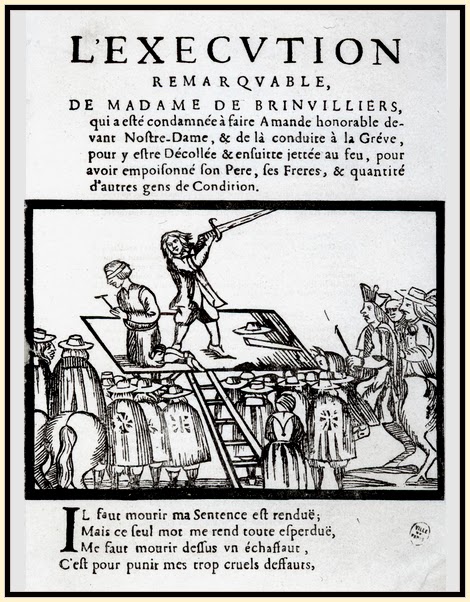 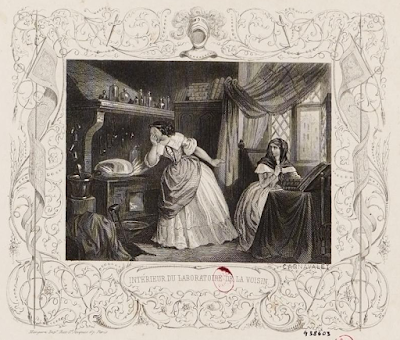