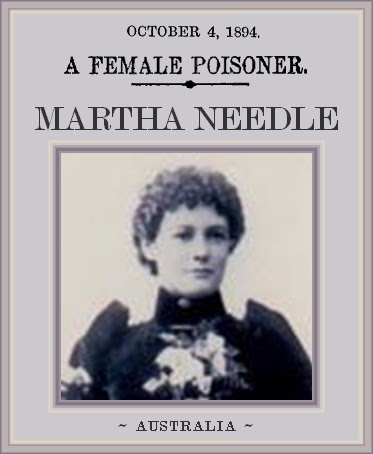 Martha Needle was executed by hanging at the Old Melbourne Gaol on October 22, 1894.

It is a bizarre fact that Martha Needle spent most of the insurance money she gained from murdering her family on an elaborate grave for her family, which she visited almost every day. [Jainilye, “Martha Needle 1863-1894,” FamilyTreeCircles.com] 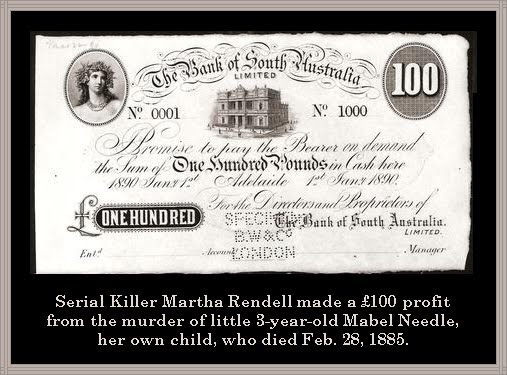 
FULL TEXT (Article 1 of 2): An analytical examination conducted yesterday by Mr. C. R. Blackett, the Government analyst, gave a graver significance to the Richmond poisoning case than it had previously presented. The examination to be made by Mr. Blackett was of the utmost importance, and was awaited with interest. Its result was sensational. The cup of tea prepared for Herman Juncken by Mrs. Needle just prior to her arrest was found to contain arsenic in such quantity that it would have been a fatal draught for any human being. Mr. Blackett has yet to examine the other articles which went to constitute the luncheon. Mrs. Needle’s own cup of tea was half consumed. It therefore could not have contained arsenic, and a superficial examination leads to the belief that Juncken’s tea-cup alone was poisoned. Yesterday morning the accused was brought before the City Court, and formally charged with attempted murder. Her bearing was calm and self-possessed, and during the few minutes occupied by Detective-sergeant Whitney in a brief recapitulation for the information of the bench of the circumstances of the case, she looked round the court without betraying the slightest agitation. A remand for one week was asked for and granted, and the accused was removed to the Melbourne Gaol.

While the result of the analytical examination was the single development in the investigation immediately concerned in the charge of attempting to murder Herman Juncken, there were many other items of information gleaned by the detectives in connection with Mrs. Needle’s history. These constitute such a  remarkable story that it may be accepted as certain that the body of Louis Juncken will be exhumed, and not at all improbable that the bodies of Mrs. Needle’s husband and their three children may also be disinterred, so that they may be examined, and the cause of their deaths settled if possible.

Mrs. Needle is a young woman, being now no more than 30 years of age, but she has had an experience of married life dating back over twelve or thirteen years. She is a native of South Australia, and lived during her youth at Port Adelaide. There she met and married Henry Needle, a carpenter, some years her senior. He was a capable workman, of good   physique, and well liked by his acquaintances and friends. Three children were born of the marriage, Martha, Elsie, and May, and the family removed to Melbourne about six years ago. They went to reside at Cremorne-street, Richmond, and later at the corner of Balmain and Cubits streets in the same suburb. During the first years of their Melbourne life Needle and his wife were apparently happy in each other’s company, and their neighbours looked upon them as a comfortably-situated and well-matched couple. When a year or two had passed, however, the relations were noticed to be less cordial. Mrs. Needle went out more often unaccompanied by her husband than had formerly been her practice, and Needle became jealous and morose. Rather more than three years ago one of the children, Martha, sickened and died. She was attended by a local doctor in his capacity as physician to one of the lodges of the Independent Order of Oddfellows, of which Needle was a member. About the time of the death of the child Needle went to Sydney in search of employment, but he did not remain long away, and when he returned the relations of the husband and wife were, it is said, less happy than they had been before. A few months later Needle was seized with sickness, and he, too, was attended by the lodge doctor. His illness did not last long, but it was remarkable for a circumstance set down by the doctor to irritability and obstinacy on the part of the patient. He refused to take any nourishment handed to him by his wife. Anything she offered to him he would wave aside,  or when pressed into anger would dash it over the floor or against the wall. The reason of  this was not known. Some friends of Mrs. Needle, who helped her in the nursing, remarked it as peculiar, but the dying man gave no explanation, and it was believed to be due to his ill-temper and his irritable disposition. Its effect was certainly disastrous, for as he only took nourishment when asked to do so by  strangers, he was not sufficiently fed, and he died ultimately, as the doctor’s certificate sets forth, of “sub-acute hepatitis, enteric fever, and exhaustion, due to obstinacy in not taking nourishment.” In plainer language the patient died from inflammation of the liver and of the intestines, and from exhaustion due to lack of nourishment.

After Needle’s death his wife appeared to be short of money. She gathered her husband’s tools of trade and his books together, and these she disposed of by a raffle or art union amongst her friends, pushing the sale of tickets by the statement that the death of her husband had left her altogether without means. Within the next twelve months the two remaining children died, one in a long illness, which was believed to be a sort of low fever, and the other in a short and sharp attack of sickness following upon influenza. The quick succession of deaths in a family robust and apparently strong, secured considerable sympathy for Mrs. Needle, and the funerals of her children were attended by many anxious to show that they appreciated the severe trial she had undergone.

The death of the last child severed Mrs. Needle from her associations in Cubitt-street. She told the neighbours that she was compelled to leave the locality because the deaths of her husband and children there had caused her to look upon it as unhealthy. She did not go far, however.

Otto Juncken, the young carpenter who lived with his brother Louis at the saddlery shop, 137 Bridge-road, had made the acquaintance of Henry Needle when both were engaged on some carpentering work together. The acquaintance had been cultivated, and when Mrs. Needle had been left a widow and childless Otto offered her the opportunity of taking and using as a boarding-house a portion of the two-story building occupied by the Juncken brothers in Bridge-road. Mrs. Needle accepted the offer, and without any delay she was installed in her new position. Otto and Louis boarded with her, and one or two others made up a full establishment. That was in June, 1892. The household remained a happy one until some months ago. Then the attachment of Otto for the widow and  an engagement for marriage, it is said  provoked the ill-feeling and the opposition of Louis and the rest of the members of the Juncken family. What followed has been  already told. On 26th April Louis sickened, and on the 15th May he died. His symptoms were peculiar, but Mr. M’Coll, M.B., who attended him, saw nothing suspicious, and gave a certificate of death from ulcerative endocarditis. The body was removed to South Australia for burial, and it was interred in the family grave in the Lyndoch Cemetery. After the burial, Herman, another brother of the deceased, came to Melbourne to wind up the business affairs of Louis. He was accompanied by his sister, Mrs. Emma Jones. Several days after his arrival he fell ill, as has been described, and the discovery of the arsenical poisoning was made by Dr. W. R. Boyd, who was called in to attend him on Sunday last. While he was lying ill, and before he knew anything of  poisoning Mrs. Needle gave Mrs. Emma Jones, who was residing with friends in Sherwood-street, a pressing invitation to go to tea. Herman advised her not to accept the invitation, and she did not do so, much to the disappointment of Mrs. Needle, who professed to feel slighted by the refusal.


FULL TEXT (Article 2 of 2): Melbourne, September 28. – At the trial of Mrs. Needle on the charge of poisoning her children, counsel put in a plea that if she committed the crime of poisoning Juncken and her own children the most have been insane. The judge, in his summing up, said that there was no evidence of insanity. The jury returned a verdict of “Guilty.” Mrs Needle protested her innocence, and received the death sentence with calmness.

Martha Needle was arrested on a charge of attempting to poison Hermann Juncken, brother of Louis. Louis, a man of 30 years went from South Australia to Melbourne to visit his brother Otto. He stayed with Mrs. Needle, who was passionately attached to Otto, and with whom he was boarding at 137 Bridge road, Richmond. Shortly afterwards Louis was taken ill and died. The family of Junckens reside at Lyndoch, in South Australia, and the body was buried there. After the funeral Hermann returned to Melbourne to settle his late brother’s affairs, and he also stayed at Mrs. Needle’s. While there he was taken ill, and on going to the doctor he was warned that poison had been used. Through a clever ruse some meat and a cup of tea which had been prepared for him were secured by the detectives. In this traces of arsenic were found. The body of Louis was disinterred, and the result of the analysis of the contents was a charge of murder. Otto Juncken received several letters from Mrs. Needle. One written on May 22 last, concluded as follows: — “I could be thrown aside; but remember this on the day you cast me off for your mother. You will soon be motherless, for I shall kill her” (the word kill is underlined), “if I have to walk every step to Lyndoch. I have vowed to my God to do this.” Mrs. Needle (née Charles) “was married in 1882 in Adelaide, at the age of 19, to Henry Needle. The marriage was not happy. Mr Needle died, under suspicious circumstances. His body and the bodies of two of their children. who died later were exhumed and poison found. Henry Needle died on October 4, 1889. Dr Hodgson, who attended him, certified that the cause of death was sub-acute hepatitis, persistent vomiting, enteric fever, and exhaustion due to obstinacy in refusing to take food. The daughter Elsie, aged six, died on December 9, 1890, after an illness of three weeks. Dr. Hodgson certified the cause of death to be gangrenous stomatitis and exhaustion. The daughter May, aged four years and eleven months, died on August 22, 1891, and the cause of death was certified by Dr. Haynt as tubercular meningitis. Henry Needle insured his life for £200 in the Australian Widows’ Fund on June 22, 1889. He died intestate, whereupon Mrs. Needle drew one-third of the money as her share, and received the other two-thirds when her children died.

***
Martha Needle was known for poisoning her husband, 3 children and future brother-in-law, and was hanged on 22 October 1894 at the age of 30. Martha was convicted for the murder of Louis Juncken, brother of her fiance Otto Juncken, on 15 May 1894. Although Martha collected substantial sums of insurance money this was not the motive for her own family which was never determined. [Wikipedia] 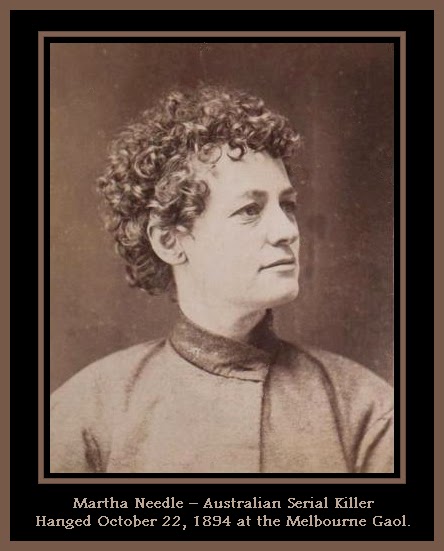 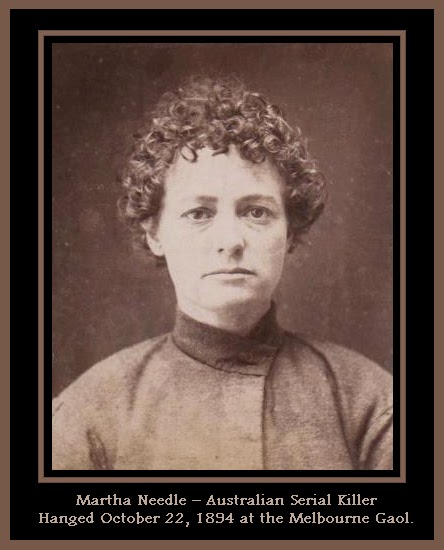 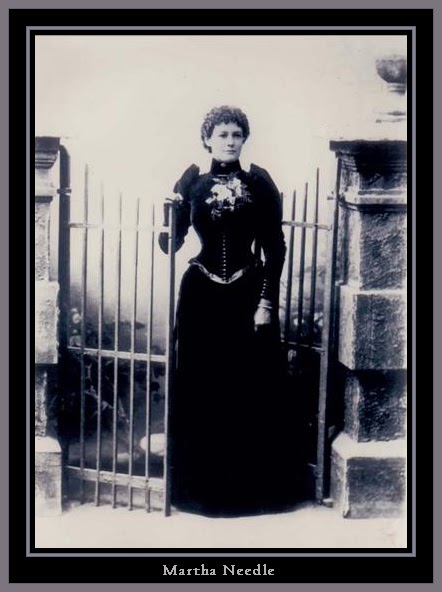 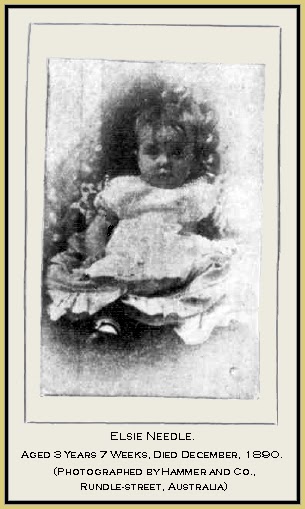 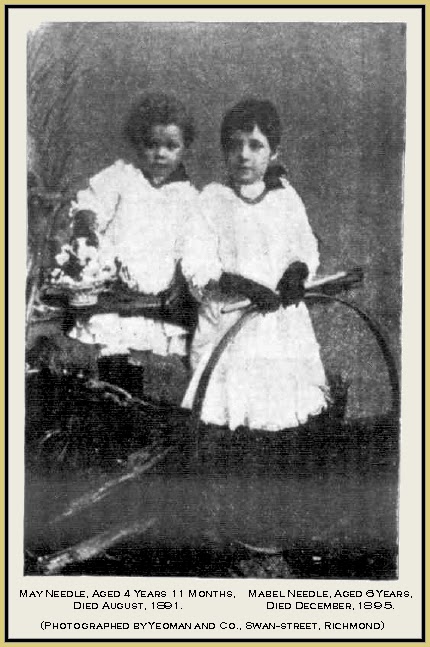 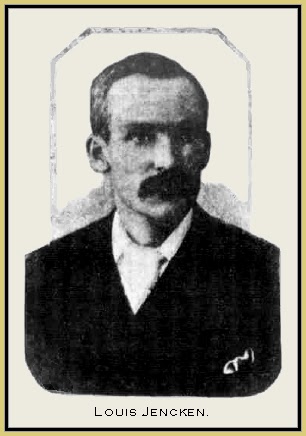 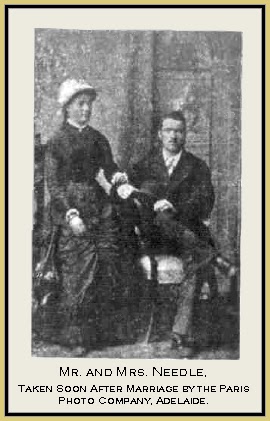 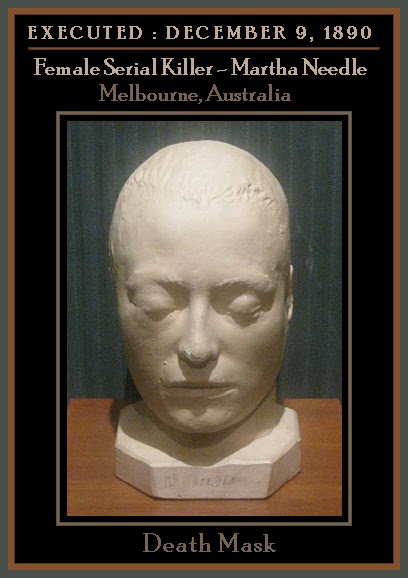 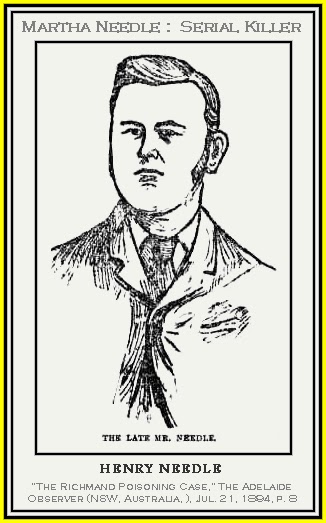 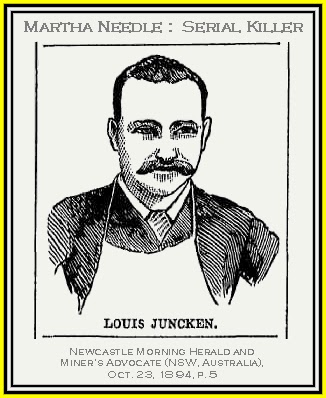 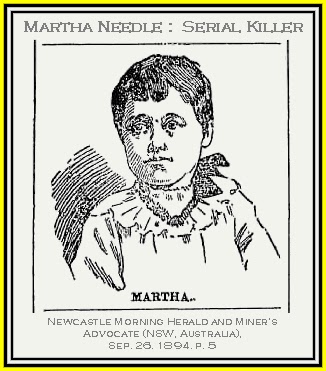 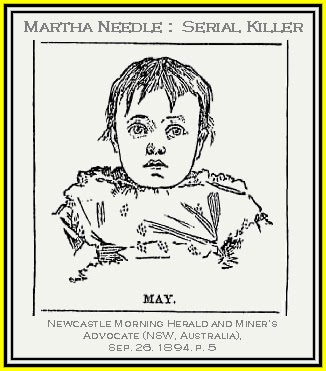 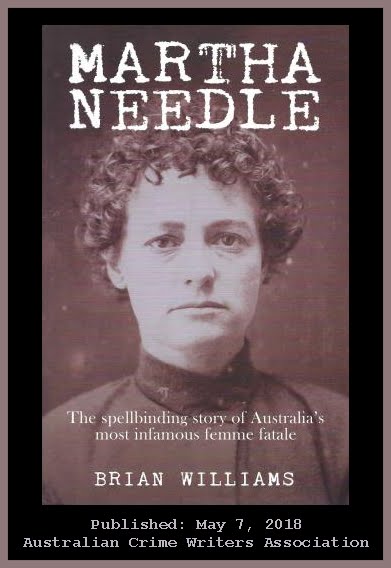 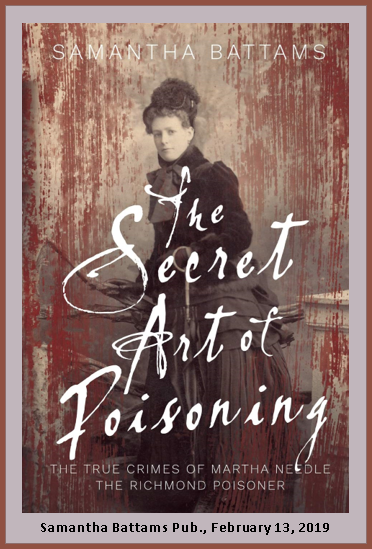