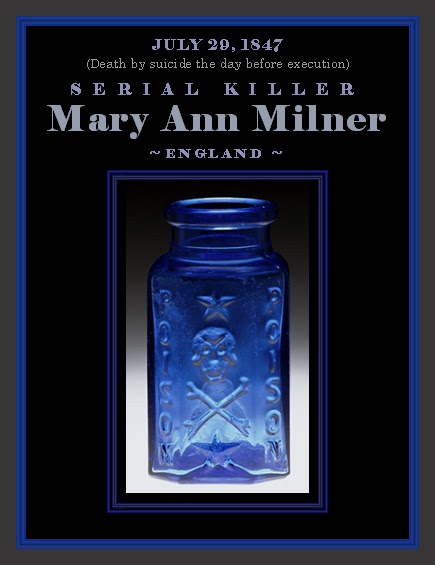 FULL TEXT: The following circumstantial statement has gone the round of the press:—” The young woman, Mary Ann Milner, who was condemned to death at the Lincoln assizes, for the wilful murder of her mother-in-law, her sister-in-law, and her niece, by poisoning them with arsenic, expiated her dreadful offence on the scaffold, at the City gaol of Lincoln, on Friday, the 30th ult., at noon. The only imaginable motive for the conduct of the wretched woman (who confessed her guilt) was the obtaining moneys from burial clubs on the deaths of the deceased. In proceeding to the drop she conducted herself with much composure. The usual preliminaries were quickly adjusted, and the drop having fallen, the wretched murderess, after struggling a few seconds, ceased to exist.” This statement is unfounded. The unfortunate woman hung herself in her cell a few hours before the appointed time. An inquest was held on the body on the following day, and a verdict of “felo de se” Was returned. The error arose through the officials at the gaol allowing a report to be circulated that Milner had been privately executed within the walls of the prison.

FULL TEXT: THERE have been few cases in the annals of modern crime of more terrible importance to society than that of Mary Ann Milner, tried at the recent assizes for the county of Lincoln, before Mr. Baron Rolfe. The unhappy culprit, it will be remembered, had administered poison in succession to her father-in-law, her mother-in-law, her sister-in-law, and her niece. For a while the murderess was triumphant. She had attained the control over a secret and powerful agent. It was in her pleasure to spare life or inflict death. The disagreements which in another household would simply have furnished the subject of a domestic broil, were in her opinion ample pretext for inflicting a terrible death upon those who were so incautious as to give cause of offence to her sullen and suspicious temper. According to her own confession, made to the Rev. Mr. Ritchie, the chaplain of the gaol, the reason for making away with her brother's wife was simply some paltry domestic bickering between the husband and wife, in which she herself had been mixed up. For this cause it was she drugged a cake with arsenic, and offered it with simulated kindness to the woman she had marked for death. But her revenge to be complete must be more sweeping still. The infant child of the woman she had just murdered, must be consigned to the same grave. There was no occasion in this instance for much manoeuvring or dexterity. A pinch of arsenic dropped into the child's cup, and all was over. There must be some horrible fascination in the nature of these secret crimes against life, which removes them from the common category of murder. In other instances, in the case of those who have destroyed life by open violence, you find them pursued by the images of their victims from place to place. This misery is greater than they can bear; they wander, conscience stricken, round the world; and, even if undetected by the agency of others, they are often to be found entering the courts of justice as self-accusers, and demanding, as a relief, to expiate their crimes upon the scaffold. Not so in the case of poisoning. One crime is the prolific parent of another. Almost invariably it will be seen that the criminal who has once engaged herself—it is a woman's crime—in so fatal a career, will have sacrificed her friends and relatives by twos and threes, until the suspicion of those about her ripens into certainty, and she is hurried off before the tribunals for judgment.

Be this as it may, it would seem that the father and mother of Mary Ann Milner's husband were marked out as the next victims. They did not treat her well, she said, and this ill-treatment she explained to mean that they came to her house on all occasions as though it was their own. They took and did what they liked. They paid no regard to her, that was the sum of their offence. She determined, as she says, to rid herself of the father; the death of the mother she imputes to accident, and not to her own intention. A little more of her poison was mixed up with a pudding, which was by her deliberately set before the old man, and of which he partook. His wife, as Mary Ann Milner told the clergyman, must have eaten by accident a portion of the poisoned dish that had been put away. We attach but little credit to her statement; for it is a strange feature in the idiosyncrasy of criminals of the class to which Mary Ann Milner belongs, that they will make at their dying hour some such reservation as this, and endeavour to cheat themselves and others into the belief that they were not wholly guilty, and are therefore entitled to a certain amount of commiseration.

Even if the case were as she represents it, for what purpose was the poisoned dish put away f Conceive the horrors of that cottage on Barnetby-le-Wold, where the means of death were scattered round the house in every cup, on every dish. The case even so appears worse, for the wretched murderess must have well known what the consequences would be of incautiously leaving here and there the instruments of her revenge.

For these offences at the last assizes for the county of Lincoln MARY ANN MILNER was most justly condemned to death. She was to have been executed on Friday last at noon, but she avoided her sentence by hanging herself in the cell she was confined in on Thursday night. Whatever salutary warning might have resulted to others from spectacle of her ignominious death has thus been low. Although, from the statement of Mr. Nicholson, the governor, and Mrs. Johnson, the matron of the goal, it would seem that the prison authorities did not depart from their usual system in her case, that usual system was so evidently insufficient for the purpose that we cannot hold them free from blame. The wretched woman was left alone in her cell on the night previous to her intended execution; there was not even a candle in the room!

The statement of Mr. Nicholson is, that there was no order on the books for a criminal condemned to death to have a person to attend upon her; but there is most assuredly in these cases a discretionary power vested in the governor of a goal. There was no order on the book which forbade MR. NICHOLSON from directing such attendance. It is the common practice, we believe, at the Old Bailey, to direct a prisoner to be watched day and night in the interval between sentence pronounced and execution done. If the rule be not inflexible both at the Old Bailey and in all other gaols of the kingdom, it should be made so.