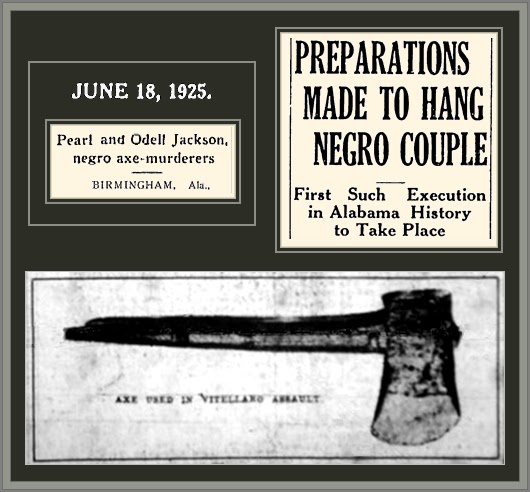 FULL TEXT: Birmingham, Ala., June 18 – For the first time in Alabama’s history, a husband and wife will die on the same gallows here tomorrow. It will also be the first time since the civil war that a woman has been hanged in this state.

Preparations were completed today for the execution of Pearl and Odell Jackson, negro axe-murderers, in the yard of county jail. The scaffold has been oiled; the ropes stretched, the pardons board has refused clemency, and the case was before Governor Brandon. There were reports at the court house that the  governor will refuse to intervene. The two negroes, occupying death cells that face each other across a narrow corridor, were today awaiting the end, studying their bibles and hoping against hope for some last minute action from the governor that would save them.

If Governor Brandon does not intervene, Odell Jackson will mount the scaffold at 10 o’clock. When his body is cut down a few minutes later, Pearl Jackson will ascend the steel steps and stand on the same trap – to join him on the long road that was predicted for them more than a year ago by the negro woman who caused their conviction.

Pearl Jackson and Mary Frances had both been sent to the county farm and one day, while two detectives were close, the women had a heated argument.  Pearle, in various language, was denouncing the other negro.

“You’d better look out,” retorted the Sanders negro, “if you don’t stop, I’ll send you and your old man far away from here.”

“Anything done in the darkness is sure to come to light.”

The detectives put the woman thru a thorough questioning. Finally she confessed that Pearl and Odell Jackson had murdered Robert Turper, a white man, on January 6, 1923.

The killing was one of Birmingham’s long series of axe crimes which covered a period of three years and claimed 26 lives in addition to the serious wounding of 21 other persons, both white and negroes.

Mary Frances Sanders, the state’s star witness, testified that she was playing cards with Pearl and Odell Jackson and that the two negroes planned to go out and rob some white man for money. They took an axe, she said, and declared they were going “skulling.”

It was chiefly on this testimony that they were convicted. 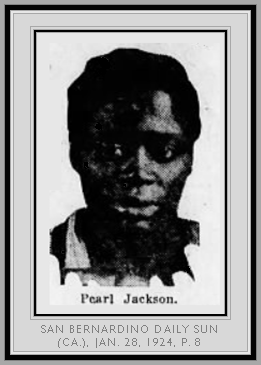 
NOTE: Some believe that the Birmingham axe murders were actually committed by members of the Italian mafia in an effort to muscle in on the city. The Jacksons and three other suspects were given a drug, scopolamine, before they confessed. Their execution was delayed twice and the day before they were to be executed (on the third execution date, Aug. 7, 1925, in a span of two months) their sentences were commuted by Governor Brandon. The case is discussed at length from a contemporary perspective:

Jeremy Gray, “The trials of 'The Axemen of Birmingham':Drug-induced confessions lead to winding courtroom drama,” all Alabama (al.com), Feb. 20, 2013 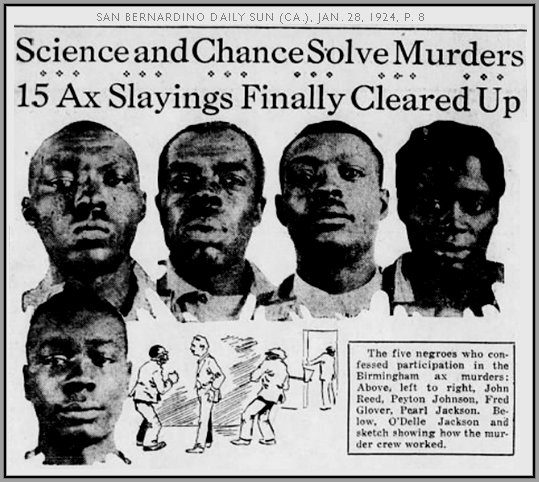 Email ThisBlogThis!Share to TwitterShare to FacebookShare to Pinterest
Labels: Female Serial Killers, Give 'em the Axe