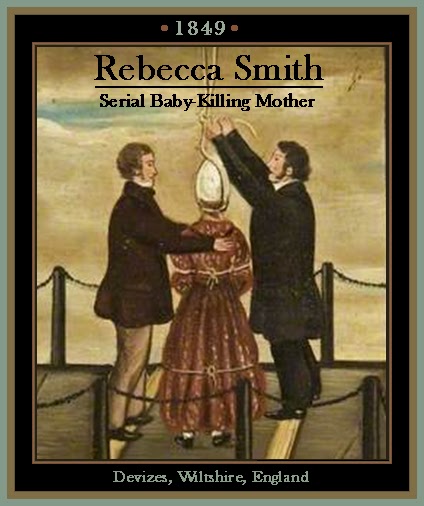 FULL TEXT:  The execution of Rebecca Smith took place on Saturday [Sept. 1] forenoon, in front or the New Prison, Devizes. It is impossible to give anything like a correct calculation of, the number of persons present to witness the awful scene, they were countless. From nine until eleven o’clock, people poured into the towns in shoals – on foot, in wagons, boats, and by the latter hour, the prison yard, the banks of the canal, every tree, hedge, and field that could command a view of the drop, appeared crammed. Still the roads were lined with persons thronging to the spot. People were there from every part of the country – old and young, and infants; but they were chiefly of the labouring classes, and there were thousands more of women than of men.

From the period of miserable woman entered the prison to the moment of her execution, her conduct was most becoming. Mild and contented in her manner and deportment might be thought that she was totally incapable of the unnatural crime of which she was convicted. Free from guile or hypocrisy, she at once unhesitatingly confessed her crime, and acknowledged the justice of the punishment that awaited her, and frequently expressed a hope that others would take warning by her fate. At the same time she was extremely ignorant, and betrayed a want of any deep feeling. She could read but imperfectly, and what she did read she was scarcely able to understand. The pious and excellent chaplain-had been unceasing in his endeavours to awaken in her the true spirit of penitence and-prayer; but, as may be supposed, he had a difficult and a laborious task. Suspended between hope and fear, she would at times rely on the unbounded mercies of her Saviour, and at times exclaim, that her sins were too great to be forgiven. For several days prior to her execution, her mind appeared to be so entirely occupied with the thoughts of her fate in the world to come, as to destroy all feeling regarding die miserable end that attended her in the present world. The manner in which she was to quit this life did not appear to trouble her. It was the dread of the hereafter – and if it be possible to judge of the human heart from outward observances, it may be said that she was at length brought to a proper sense of her awful situation, and was truly penitent

On Tuesday last, her husband and daughter, accompanied by her brother and sister, and some other members of her family, were admitted, for the last time, to see her. Strange to say, there was such a total absence of feeling on the part of the husband, as to induce some remarks to be made on his conduct, but without any good impression. The sister, on the other hand, was deeply affected, as was her brother; both of them wept bitterly. As the time approached for her execution, she appeared to feel more deeply her dreadful situation, and she passed rather a restless night. But she afterwards recovered her wonted calmness; and ate a moderate breakfast in the morning.

Shortly before twelve, the solemn tolling of the prison bell announced that she had but a few minutes more to live, and she was ushered from her cell. Accompanied by the proper authorities, she was at once conducted to the gallows, the rev. chaplain impressively reading portions of the burial service as the procession proceeded. During this time she did not utter a word, nor did a sigh escape her; but her countenance appeared quite composed, and her step firm. Arrived on the drop, the rope was in a moment round her neck; she clasped and raised her hands together, as if in fervent prayer, and after a slight struggle she was launched into eternity.

She was about forty-four years of age—had been married eighteen years, and had eleven children—the eldest only, a daughter, is now alive. The second, a boy, died of a bowel complaint, at the age of fourteen weeks. All the rest, with the exception of the last but one, the unhappy woman acknowledged that she poisoned a day or two after their birth. She was extremely ill herself when this child was born, and it was in consequence taken to a neighbour; it died a fortnight afterwards, but she never even saw it after it was taken from her. Seven of her children she destroyed by administering to them a poison she called “blue,” used for destroying rats and mice, and which she said she took from the ricks, where it had been placed for that purpose. The last child she poisoned with arsenic, and in each case she put the poison in the child’s mouth with her finger. She implicated no other person in the crime; she, and she alone did it, and no one else knew anything about it. She toiled hard in the field during the day, and at night she came home and washed, and did all the household work. 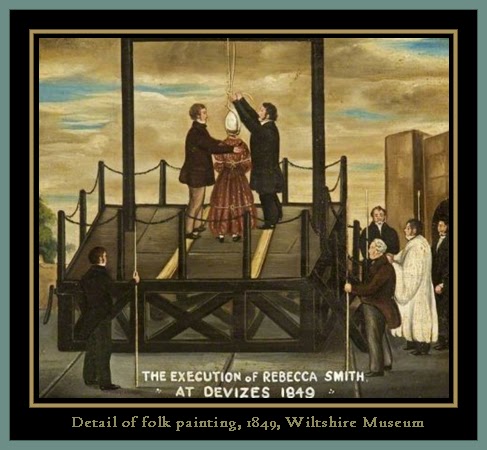