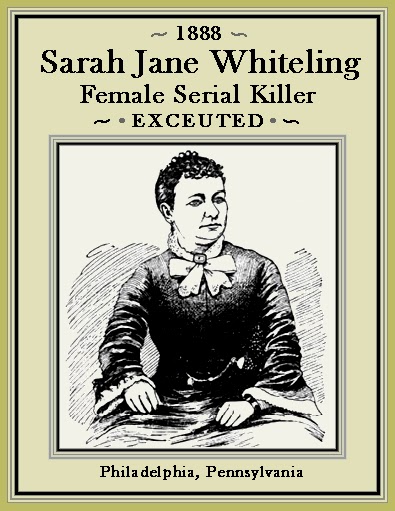 Sarah Jane Whiteling was executed by hanging in Philadelphia at Moyamensing Prison on June 25, 1889.

FULL TEXT: Philadelphia, June 13.—One of the most horrible poisoning cases that this city has ever known, has been discovered and the murderers, through the vigilance of Coroner Ashbridge, was yesterday afternoon lodged in jail. John Whiteling, aged thirty-eight years, his alleged wife, aged forty, his alleged daughter, Bertha, aged nine years and his son, Willie, aged two years, lived in the rear of No. 1227 Cadwallader street. John Whiteling died on March 20; Bertha on April 25, and Willie on May 26. The doctors in attendance gave certificates of death respectively for “inflammation of the bowels,” “gastric fever,” and “congestion of the bowels.” There was an insurance on the lives of each, ranging from $200 down to $50. The coroner accidentally hearing on the case, and having his suspicions aroused bad the bodies exhumed and a chemical analysis made of the intestines, and found arsenic in all.


The woman was sent for by the coroner and after denying all knowledge of the crime, made a full confession. She said she was born in Germany and married a man in Iowa named Tom Brown and that Brown died in prison, and in 1880 she married John Whiteling in this city. Her daughter Bertha was the child of a man, named Story. Whiteling, she said, was sick much of the time. She procured “rough on rats” and said that her husband committed suicide.

She gave the children the poison, and then summoned a physician, but did not administer the medicine prescribed. She said she could not go out washing with a baby resolved to get rid of Willie; that she was afraid Bertha would grow up a bad woman and she had better die, and that she was if raid if she poisoned them all at once she would be found out.

Mrs. Whiteling came to this city just after the Chicago fire in 1872 and has lived in houses of assignation both here and in Chicago. She is frivolous in manner and was only brought to the consciousness of her position when confronted with the evidence if her crime.

When she had finished her confession she said her conscience was clear and that she would meet her dear children in heaven. An inquest will be held on the bodies on Friday next. 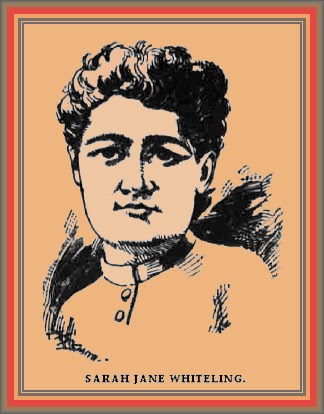 FULL TEXT: Philadelphia, Nov. 28.—The jury in the case of Mrs. Sarah Whiteling, who has been on trial for the past three days on a charge of causing the death of her nine-year old daughter by administering poison in April last, brought in a verdict of murder in the first degree this evening, after being out two hours. The crime for which Mrs. Whiteling was tried was one of a series of three with which she is charged, the allegation being that she not only murdered her daughter, Bertha, but also her husband, John Whiteling, aged thirty-eight, and their baby boy, William Whiteling, aged two years, and collected insurances on the lives of her victims amounting in the aggregate to over $350. The wife and mother subsequently confessed her crimes, and said that she had intended to take her own life after completing her deadly work with all the other members of the family, but her courage failed her.

FULL TEXT: There was intense excitement up in Cadwalader street last night when it was reported that Mrs. Whiteling had confessed that she had poisoned her children. Many did not even know of the woman’s arrest, and in a short time groups of excited women and men stood about the sidewalks and discussed the woman’s horrible crime.

Mrs. Whiteling was not very well known to most of her neighbors, but was considered “a nice, quiet woman” and the people were startled when they learned of her confession. Everybody sympathized with her when she lost her husband and two children, but the story of her crime as it spread through the neighborhood last night stirred up the wildest kind of indignation and scores of men and women said they hoped she would be bring.

The indignation boiled over when it was reported that Mrs. Whiteling, in order to divert suspicion from her own household, tried to poison the little ones of Nathaniel Martin, her next door neighbor, at 1229 Cadwalader street. One of the little Martin boys is now in the country very sick from the effects of being poisoned by candy which it is said Mrs. Whiteling gave him just before her oldest child died.

WOULD NOT SEE HER HUSBAND DIE.

Mrs. Gilbert, of 1219 Cadwalader street, who was called into the Whiteling home when the woman’s husband died, had just gotten out of a sick bed last night when she said:

“I had only known Mrs. Whiteling by sight when one day her little girl. Birdie, told me her father was sick and her mother wanted me to come in. I found the man in the most intense agony. He was appealing for relief, but his wife stood by and said she didn’t know what to do. I urged her to buy some lime water and she finally sent after five cents’ worth of lime water and hot warm irons to his stomach and back.

“The next night she again sent after me and the night he died I was again called for. His sufferings were horrible and I did every thing to relieve him, but it was no use, and when I saw he was dying I ran down stairs and told his wife. She said she didn’t want to see him die. I begged her to come and speak to him before he breathed his last, but she refused. I ran up to the room again with old Mrs. Jarvis, who lives in the front part of the house, and bathed his head and held his hand as he passed away.”

Mrs. Whiteling didn’t cry when I told her that her husband was dead. She said she was almost heart-broken, but could never cry when she was sorrow-stricken. know nothing of her children’s death, as I was men sick in bed.”

“She’s a villain,” said Mrs. Martin, the next door neighbor of Mrs. Whiteling. “Thank the Lord for saving our children from her, though one of my little boys is sick in the country now since he ate candy which was given to him by Mrs. Whiteling. My boy was taken sick at the same time as her Birdie and when her child died Mrs. Whiteling told a neighbor she was surprised that my child was still living. My husband one night caught her giving candy to two of her little ones, who were in a coach on the sidewalk. He was suspicious then and he threw the candy into the street I thought it very strange that she kept feeding our children on candy. When her husband and children died she never cried, and she rocked herself in a chair while the bodies were washed and dressed by kind hearted neighbors. When her first child died so mysteriously I wanted her to have a post-mortem made, but she refused.

DID SHE KILL THE OTHERS?

“She told me that she had had eight children, but didn’t say what had ever become of them.

While her husband was suffering Mrs, Whiteling paid little attention to him. He was given little nourishment, and one day John Pomoroy, of Third and Poplar streets, a boyhood friend of Whiteling, gave the woman money and made her buy a little strengthening food for the dying man.

“Just after his funeral she was talking about her future plans when she said to Mrs. Martin: ‘Oh, I would soon get married again it I could got a good chance.” When her pretty little daughter Birdie was dying she neglected her shamefully, while at the time professing the deepest sorrow. She had received the insurance money on her husband’s death, but claimed to be too poor to buy medicine and nourishment for the child. When Mrs. Martin asked her where the insurance money was Mrs. Whiteling said she had put it in the Philadelphia Saving Bank, but could only got it out on two weeks’ notice. Mrs. Martin then insisted on buying medicine and sending it in the house, when Mrs. Martin would go to the bedside of Birdie the child would beg for water or medicine, and say mother gave her but little.

“Birdie, a sweet-laced, dark-haired child, was the favorite of the Webster School, on Master, near American street, and when she died all the children gave their pennies and bought a beautiful floral scythe. When it was brought to the house the dead child’s mother was sitting on the front step with the white crape fluttering in her face. She stayed there until a little girl reproved her and told her it was unbecoming. After Birdie’s funeral, Mrs. Whiteling took the floral scythe to a young girl on Cadwalader street and told her to work the emblem over again, as she thought her little Willie would soon join his sister, and the scythe could do service at his funeral. Willie was not sick then. The night before the little toddler died it lay on the hard floor of the room, while the mother lay in bed with her little niece. The next morning she sold Willie’s rocking chair to a neighbor for a quarter. She said he was going to die. An omen during the night had told her so. Before her husband was taken sick she took him and the two children and the family had their photographs taken.”


Note: A very long front page article appeared in the Cincinnati Enquirer on June 26, 1889, which includes the long text of Mrs. Whiteling’s confession. The newspaper is available on newspapers.com.


The Whiteling case is discussed in detail in the following book: Marlin Shipman, The Penalty Is Death: U. S. Newspaper Coverage of Women's Executions, U of Missouri Press, 2002 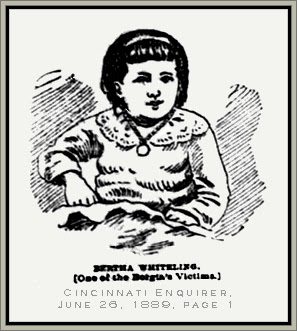 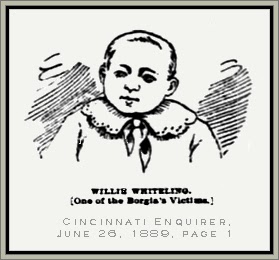 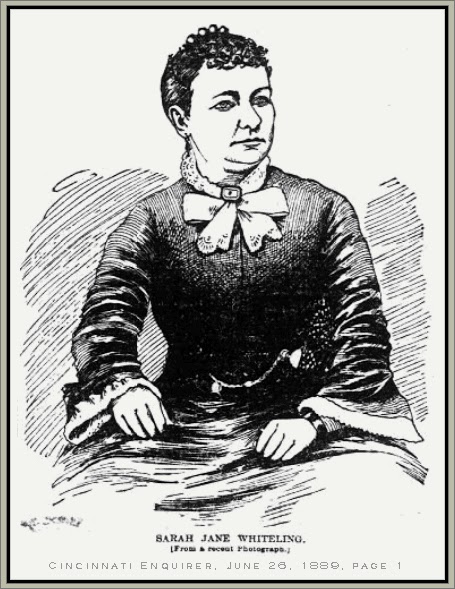 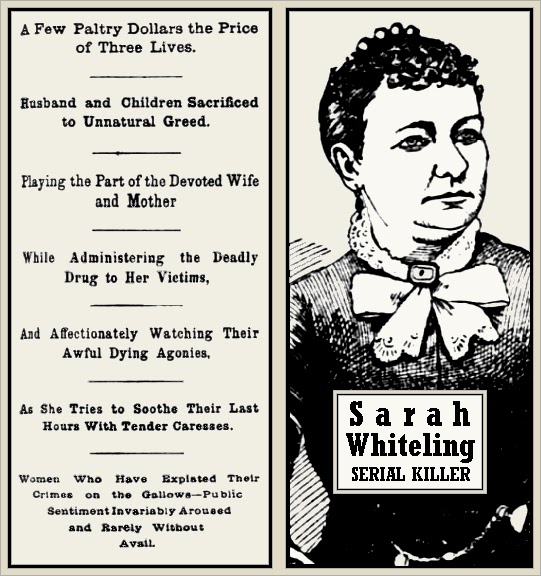 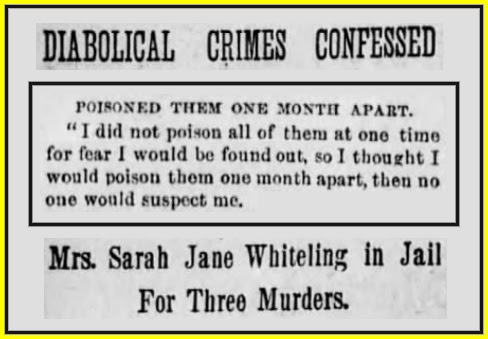 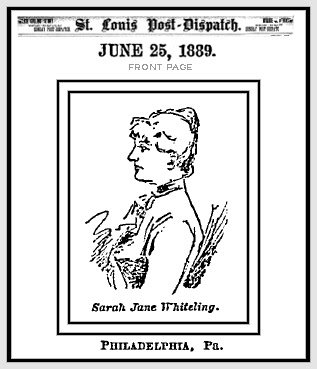 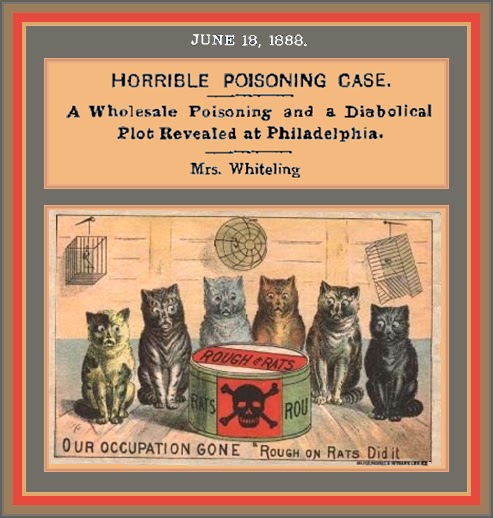 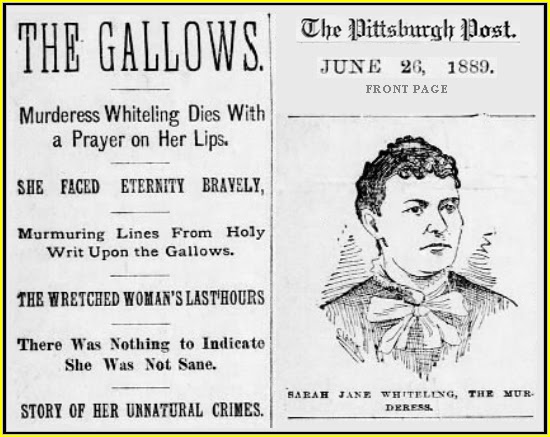 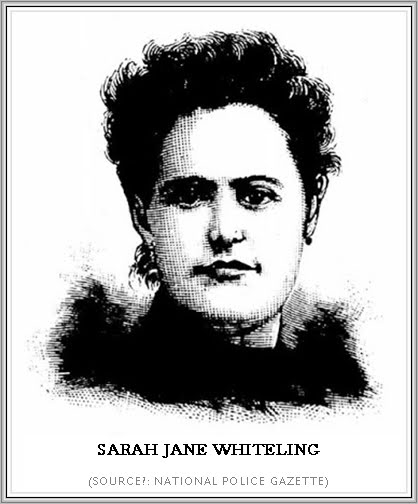 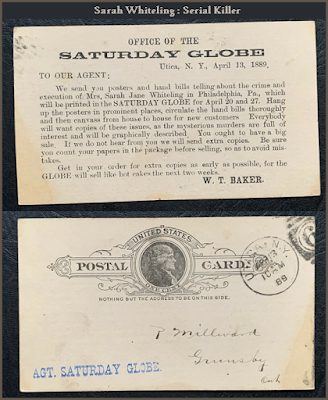