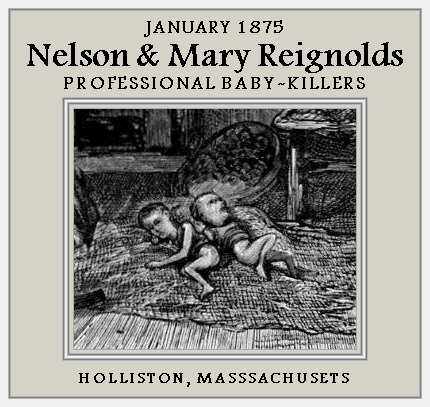 FULL TEXT: The usual quiet town of Holliston, in the southern part of Middlesex county, was the scene of considerable excitement to-day upon the announcement that a case of wholesale poisoning had been brought to light, the alleged guilty parties being an old couple named Nelson and Mary Reignolds, who, during the past three years, have kept a sort of “baby farm” in that part of the town known as Bragville.

From what can be learned in regard to the matter, it appears that the Reignolds, who occupy a small farm, have been constantly receiving young children, more particularly during the past three months. The majority of those received during the latter period were infants of illegitimate birth, who were in most cases very sickly and feeble. Some of them died, from time to time a natural death, as was supposed, and no serious suspicions were entertained until a few weeks since, at which time the character of the old couple became a subject of discussion among the neighbors, many of whom do not express a very good opinion of them. It was known that doctors belonging to the town and other places in the vicinity were in the habit of visiting the infants in the care of the old couple, and this fact in itself in many instances served to allay suspicions entertained by many people that the deaths of the infants in some cases were the result of cruelty.

A few days ago officers J. D. Shipplee and Mahoney, of Holliston, became almost convinced in their own minds that some of the infants that bad died had been foully dealt with, and were quietly awaiting developments when yesterday they were afforded valuable information from a source the least expected through the person of Miss Mary Colby, a young woman who had been in the employ of the good woman Reignolds, in place to take care of the children. From statements made to officers by this woman the utmost wantonness and depravity of human feeling appeared on the part of the odd couple. It was charged that in many cases infants, in an apparently healthy condition were actually murdered by poison in the form of laudanum.

Between the 1st of November up to the 17th of the present month five infants were put out of the way in this manner. The last child that died was called Franklin Pierce, and was brought from Boston in the early part of January. It was alleged by Miss Colby that the Reignolds, to prevent detection buried the infants without notifying the town clerk or receiving burial certificates. She was positive this was the case in the death of three of the children. Her statement, which includes numerous details, could not be got at, owing to the desire of the officers to keep the matter quiet until an examination could be had in the case. Miss Colby, it is said, was the mother of a child that has been cared for at the Reignolds’ farm. She belongs to Maine and is quite young and prepossessing.

Other important information bearing on the alleged cruelty and heartlessness of the pair is given by an elderly woman named Miss Eliza Sheenan, who has been employed by Mrs. Reignolds on the farm for about a year. Her story is mainly corroborative of that of the Colby woman, but more important, from the fact thus she furnishes the bottle containing a portion of the poison said to have been given to the infants. 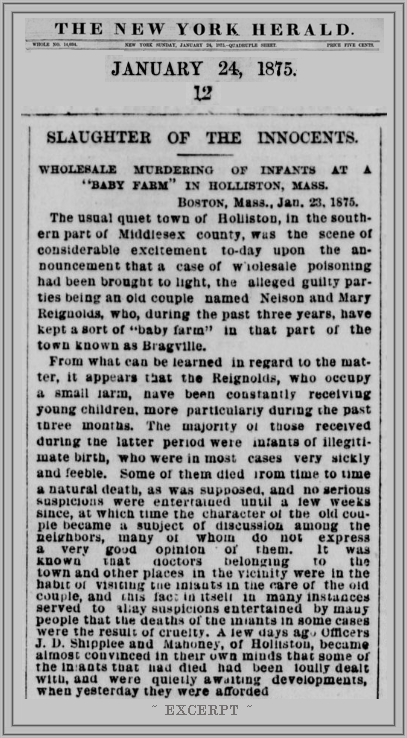 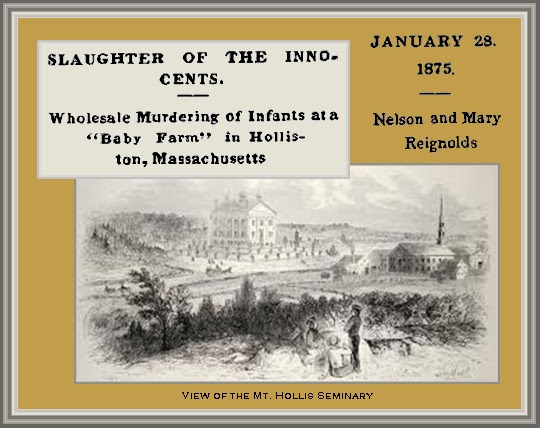