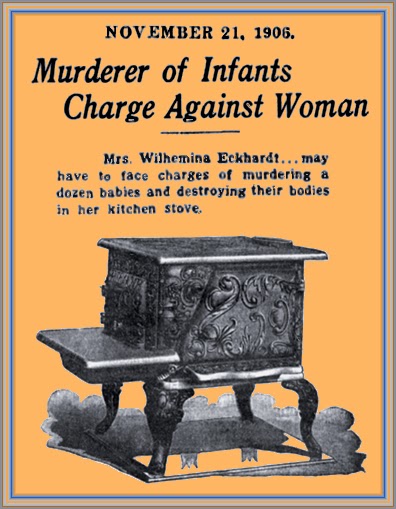 FULL TEXT (Article 1 of 4): New York. – Horrified by the alleged business of their mother, two daughters of Wilhelmena Eckhardt, of 126 East Ninety-third street, are said to have given to the police information which has landed her in the Tombs without bail and the authorities say she may have to face charges of murdering a dozen babies and destroying their bodies in her kitchen stove.

The daughters of Mrs. Eckhardt are Mrs. Wilhelmena Ihrig, of East Ninety-ninth street, and Mrs. Marie Shock, of Worcester, Mass. It is said that they gave a clue to John S. Cooper, attorney for the county medical society, which was followed by Assistant District Attorney Pinchot and led to a raid on the house of the woman by detective and the police.

Affidavits are said to be in the hands of the authorities, made by one of the daughters, charging the mother with destroying children to the number of at least twelve, within the last four months. It is said that the daughters revolted when the old woman wished one of them to engage in the business with her.

Mrs. Eckhardt was arraigned before Magistrate Walsh in the Tombs court yesterday. She denied the charges and declared her daughters had turned against her for reasons other than they gave. Saul J. Dichhauser, her attorney, says the allegations are only the result of bitter family animosities.

[“Murderer of Infants Charge Against Woman – Grave Accusations Against Mother by Her Two Daughters, Who Caused Her Imprisonment in Tombs.” The Washington Times (D.C.), Nov. 21, 1906, p. 8]

FULL TEXT (Article 2 of 4): New York, Nov. 21. – The spectacle of two women denouncing as a murderess the woman who brought them into the world, but whom they refused to call “mother,” was witnessed in the office of the district attorney today. The women are Mrs. Wilhelmina Ihrig of this city, and Mrs. Marie Schoch. The mother whom they accused is Mrs. Wilhelmina Eckhardt, who was arrested yesterday on a charge of having performed an illegal operation.

Both Mrs. Ihrig and Mrs. Schoch asserted that they did not wish to be known as the daughters of Mrs. Eckhardt, who, they said, is not worthy to bear the name “mother.” Both declared they had seen Mrs. Eckhardt kill hour-old infants and dispose of the bodies by burning them in her kitchen stove. They said also that they had seen Mrs. Eckhardt perform criminal operations upon women in her East Ninety-third street home and Mrs. Ihrig declared that her mother had quarrelled with her, because she refused to assist in burning the bodies of babies.

Mrs. Schoch told the district attorney that when she was three days old her mother wrapped her in a bundle of rags and cast her into the street.

She was rescued by her grandmother, who raised her, and with whom she remained until she became a woman. When she came to this country she found her mother conducting a disorderly house and she declared that her mother sought to have her become an inmate of the place. She refused.

The first she knew of her mother's present occupation, she said, was when Mrs. Eckhardt's little adopted son made a discovery in the house which led to the exposures and Mrs. Eckhardt's arrest. When she learned of the discovery made by the little boy, Mrs. Schoch said she went to her mother about it and she declared Mrs. Eckhardt proposed that they go into partnership. This she did, after consulting with a representative of the county medical society, and with a view of causing Mrs. Eckhardt's arrest. It was while occupying this position in her mother's house, she says, that she procured evidence which resulted in Mrs. Eckhardt's arrest. She declared that she i saw her mother perform an operation on Anna Jackson, otherwise Sally Brown, a colored woman, to whom a child was born in the house and her mother told her how easy it was to kill a child and to dispose of it by burning the body in the stove. She declared that “her mother actually did kill the baby by twisting its neck, and that afterward she burned it.

[“Babies And Burned Them - Revolting Occupation Of A New York Woman. Daughters Denounce Mother As Murderess.  - Saw Her At Awful Work - Twisted Necks of Hour Old Infants. - Bodies Then Burned in the Stove.” The Topeka Daily Capital (Ks.), Nov. 22, 1906, p. 2] 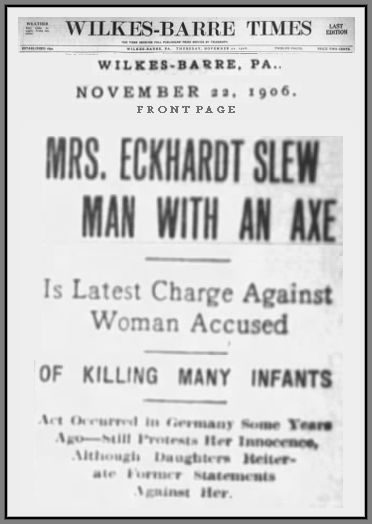 FULL TEXT (Article 3 of 4): New York, Nov. 22. – That Mrs. Wilhemina Eckhart, accused by her own daughter of having snuffed out the lives of many infants and of afterward burning their bodies slew a man in Germany a number of years ago by cleaving jus head with an exe, in the latest charge made against the woman imprisoned in the Tombs on complaint of her eldest daughter, Mrs. Maria Shock.

The murder charge was made before Assistant District Attorney Piachot [?] yesterday by Mrs. Shock while supplementing her previous testimony in the County Medical Society and the district attorney’s office, which had caused her mother’s arrest.

Disowned by both Mrs. Shock and her other daughter. Mrs. Wilhelmina Ihrig, the hawk-faced old midwife loudly protests her innocence of the hideous crimes with which she is accused. Mrs. Eckhardt bears every evidence of unusual physical strength. The hands which are supposed to have strangled scores of babies are large, prehensile and covered with cheap gold and silver rings. Her nose is hooked, her eyes are black and bead-like. She is broad and squat and wears a reddish brown wig.

The district attorney’s office appears so certain of its case against the woman that it is probable that it will immediately be laid before the grand jury, with the intention of having her placed on trial at the December term of court. At the present time it is not believed that the new charge of murder will be preferred against her. The offence was, if at all, committed long ago in Germany, and the investigation mow under way will hardly be concluded before her case goes to trial.

~ A MOST INHUMAN MONSTER. ~

“Mrs. Wilhelmena Earhardt is the most inhuman monster alive,” said her daughter. Mrs. Maria Shock in her statement to the district attorney. “I refused to be known as the daughter of such a woman. She was never a mother to me. But a short time after I was born. In Germany, she wrapped me in rags and threw me in the gutter. I was found by my grandparents and reared.

“I know positively that she has slain babies born to women unfortunate enough to apply to her for assistance.

“She even asked me to go into partnership with her, and told me that there was much money to be made. She boasted to me that she could always successfully make way with a baby’s body. I went to her home on Nov. 18. Two women were then in the house.

“I asked what she did when children were born alive,” and she said:

“That is a question easy to answer. You just give them a twist of the neck and then you burn them up. That prevents any evidence against you!
“She then told me that on the next morning she would start a good fire in the kitchen stove and burn up the body of a baby that lay dead in the room. She said she did not want to start a fire that night. After she was arrested she told me that she had burned the baby’s body and destroyed the ashes, and that the police would not be able to find something.”

The significance of the latter statement of Mrs. Shock was proved when Detective Sergeant Flood, from the district attorney’s office, made a search of the home of the midwife, and reported that had been unable to locate any of the remains of the child victims of the woman. Ehen Flood examined the cellar of the house he found that the floor was concrete.

Testimony as grewsome as that of Mrs. Shock was given the district attorney’s office by her sister, Mrs. Wilhelmena Ihrig.

In her affidavit Mrs. Ihrig says: “I quarreled with my mother because I would not burn children. She burned them in the kitchen stove. There is another woman, Anna Fuerst, who has seen my mother burn babies.”

Mrs. Ihrig also says that she has only been in this country four weeks, and that when she first arrived she went to live with her mother, who desired her to participate in her nefarious occupation. When she refused she was turned out of doors.

When seen in the Tombs Mrs. Eckhardt said: “The charge that I burned twelve babies in my kitchen stove is absolutely false, and I will prove it when I am tried. This whole charge is a conspiracy of my two daughters.”

[“Mrs. Eckhardt Slew Man With An Axe –Is Latest Charge Against Woman Accused – Of Killing Many Infants – Act Occurred in Germany Some Years Ago – Still Protests Her Innocence, Although Daughters Reiterated Former Statements Against Her.” Wilkes-Barre Times (Pa.), Nov. 22, 1906, p. 1]

FULL TEXT (Article 4 of 4): New York. – Wilhelmena Eckhardt, an aged mid-wife, who was arrested a few weeks ago charged with mid-wifery, baby farming, the murder of infants by burning in a stove and several illegal operations, one on her own daughter, was to-day sentenced to two and one half years in the penitentiary. Clemency was asked on account of old age. 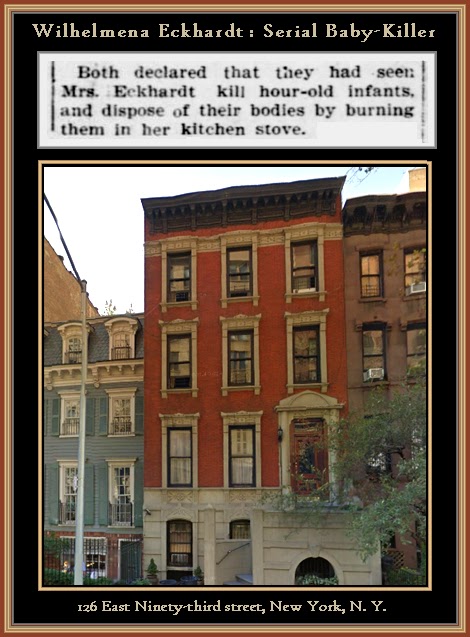