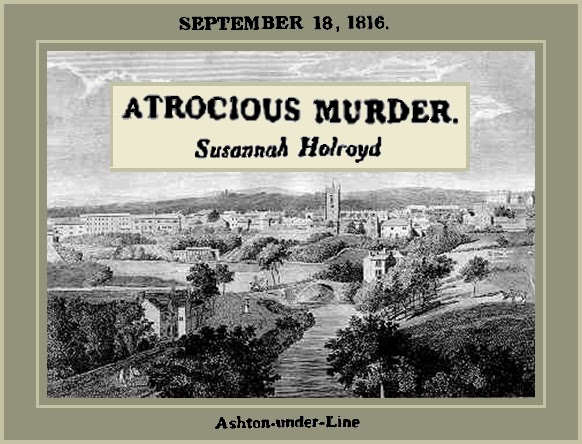 Excerpt from a long article on the case published in 1817:

Susanna Holroyd “had murdered at different times several infants, in the manner as she had lately done her husband and the two other victims of her unprovoked malice.”

THIS is a most shocking case, and shows to what an extent human depravity may be carried. Susannah Holroyd was the wife of a weaver, named Matthew Holroyd, who had the misfortune not to live on good terms with her, though they had three children. She was in the habit of nursing illegitimate children, and at the time of poisoning had one of these in the house, as well as its mother. About a fortnight previous to the horrid deed she had a very extraordinary conversation with this woman, whose name was Mary Newton. She told her that she had had her fortune read, and that in the course of one week, and within the period of the ensuing six weeks, three funerals would go from her door.

She did not delay her destined purpose, however, until the six weeks of the fortune-teller had expired; for in about a month afterwards she went to the shop of a chymist, and purchased an ounce and a half of arsenic, to fulfil the prophecy.

This happened on Saturday, the 13th of April, 1816, being Easter-Eve. Next morning her husband had some coffee for his breakfast, and soon after became ill. The children were likewise affected. To restore them she prepared some water-gruel, and in it she mixed the poison. The wretched man felt that the gruel had an uncommon taste, and at first refused to take it; but she urged him so strongly, by telling him that it was ‘the last gruel she ever would prepare for him,’ that he complied with her entreaties, not knowing the enigma hid under these words.

As he grew worse, she called in a doctor, the better to allay suspicion, and was intrusted by the physician with the remedies to be administered; but she refused to apply them, saying ‘her husband would die.’

The wretched man died on the 18th following, and his son, a boy of eight years old, survived him only six hours, and the child of Mary Newton died the Tuesday following, in great agony.

This wicked woman was now apprehended, and on being brought before a magistrate, made an unreserved confession of her guilt.

Her trial came on at the Lancaster assizes, September the 13th, 1816, when she was found Guilty on the clearest evidence, and the judge pronounced on her the awful sentence of the law, ordering her for execution on the following Monday. She evinced throughout her trial the greatest indifference to her situation; but on hearing her sentence she appeared somewhat affected.

In addition to the horror felt at her crime, there was a pretty general belief that, in her occupation of nursing illegitimate children, she had murdered, at different times, several infants in the same manner that she had taken away the life of her husband and the other two victims of her unprovoked malice.

Tiral [i.e. Trial], execution, and confession of Susannah Holroyd for the barbarous murder of her husband, her own son, 8 years of age, and an infant 15 weeks old; having had connection with another man; who was executed at Lancaster, on Monday the 13th Aug. 1821, giving an account of her behaviour on the scaffold.  [University of Hertfordshire, University of London, University of Sheffield 2017; The John Johnson Cpollection, Bodleian Library, Oxford]