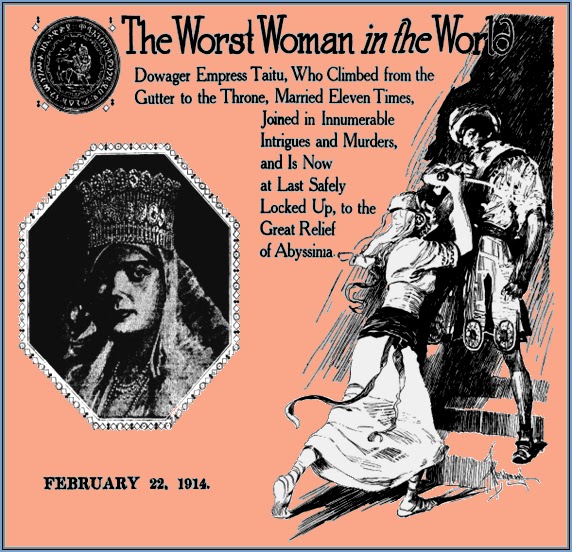 FULL TEXT: Projected sharply across the barbaric glitter and pomp of the crowning of Prince Ladj Yassu, the grandson of Menelik, as the Emperor of Abyssinia, is the sinister shadow of the Dowager Empress Taitu widowed for the eleventh time, who, disappeared after a palace revolution and is now said to be safely sequestered in a “retreat.” Her rise from a slave girl to one of the most powerful barbaric queens in the history of the world is a chronicle red with the blood of murdered husbands and thousands of fighting men who have fallen because of her insatiable greed for power and wealth.

‘Having, occupied the throne with Menelik, descendant of Solomon and The Queen of Sheba, she takes her place beside Semiramis, the greatest Queen of the ancient East; with Theodora, who ruled with the wise Justinian at Byzantium; with Catherine of Russia, and her nearest modern counterpart. Tsi-An, the Dowager Empress of China. Like her, Theodora, Catheine and Tsi-An were of the humblest origin, and the fairy belief that even a beggar maid may become a queen is not entirely a transformation to be realized in antiquity.

She has gone to the throne and to banishment over the bodies of dead men, and it is likely that the grim story will have another chapter written by Death, the servant of this forceful, iron-nerved woman, whose will no reverse, no calamity can shatter.

Trouble is expected from the chiefs, notably her brother, Ras Oly, or Olie of Yejju, and from Dejatch-Selum, Governor of Temblen, son of Ras Mangasha, and grandson of the Emperor Johannes II. It is feared also that Dejatch Areya, a nephew of Johannes, may make a bid for the crown; but it is safe to say that in ell these ambitions the master brain of the Empress will be a directing influence.

Abyssinia with its 8,000,000 population is as big as New England, the middle states, Colorado and Nebraska, and is very fertile. Hedged in by fierce Mohammedan fighting men, the country remained unknown to Europe for nearly a thousand years. And today it to still shut off from the sea by the Italian possession, Eritrea and by British and French Somaliland, a hermit kingdom, a land of mystery, a region of all places in the world today where such a record as that of bloody Taitu could be possible.

She was a beautiful, girl, little Omar’s “cypress—slender minister of wine,” lithe and swift of foot as an antelope and naturally graceful. She has scarcely any negro blood in her veins and her youthful complexion, in her riotous exuberance of life, was as of gold underlaid with rose. Her forehead was broad and well formed, her lips full and sensual, her eyes brilliant and imperious, but capable of the most extreme tenderness.

Her rigorous early life made her a stranger to fatigue, and she was possessed of a soundness of body and acuteness of mind which soon began to shape her pathway to power. She had both the beauty and the menace of a fascinating serpent.

Taitu, to whom the years have brought, with the weight of care, the emphasized burden of flesh, still owes her personal charm to her expressive eyes, her gleaming, firm teeth, and her voice, which she knows how to use with an art which transcends that of the trained women of the west; for this dusky woman’s gift is natural, wholly unschooled and shaped to its unchanging perfection by the incentive that has made her, according to the grisly record of her commentators, the wickedest woman in the world. 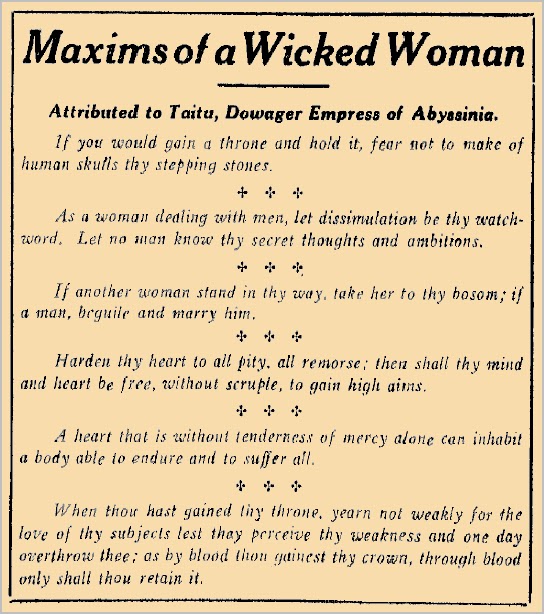 In justice to Taitu allowance should be made for the legends that attach to a person of her eminence around whom is cast, the mantle of secrecy and whose acts have been acts of stealth and furtivity, but this record of her amazing alliances, carefully compiled from existing data, closely embraces her entire tragic life:

1 – RAS ABARA, whose bride she became at the age of 16. She led him into a conspiracy against Emperor Theodore. The plotters were fed to the lions and, as a humiliation of the “cypress-slender” girl, she was given in marriage to—

2—A COMMON SOLDIER, who brutally treated her; making her perform the most menial work. She carried burdens during the march, she was a camp drudge. It is said that she stabbed him in the back during a battle. She then became the wife of—

3—THE CONQUERING GENERAL, a man even more brutal than the common soldier. He repeatedly flogged her, and she finally stabbed him through the heart. She fled, and later on appeared, as a .beggar girl, before the palace of—

4—RAS MOGOLO, a powerful chief, who immediately succumbed—to her charms. It was not long before she was plotting with a neighboring chief, to overthrow her spouse and seize his lands. She arranged that the invaders should enter the house at night. With her assistance they killed her husband Awhile he slept. She then became the wife of—

5—RAS MONTARA, a fierce mountain chief. But intrigue was then, as now, the very life blood of Tuitu, and when the forces of the King of Tigre moved against her husband and besieged him in his mountain stronghold, she offered to assist the enemy on the promise of freedom and wealth. Ethiopian tradition has it that she beheaded Ras Moritara while he knelt in prayer for victory to his arms. She then became the wife of—

6—GEN. TACKEL GHEORGHIS, the head of the besieging army. Then she plotted to seize the kingdom of Tigre, but the plot was discovered, Gen. Gheorghis was executed, and Taitu fled to the province of Egiou She made, her entrance to the capital riding a beautifully caparisoned, milk-white mule. It was an entrancing picture that fascinated—

7—THE GOVERNOR OK EGIOU. This dignitary she led into a conspiracy against Emperor John. The official headsman again made her a widow. The possessor of great wealth, gold and jewels, and with a retinue of servants and guards, she suddenly deckled to enter the convent of Debra Meni. There she remained only for a brief period; then, seeing increased power in increased wealth, she entered wedlock with —

8—THE MONEY LENDER OF GONDOR. It is said that thin good man died showing symptoms of poisoning. Taitu, having the wealth to indulge the most costly desires, built herself a beautiful palace in the province of Shoa, then ruled by Menelik, and married one of his generals named —

9—ABEBA. A conspiracy against Menelik resulted in the prompt decapitation of Gen. Abeba, and his widow soon found solace in becoming the helpmeet of—

10—ZECCARAGAGIAN, an immensely, wealthy Ethiopian. They bitterly disagreed. She left him on the pretence of visiting her mother, taking the greater part of his wealth with her lie died not long afterward.

11—MENELIK, who again met her in 1883, when he was struggling for the establishment of the kingdom she coveted. His home life was unhappy; he did not care for his wife, and spent most of his time with his favorite named Bejana, whom he contemplated marrying. Taitu, hearing of this, brought herself to the attention of Menelik by taming a wild horse in his presence. He sent the less spectacular and strenuous Bejana to a convent and installed Taitu in her place. A year later Taitu was crowned Empress of Abyssinia. 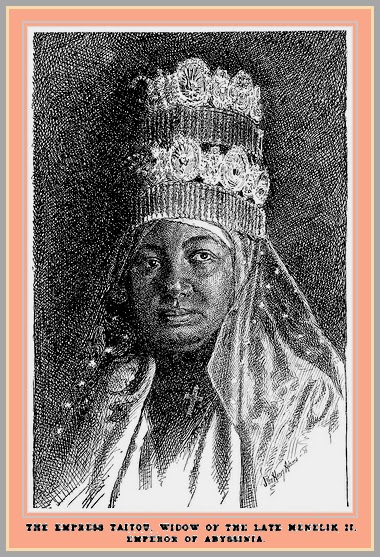 Menelik, who had been reported dead about a dozen times, in said to have finally passed to his fathers on Dec. 12, last; but the belief is strong in many minds that he has been dead for years. All along; it been highly important to Italy to be informed of such an important event as the death of the Negus, and in 1912 a special agent was sent by the government to the Abyssinian capital, Addis Abada, to learn whether Menelik was still alive.

This investigator found that the dusky monarch had died on Dec. 28, 1911, but that the fact had been carefully concealed. A journalist who accompanied him vividly described the "scene of bloodshed” in the palace, in which the prince and chiefs had a mark on the occasion of the king’s death. Prior to December, 1911, dispatches from Abyssinia, spoke of Taitu as “the widowed queen.”

In 1912, while it was reported, that Menelik was not dead—Taitu being most insistent on this point there were strange happenings which supported the suspicion that Menelik was no more. At the Abyssinian New Year celebration, Menelik was supposed to have presided, receiving the diplomatic corps and the great dignitaries of court and the army, but all they saw was a swathed figure, whoso features wore not visible, and who replied to speeches by signs and gestures.

Dr. Steinkuhler, a, specialist, of also, who treated Menelik four years ago, declares the Empress did all in her power to keep him alive, but at the same time to render him weak and ill, for in that way only would she hold the reins of power.

She showed great capacity for ruling during this period, when she was deposed Menelik named his grandson as his successor.

The Empress’s maxims of might and murder are quoted to show the terrible fibre of which she is made. If they are barren of one gracious, human touch it is because this woman professing the cross, is a reversion to the monstrously cruel days of human prowess when might was the only gospel and the universal message of love had not been spoken to the world.

If you would gain a throne and hold it, fear not to make of human skulls thy stepping stones.

As a woman dealing with men, let dissimulation be thy watch-word. Let no man know thy secret thoughts and ambitions.

If another woman stand in thy way, take her to thy bosom; if a man, beguile and marry him.

Harden thy heart to all pity, all remorse; then shall thy mind and heart be free, without scruple, to gain high aims.

A heart that is without tenderness of mercy alone can inhabit a body able to endure and to suffer all.

When thou hast gained thy throne, yearn not weakly for the love of thy subjects lest they perceive thy weakness and one day overthrow thee; as by blood thou gainest thy crown, through blood only shall thou retain it.

[“The Worst Woman In the World – Dowager Empress Taitu, Who Climbed from the Gutter to the Throne, Married Eleven Times, Joined in Innumerable Intrigues and Murders, and Is Now at Last Safely Locked Up, to the Great Relief of Abyssinia,” Indianapolis Star Magazine Section (In.), Feb. 22, 1914, p. 1]

Note: The same information, for the most part, can be found in a 1910 Washington Post article: “Won Sheba’s Throne On Her Husbands’ Heads,” The Washington Post (D. C.),  from Washington, District of Columbia ) Magazine Section, Aug. 28, 1910, Page 2 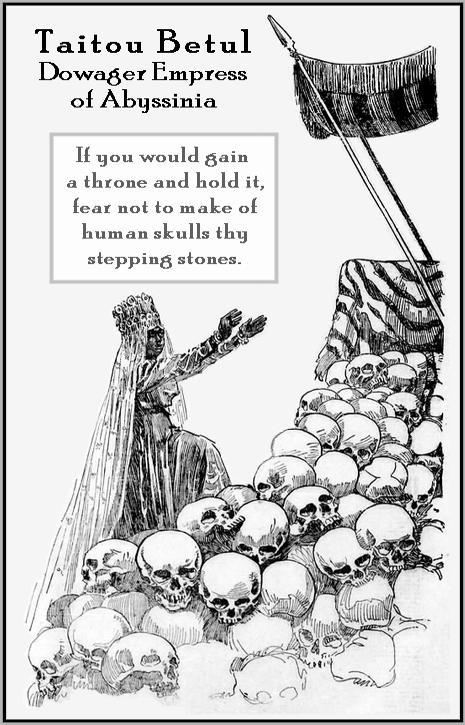 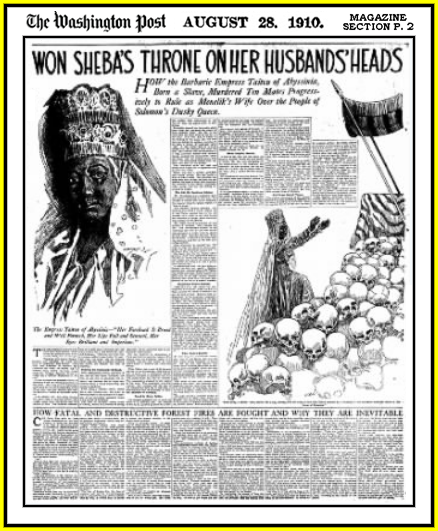 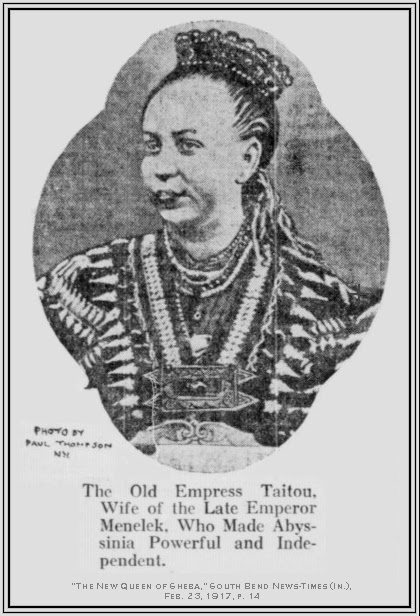 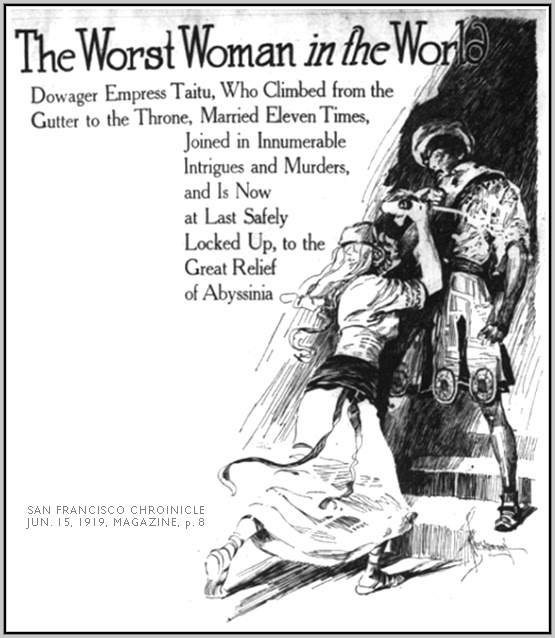 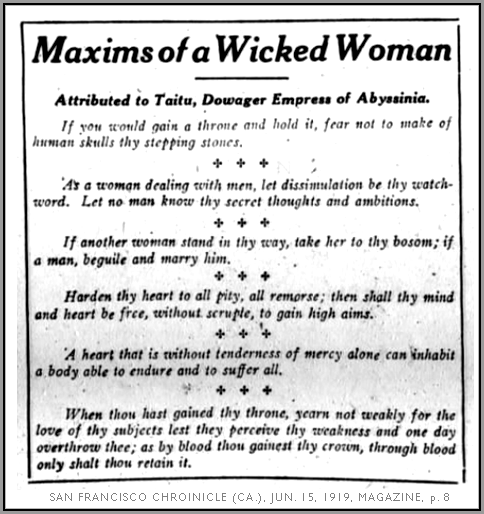 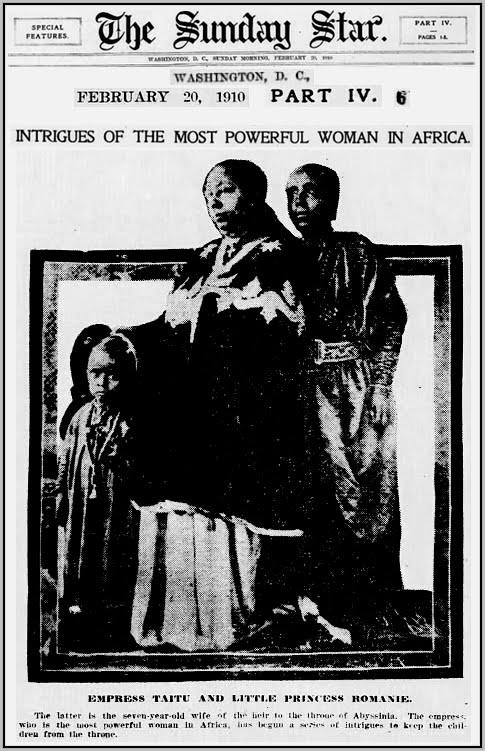 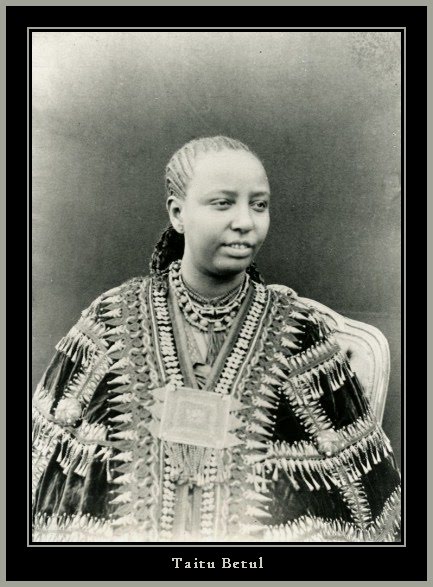 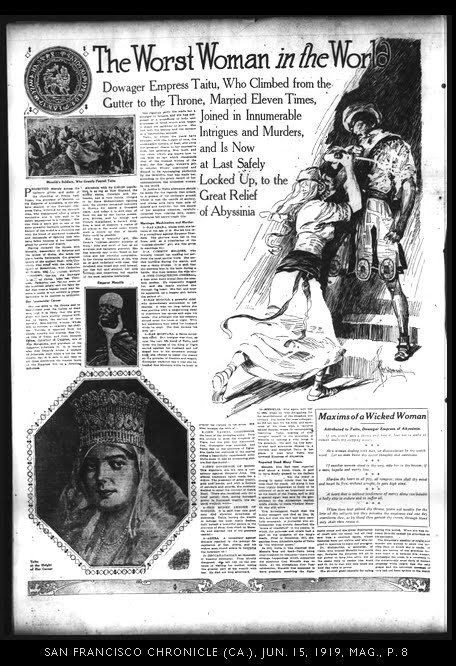 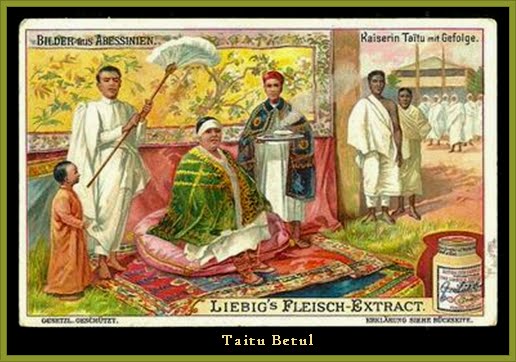