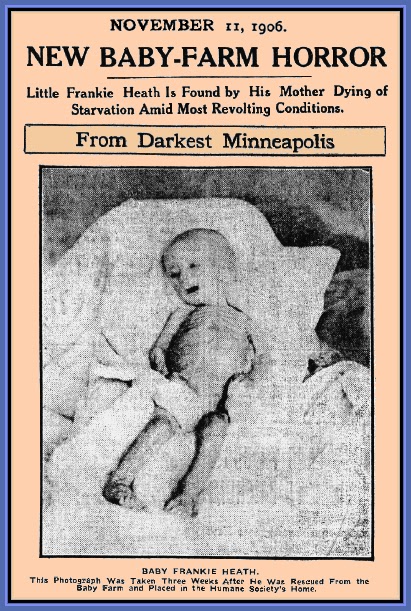 PHOTO CAPTION: Baby Frankie Heath. – This Photograph Was taken Three Weeks After He Was Rescued From the Baby Farm and Placed in the Humane Society’s Home.

FULL TEXT: Starving to death on a diet of sour milk in a South Minneapolis baby farm, S. Frankie Heath, aged 6 months, has been rescued by his mother from the woman who keeps the place.

Wasted as he appears in the accompanying picture, which shows him after three weeks’ care and nursing in the Humane society’s detention home, the society workers say that he is robust compared with what he was when he first came to them.

“Plain starvation” is the diagnosis of the case made by Dr. J. P. Sedgwick, the home’s physician.

When Baby Heath was placed in the baby farm, a little over two months ago, he was, according to the statement of the mother, in good health. Two months later, when she brought him to Mrs. Lenora Bacon, the nurse at the detention home, he was emaciated as one of the Hindu famine babies or one of the little reconcentratos in Cuba under Weyller.

In the three weeks that Baby Heath has been fn the care of the Humane society, the doctor and nurse have fought night and-day for his life. He is now recovering from the awful privations to which he was subjected, and will probably develop into a healthy boy. Neglect, insufficient and improper food, and unsanitary conditions are what brought him to his present pitiful condition.

For $2.50 a week the woman who runs the farm agreed to feed, lodge and care for Baby Heath. His mother is alone in the world and it obliged to work at hours which make it impossible for her to care for him. At first she paid frequent visits to the child and all seemed well. Then sickness came and she was unable to visit her child. After a protracted illness, Mrs. Heath went to her child and was horrified to note his condition. At first she supposed it was disease which had stripped the flesh from the tiny frame and replaced the dimples of her darling with the hideous wrinkles of famine. At last, growing more, and more suspicious of the woman who had the care of her child, she took it from her and brought it to the detention home 628 East Sixteenth street. It was in the nick of time. Another week and the child would have died.

As soon as the case came to the attention of the Humane society, a worker was dispatched to the baby farm. She entered the place at 5 p.m. and found the most revolting conditions. The soiled linen of the unmade beds tainted the air of an unventilated room. The babies were unkempt and unclean. The proprietor of the den was a gaunt woman with no suggestion of motherly tenderness in her face or bearing. There was no sign that she took the slightest interest in the health or comfort of the helpless infants at her mercy.

Three babies have died in this sinkhole this fall, according to Humane society reports. The woman, holds a license to board six babies and is supposed to be under health department supervision. The case has been reported to the department and the promise has been given that the license will be revoked, if an investigation shows improper conditions.

But Baby Heath is safely away and will grow to manhood, perhaps with a constitution undermined by his slow starvation, but oblivious of the ordeal of suffering thru which he has passed. 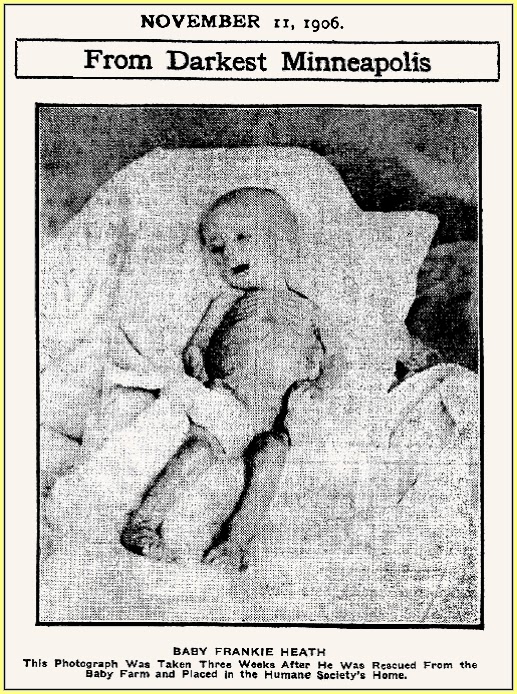