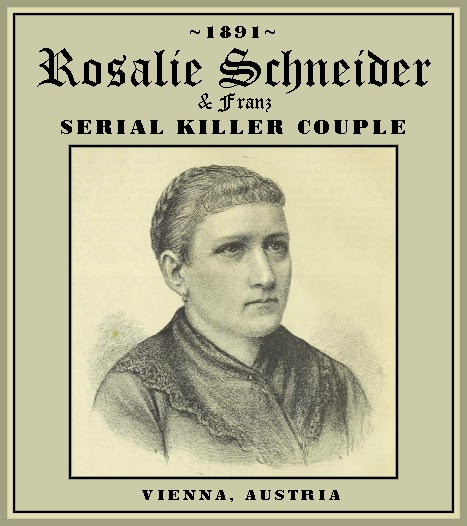 FULL TEXT (Article 1 of 4): Vienna, August 12. – The woman Schneider, who was arrested with her husband for decoying and murdering servant girls, attempted to commit suicide. Her recovery is hopeless. [Note: She did, in fact, recover, and go on trial.]

FULL TEXT (Article 2 of 4): Vienna, August 18. – Six hundred gendarmes and foresters, with bloodhounds, are searching the woods for the victims of the man and woman Schneider, in custody on a charge of murdering servant girls, in five days they succeeded in finding the bodies of three of the missing girls, and in consequence of the discoveries sensation is growing.

FULL TEXT (Article 3 of 4): Vienna, Jan. 29.— The sensational Schneider murder trial was ended to-day. The defence, if defence it can be called, where the accused go on the stand and by their evidence corroborate the testimony of the prosecution, closed this morning, and the case was given to the jury. The jurors required only twenty minutes to find Schneider guilty of all the murders charged against him, and a verdict of guilty against Frau Schneider for the murder of Vincanzia Zouffer.

The judge immediately sentenced both prisoners to death. Both executions will take place on the same day, but Frau Schneider will be executed first.

For cold-blooded cruelty this case stands almost without parallel in the annals of crime in this city. It came to the knowledge of the authorities after a long and patient investigation that a large number of girls had been employed by Franz Schneider and his wife Rosalie, and that after they had been at work for a short time they would disappear and never he heard of again. The trial of the Schneiders has been proceeding for several days, and for brutal and sensational developments it stands without comparison here. It was shown that the prisoners, on the pretext of employing the girls, had enticed thorn to their home. Once there their fate was sealed. The evidence against the accused was overwhelming.

Schneider broke down completely and confessed his guilt. He described in detail his method of doing away with the unfortunate girls who fell into his power. He would go to the room occupied by the girl last employed by his wife, and despite her prayers and entreaties would assault her. Horrible as it may appear, his wife accompanied him and aided him. She would grasp the hands of the victim while Schneider clutched the poor girl by the throat and choked her to death. After the girls were dead Schneider and his wife would convey the bodies to a wood close to their home, where they would strip their victims of their clothing, which, together with the contents of the girls’ luggage, they would afterwards sell.

The case has excited the most intense interest in Vienna, and on every day of the trial the courtroom has boon packed with an audience eager to hear every detail of the revolting testimony. The condemned man and woman have no sympathizers, and the opinion is everywhere expressed that they have met the fate they deserve.

~ LADIES WITH A MORBID CURIOSITY. ~

A peculiarity of the crowd which frequented the court-room was that it was not composed entirely of men, as in usually the case in murder trials here, where women, unless they are witnesses or connections of prisoners, do not attend such trials, The Schneider’s trial, however, has been marked by the presence of a very large number of stylishly dressed ladies, who levelled their lorgnettes and closely scanned the features of the prisoners whenever the opportunity offered. Some of the evidence was of a nature to bring a blush to almost any cheek, but these ladies, though some of them did blush at certain parts of the testimony, were so eager to hear every word about the crimes that they conquered their natural inclinations to leave the court-room, and gaining courage from the many women present, they remained and had their curiosity gratified to the fullest extent.

The Public Prosecutor’s arraignment was terrible, but the pair listened to it and also to their death sentences with indifference.

~ LAUGHTER FROM THE .SPECTATORS. ~

There was a change of front, however, while their counsel was pleading for them. At the conclusion of the lawyer’s speech Schneider broke down completely. He buried his face in his hands, sobbed aloud, and in a voice broken with emotion exclaimed, “My wife led me on she planned it all.”

These words sobbed out by the prisoner, who is a large and very powerful man, struck those in the court-room as very comical, and there was a burst of general laughter throughout the crowd. His evident distress only provoked sarcastic remarks and great merriment.

Counsel’s words also affected the woman, and she suddenly burst into a flood of tears. This weeping gained her as little sympathy from the spectators as did the sobbing of her husband. Even the large number of women present in the court room showed their detestation of her by loud and continued hissing. The wretched woman broke down completely at this pronounced exhibition of ill will by even those of her own sex and the scene was truly painful. She seemed to fear that the spectators might go still further and offer her personal violence, for she turned her back upon the scowling crowd massed behind her and cowered down with every mark of the most abject terror.

During the interval in the proceedings, when a recess was taken for luncheon, not one of the large number of spectators left the court-room. The spectators had all taken the precaution to provide themselves with refreshments. The large crowd was in a jovial mood all the time. Jokes and badinage flow thick and fast, and there was a scene of general merriment.

The return of the Schneiders aroused the ire of what but a moment before had been a jolly crowd, for no sooner had the prisoners entered the room than a storm of hisses broke out and was continual until the presiding judge rapped loudly with his gravel. The woman had regained her composure during the time she was absent from the court room, and she now faced the unfriendly crowd, without flinching. Her husband, however, was then roughly terrorised, and showed it.

In connection with this it may be mentioned that the hanging of Frau Schneider will be the first execution of a woman in this country since the year 1808, owing to imperial repugnance to capital punishment in the case of female offenders.

FULL TEXT (Article 4 of 4): London, March 17. — Schneider, who, with his wife, was recently sentenced to death in Vienna for the murder of several servant girls, has been executed. His wife, Rosalie Schneider, was reprieved by the Emperor. 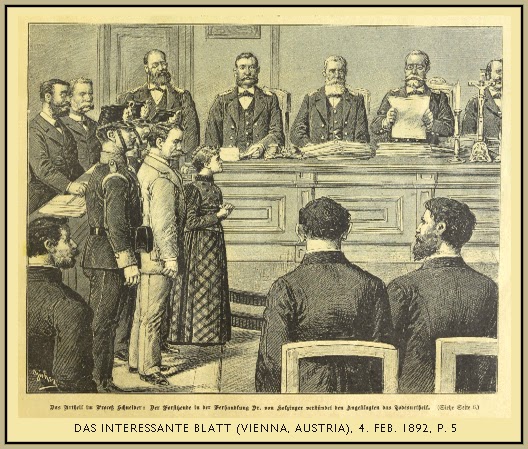 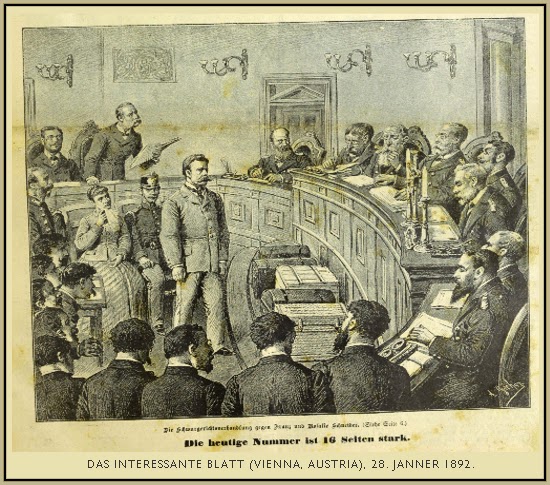 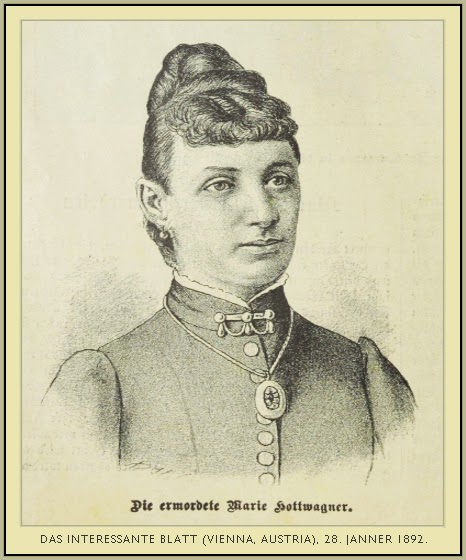 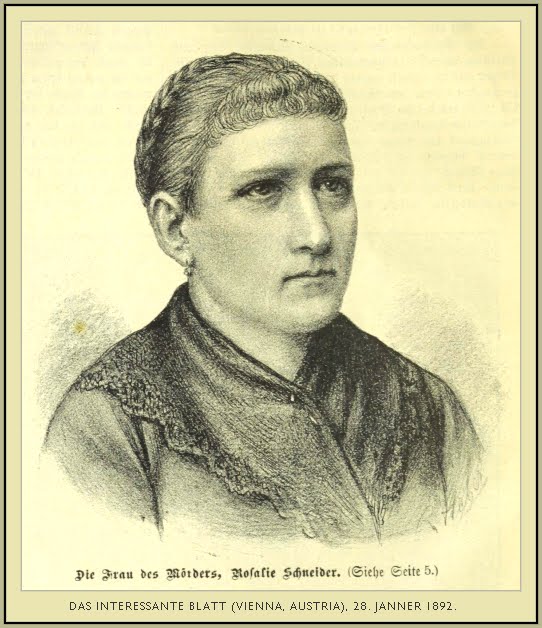 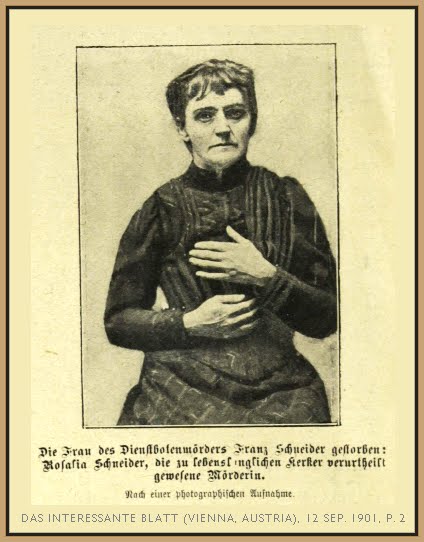 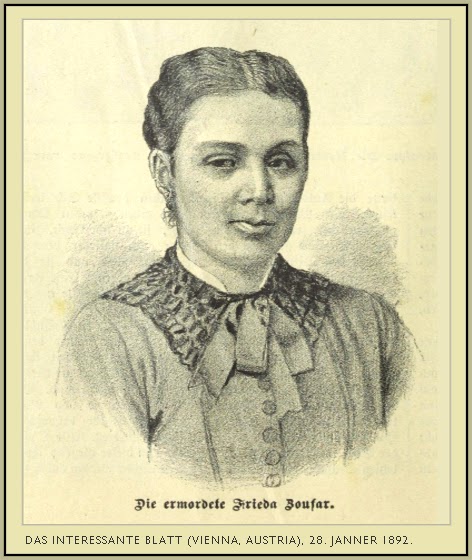 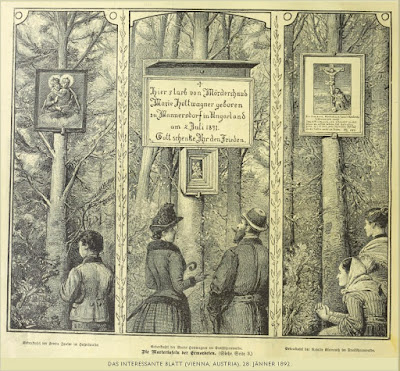 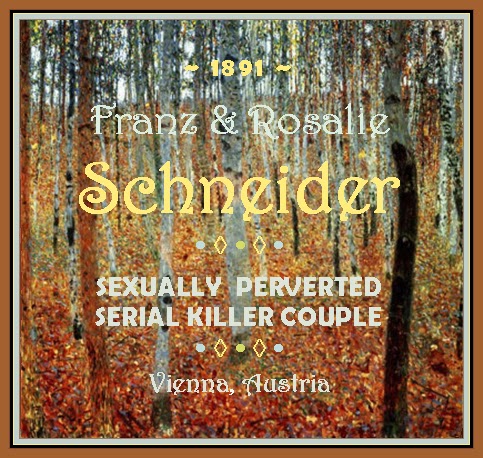