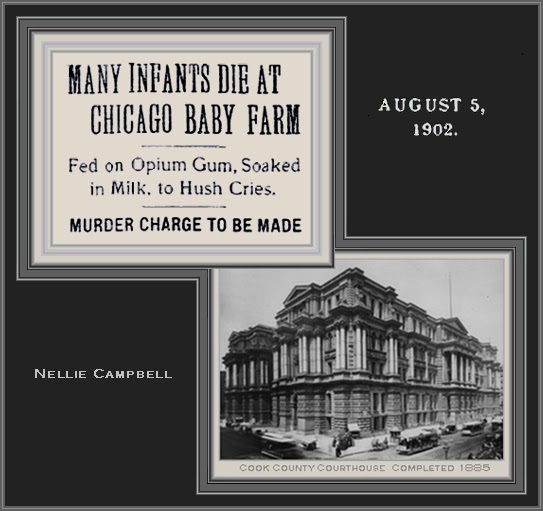 FULL TEXT: Chicago – When the police preparing to lodge a charge of murder against her in connection with the death last Thursday of a child which had been taken from a midwifes home, and a daughter a child in years piling up numerous tales against her, Mrs. Nellie Campbell proclaims her innocence of any wrong.

She admits the fatality which followed her alleged offspring, but tear fully declares that she always gave them the most careful attention and vows that she should not be held to account for their taking off.

~ Death Due to Starvation. ~

Eight babies in Mrs. Campbell’s care have passed away. In the last instance the coroner alleges death was due to starvation. This the woman denies as she does the charge by her  that she fed the little ones who died months ago bits of opium gum soaked in milk to stifle their cries. The list of little ones now resting in their graves is as follows:

Of this list Mrs. Campbell now confesses that two were not her own, and there is yet another child a named Indola, one year old, who is in the care of St. Vincent’s Orphan Asylum. This babe was taken at the same time as Esther and her twin sister. The other one that is admitted to have been adopted is the infant Louisa who died last Thursday.

“I grieved so much over my misfortune with my babies and Frank’s death particularly,” said Mrs. Campbell, “that I went to a midwife Mrs. Harrech, who lives in Carroll Avenue, and she got me the twins, Esther and Indola I called them. No, my husband did not know that I adopted them; he thought they were ours until a short while ago.”

Mrs. Campbell admitted that she used gum opium to quiet but said she had never given it to the children. She would not admit drinking to excess.

Quite another story is that which Viola held captive at the Harrison Street annex unfolds Viola is a black eyed child with an old woman’s head on her narrow little shoulders. The girl adds that there is another child born in California not accounted for in the list.

There was no profit for Mrs. Campbell in handling the three children she admits having secured from others. On the contrary, she paid for them and the husband paid for the funerals until he heard the story regarding the last one, Thursday, and told the undertaker he would settle no more funeral expenses.

[“Many Infants Die At Chicago Baby Farm - Fed on Opium Gum Soaked in Milk to Hush Cries - Murder Charge To Be Made - Police Making Rigid Investigation and Ugly Developments Expected Against the Woman Manager Who Protests There Has Been No Wrongdoing.” The Evening Times (Washington, D.C.), Aug. 5, 1902, p. 5] 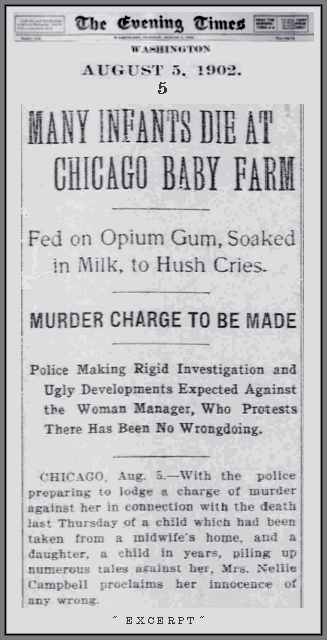