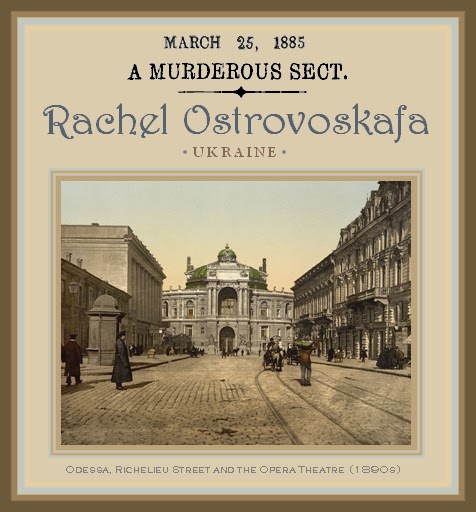 FULL TEXT: An Odessa correspondent writes under date of December 31 :— A case tried yesterday before the Criminal Tribunal of this city has brought to light some further proofs of the diabolical tenets held by a secretly organised and fanatical Russian sect, against which several prosecutions have from time to time been instituted. Some account of this sect, whose members, so far as the prosecutions have been able to elicit, appear to consist entirely of women, appeared in your columns some time ago.

These female fanatics, or rather female thugs, have become infamous under the denomination of ‘Angelmakers.’ They secretly destroy the children, generally infants at the breast, committed to their charge. As nurses generally, and more frequently as caretakers of illegitimate children, they destroy their charges in any manner which promises the safest means against detection, but preferably by strangulation and secretion of the corpses in the case of illegitimate children whose disappearance is not likely to arouse suspicion.

They profess their mission is to murder for the assured salvation of the souls of their innocent victims, and at the same time to earn for themselves eternal glory. It is difficult, however, to obtain any exact account of the origin and organisation of this sect, whose members, it would appear, were under some vow of secrecy. The prisoner tried yesterday was charged under the name of Rachel Ostrovoskafa, but is known to the police by several aliases. She is a married woman, 28 years of age; one of her known victims being her own and only child.

Three cases of child murder, one by strangulation, were proved against the prisoner, who was too leniently condemned to 15 years’ hard labour. The woman appeared unaffected, and when called upon by the judge, replied simply, and with the utmost composure, “Do with me what you will; I am in your hands.” 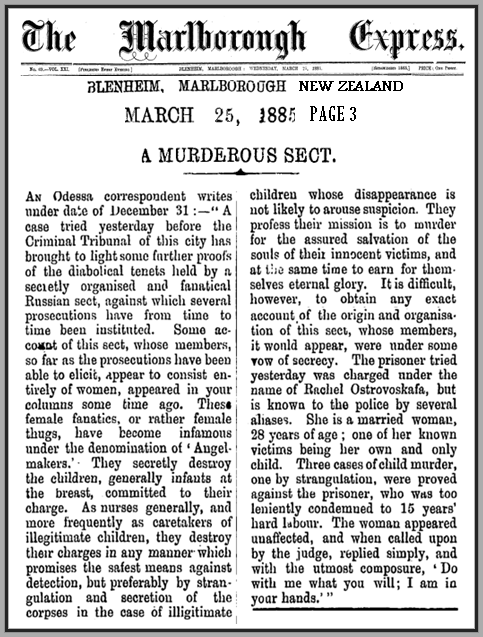