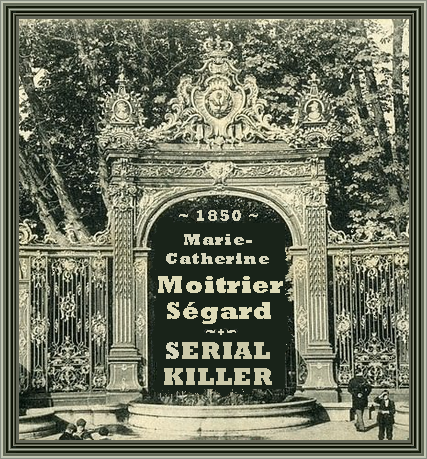 FULL TEXT (Article 1 of 3): A woman, named Segard, who has committed numerous robberies and forgeries in France, was lately apprehended for having robbed a portrait painter. The investigation respecting the robberies led to the discovery that she had poisoned two husbands and four children; and though affectedly pious, had led a life of scandalous immorality. She was condemned to death.

FULL TEXT (Article 2 of 3): A woman named Segard was guillotined at Nancy on the 8th, for having poisoned her husband and three children. 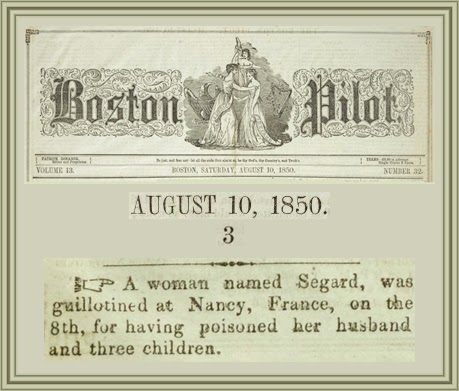 FULL TEXT (Article 3 of 3): The Court of Assizes of the department of the Meurthtried, a few days ago, a woman, named Segard, of charges of robbery, forgery, and murder. She had lived at Vacqueville and Nancy, where she had carried on the embroidery business, but had stolen and sold a vast number of articles intrusted to her. She had also perpetrated numerous robberies in shops, and in the houses of private persons. She had, moreover, committed a vast number of forgeries of bills of exchange in the name of a woman, named Henry, with whom she was connected in business. Some of these bills were paid by her, and others were protested. At length her acts of dishonor brought her into such disrepute and danger that she was obliged to quit the department, and seek refuge at Paris.

There she entered the service of a portrait painter, named Chabut, but after a few days ran away, taking with her different articles of clothing and numerous daguerreotype plates. These things she sold for sums much below their value. A complaint was laid before the police, and she was arrested. An investigation having been made into the charges against her at Nancy, proofs of different robberies, and of not fewer than seventeen forgeries, were soon obtained. It was in the course of the investigation that the more serious crime of murder was discovered. It appeared that in 1842 her first husband, named Marchal, died, leaving a fortune of between 6,000f. and 7,000f., one-fourth of which he directed should go to her, and the remainder to their daughter Florine.

About this time, it is supposed, she resolved to get rid of the poor child, in order to come into possession of all the money; and it was specially noticed that she stated to several persons that an eminent physician of the neighbourhood had assured her that her daughter, notwithstanding her apparent good health, would not live long; whereas the physician never said anything of the kind. A few months after Marchal’s death she married Segard, and had by him two children, Arsène and Constant. Her conduct was scandalously immoral, and led to frequent violent dissensions with her husband; and eventually she took a profound antipathy against him. On the 27th of February, 1848, her daughter Florine died; on the 18th of March her son Arsène died; on the 28th of the same month Constant, and on the 2nd of May her husband also died.

All four were taken ill in the same way. with violent vomitings, dreadful pains in the bowels, and other symptoms of poisoning. The children expired after a few days’ suffering; the husband lingered for three weeks. She called m medical men to her children, but took care to keep them in the dark as to the nature of the malady.

When her husband first became ill she also sent for a doctor, but that gentleman having expressed himself in terms which led her to believe that he suspected foul play, she would not allow him or any other medical man to be again summoned. Before the unfortunate man took to his bed she managed to persuade him, by demonstrations of pretended affection, to make a will in her favour.

When he died she displayed most unseemly joy—even the gravedigger, who attended the funeral repast, was shocked at it. “I have been,” he said naievely, “to a great many funeral repasts, but never saw one so merry.”

The bodies of the deceased were dug up, and chemical analysis demonstrated that poison existed in the bowels of each. After the reading of the indictment the prisoner replied to the interrogatories put to her with perfect calmness and great lucidity. She pretended that she was totally unable to state the cause of the deaths of her husband and children. The whole of the evidence clearly brought home to her the different charges of robbery, forgery, and poisoning by means of arsenic. It was further proved that during her married and widowed life she had been guilty of most licentious conduct. A notary’s clerk stated that during her widowhood he, though a perfect stranger, having, in a call he had made on business, jokingly observed that he would rather pass the night with her than go home in the rain, she at once invited him to stay, which he did. Notwithstanding all this, she pretended to be piously inclined,” and when in prison awaiting her trial she wrote to the magistrates to request the counsels of a confessor, that,” as she expressed it, “she might not lose her immortal soul, as well as her honour.” With respect to the accusations of having robbed the portrait painter, she created some indignation were also exited by the proof  that she had herself written and caused epitaphs to be placed on the graves of her victims: –

“Here lies the body of Anne Marie Florine Marchal, who died the 28th of February, 1848, aged eight years. This child, notwithstanding her tender years, displayed rare qualities of mind; her obedience and modesty caused her death to be deeply regretted by her mother, who has erected this monument to her memory.”

“Here lies the body of Jean-Baptiste Segard, aged thirty-seven. He was a good husband, an affectionate father, and a Christian devoted to the poor. To her dear and virtuous husband his grateful wife erects this monument. May he repose in peace.”

After hearing counsel for the prosecution and the defence, and the able summing up of the judge, the jury returned a verdict of guilty, and the court condemned the woman to death.. She heard the verdict and sentence unmoved, and walked away with a firm step – she was, indeed  the only person in the court who was not labouring under profound emotion. During the whole trial also she displayed extraordinary self-possession. She is represented to be rather pretty, with a mild expression. 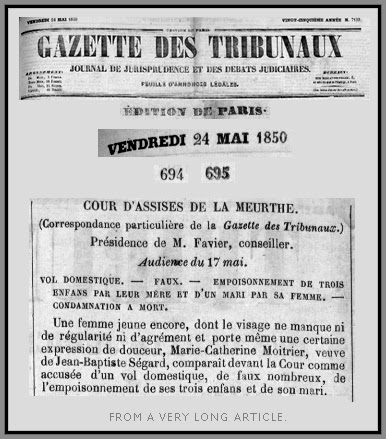 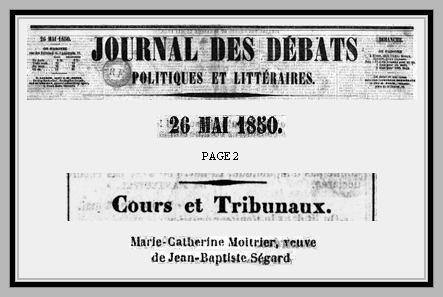 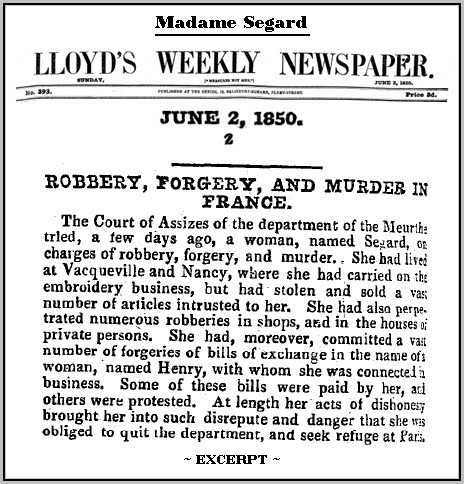 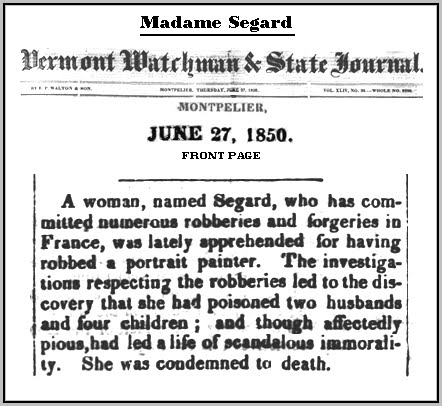 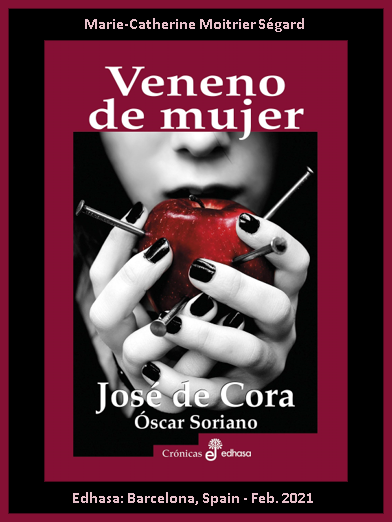