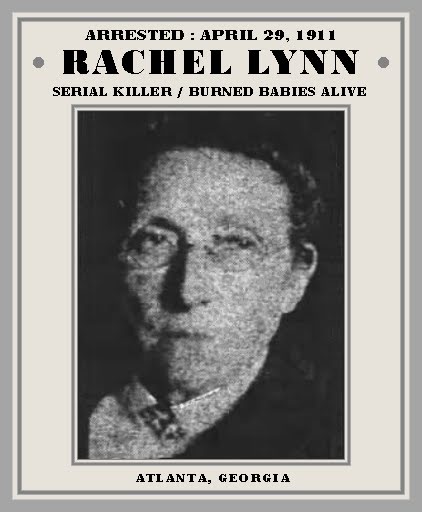 FULL TEXT (Article 1 of 4): Atlanta, April 29. – Suspicion that criminal operations and infant murders had taken place there led to a police raid upon the home of Mrs. “Doctor” Rachel Lynn, spiritualist and midwife, in a fashionable section of Atlanta, and the arrest of Mrs. Lynn and two of her negro servants.

Chief of Detectives Lanford said the charges against Mrs. Lynn were based upon information furnished him by the two women held as witnesses, whose names are withheld. One of them told him, he said, of a conversation she had while in the house with a negro maid in which the latter said that “every grate in the house had contained the ashes of a dead baby.” 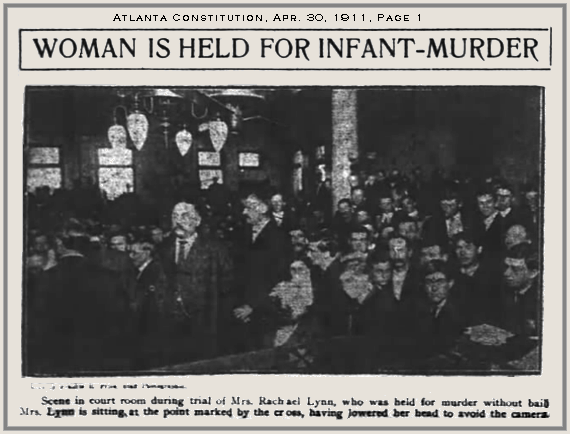 FULL TEXT (Article 2 of 4): Atlanta, Ga., April 29. – Charged with the wholesale murder of infants. Mrs. Rachel Lynn, a Spiritualist medium, was placed under arrest at her beautiful home in the fashionable residence district of Atlanta.

Two negro women servants are held as accessories after the fact, and her grandson. Charles Flynn, a boy, and two young white women are held as witnesses. Chief of Detectives Lanford charges that Mrs. Lynn used fiendish cunning in killing the babes by strangling them to death with cords, by piercing their heads with sharp iron instruments and burning them alive in red hot stoves and grates.

The case originated with the finding of a tiny baby burled in the soft earth near tho rail read tracks at the foot of Gordon street. It developed that the child had been strangled a baby hours after its birth, by a tiny silken cord which was still around its neck when a dog made the grewsome find.

EXCERPT (Article 3 of 4): One thousand white men and white youth, with apparently nothing else to do, crowded into the recorder’s courtroom yesterday morning to witness the trial of Mrs. Rachel Lynn, who is held on the charge of putting to death young babes that were either born at her home, 605 Washington street, or carried there by outside persons.

FULL TEXT (Article 4 of 4): On the charge of murder, without bail. Recorder Broyles yesterday morning committed to the tower Mrs. Rachel Lynn, the elderly white woman whom the city detectives charge with conducting at 605 Washington street a place where women were housed and premature infants destroyed. There were only two witnesses placed on the stand by the prosecution and none for the defense.

One of the city’s witnesses was Mrs. J. S. Bratton, who had been living with Mrs. Lynn for the past three months, and who testified that the old woman had produced abortion twice on a young woman by the name of Hawkins.

The other witness for the city was Walter Taylor, clerk of council, who testified that Mrs. Lynn had no license for conducting a hospital or sanitarium. The defense introduced no evidence at all, Mrs. Lynn declining to make a statement.

The recorder’s court room was packed to its utmost seating and standing capacity, and there were at least fifteen hundred white men and youths and two hundred negroes present. There was only one white woman in the audience and she occupied a back seat An effort was made by the court officers to keep the crowd out of the passageways, but this soon proved futile and the spectators swarmed all over the court room, even filling the rostrum around the recorder. Mrs. Lynn was given a seat, while at her side stood her attorneys, Harvey Hill and John W. Cox, and her young kinsman, Charlie Lynn. When the old woman saw the camera of The Constitution’s staff photographer leveled at her from behind the recorder’s chair, she ducked her head so as to hide her face under the brim of her broad hat. and from the beginning of the case to the close she never once looked up. When the flashlight of the crowd in the court room was taken she still had her head down. 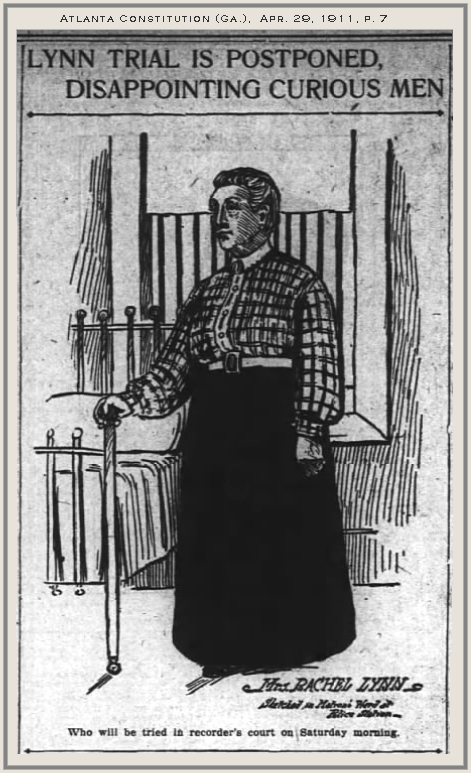 ~ Cameras Made Her Nervous. ~

Mrs. Bratton, the leading witness, excused herself for talking too low by saying The Constitution’s camera made her nervous. She got even with the camera by alluding to the newspaper men as a “lot of insignificant reporters.”

The city was represented by Attorney James L. Mayson and W. D. Ellis, Jr, who decided that the testimony of Mrs. Bratton would be sufficient for the prosecution to make, out a prima facie case. Ail the other witnesses were put under the rule and made to leave the court room, but none of them was ever recalled. Mrs. Bratton took the stand and in reply to questions by the city attorneys, made a statement, of which only a synopsis is here given, as the details were of such a nature as to preclude them being published.

“I visited Mrs. Lynn’s residence with a young woman named Hawkins when Mrs. Lynn lived on King street,” stated Mrs. Bratton. “A man went with us by the name of Boone, who showed us the place. Mrs. Lynn agreed to perform a criminal operation on Miss Hawkins for $25, and she did so. Three days later Miss Hawkins and I returned to the place and the operation was repeated. A few days later Miss Hawkins, who was living with me at 165 Washington street, became critically ill and she was taken to a sanitarium.

A physician had to perform an operation, the result of which was the child was born dead. The physicians said it had been dead a day and night. Two years after that time Miss Hawkins went to Mrs. Lynn at 605 Washington street and I went with her, not knowing who Mrs. Lynn was. That was about three months ago. Miss Hawkins’ child was born there and is living.

“On more than one occasion I have seen young women go into rooms with Mrs. Lynn, who locked the door I have heard terrible screams and on one occasion I heard a young woman begging for a doctor and her mother. It was a frequent thing for women to visit the house.” 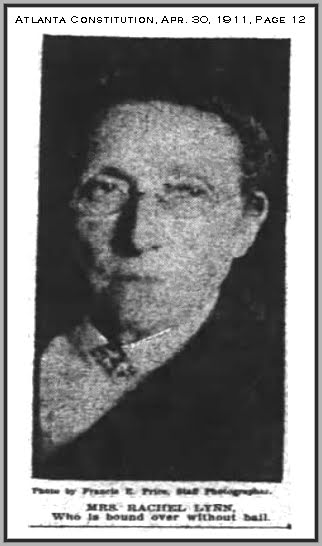 Questions in regard to what negro women had told Mrs. Bratton about the bodies of infants being burned in a stove were ruled out.

On the cross-examination, Mrs. Bratton said that she was not a trained nurse, but took cases when called upon to do so by physicians. She said, when asked why she lived three months with such a woman as Mrs. Lynn and why she had not reported the house to the police:

“There were several nice people boarding with Mrs. Lynn, including married couples. I did not think it my business to report Mrs. Lynn when everybody seemed to know what was going on in her house, as it was generally known in the neighborhood.”

Mrs. Bratton said that she had never seen any infant killed or burned. She admitted that her husband had run away with another woman. She also admitted that she owed Mrs. Lynn $39 board. When asked the pointed question if her own reputation was not bad, she struck the recorder’s desk with per fist and exclaimed very warmly:

Council Clerk Walter Taylor, when asked if Mrs. Lynn had any license for conducting a sanitarium or hospital, replied that she did not.

The attorneys for the defense announced that they had no evidence to offer. They contended that there had been no evidence to show that Mrs. Lynn should be held for murder, and they asked that she be allowed to give bail.

“The woman is very old,” stated Attorney Hill, “and her husband, who is also very old, is now ill at home.”

The city’s attorneys stated that a prima facie case of murder had been made out and the recorder agreed with them.

Mrs. Lynn will remain in jail until the grand jury acts on her case. The city detectives claim that they have a great deal more evidence, but did not think it would be necessary or wise to let It all come out in the recorder’s court.

The recorder dismissed the cases against Lula Lowe and Mary Jacobs, the two negro women who worked for Mrs. Lynn it is understood they will be summoned as witnesses before the grand jury. 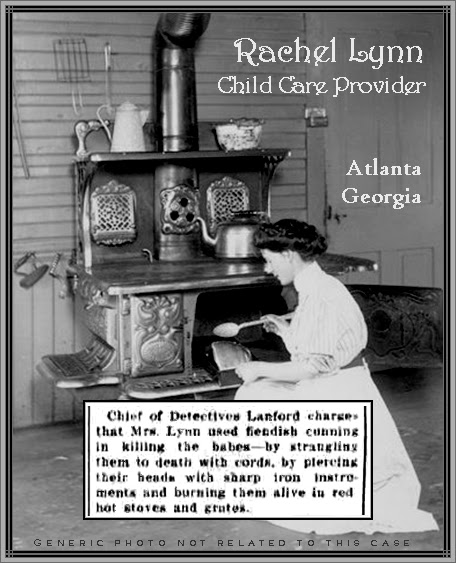