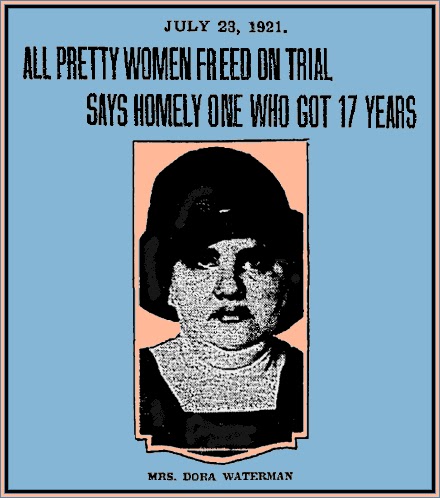 She has just been sentenced to 17 years in the penitentiary for killing her husband.

“Had I been good looking, had I worn silk hose and shown my calves while I was in the witness chair, the jury would have freed me.”*

The foreman of the jury said Mrs. Waterman’s appearances had nothing to do with the verdict. But Mrs. Waterman says it did.

“If I had only been pretty,” she exclaimed allowed in the room after the verdict was read.

Thirty-one women, young and beautiful, have been acquitted by juries here on charges of having murdered husbands, sweethearts or friends.

Mrs. Waterman hacked her husband to pieces with a hatchet.


*SEE: The 1919 Betty Inch blackmailing case, internationally famous for the defendant’s deployment of showing off her ankles as a chivalry justice tactic.

FULL TEXT: Hilda Exlund, of Chicago, has been convicted of killing her husband and sentenced to fourteen years in prison. Twenty-seven women, tried in Chicago charged with the same offense in the past three or four years, had all been acquitted and the verdict in the Exlund case comes almost as a shock to many who had come to believe that the open season for husbands in that city was limited to twelve months in a year. The spell is broken, but it. may again assert, itself. Indeed, we wonder a little if Hilda Exlund did not speak the truth when, in the cell after the verdict, she piteously wrung her gnarled hands and whimpered as the tears ran down her haggard and unlovely face: “I should have been young and beautiful and well dressed, so that I might have smiled at the jurors and won their favor. A pretty woman is never convicted by men—but me! Look at me, so ugly, and old, and worn out. What chance had I?”