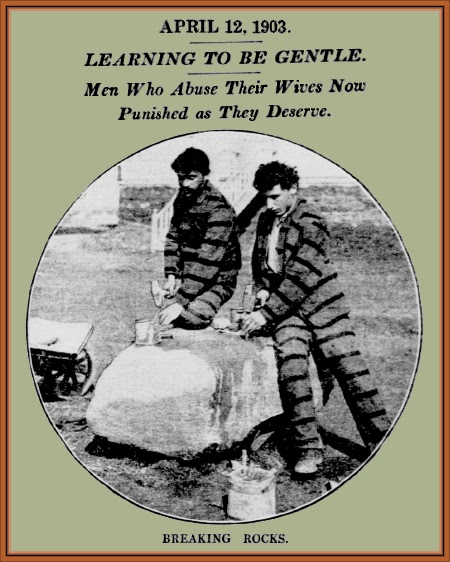 Note: Most people believe the hoax history of domestic promoted by feminists in the 1980s as exemplified in the influential 1986 Newsweek article:

The following article is an example of real history:


FULL TEXT: She came to the pier at the foot of East Twenty-sixth-st. an hour before the ferryboat for Blackwell’s Island was due to depart. In one hand she clutched the permit which she had secured the day before from the office of the Commissioner of Correction. The other hand was dragging a dirty faced, red headed youngster of six or seven years.

The was a trail little woman, with a face seamed with sorrow furrows and bearing scars here and there. She was dressed as neatly as a torn skirt and well worn waist would permit. She had no hat, a black shawl taking its place, and that of a jacket as well.

It was St, Patrick’s Day, and the boy had a band of green ribbon tied around his neck. It was particularly glaring where it ran up against his red hair, which was long at the neck.
The boat to the Island ain’t gone yet, is it?” the woman asked timidly of the ancient relic who guards the entrance to the wharf.

The trip to Blackwell’s Island does not take long after the big red ferryboat starts, but one gets down an hour early it is rather tedious. She made her way to the upper deck past the rooms for “Female Sick.” “Prisoners,” “Almshouse Cases.” for it is not “over the hills to the poorhouse” in New-York. 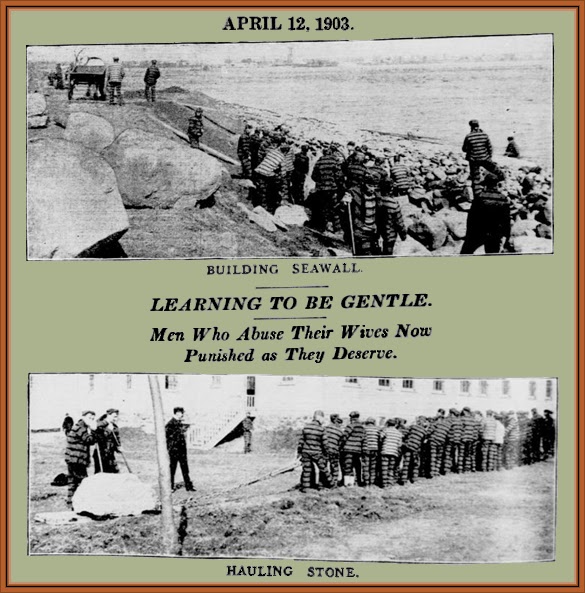 The woman and boy were first to come, but one by one the crowd of passengers gathered. There was a Bowery “tough” going over to console or consult with his “pal,” who had been “nabbed.” A flashily dressed woman from the Tenderloin was taking flowers and a basket of fruit to some of her kind who had been taken in a recent raid and sent to the Island for rest and meditation by a dignified, whiskered justice of the Jefferson Market court. Several mothers, their heads bowed in sorrow and shame, were going to visit sons who were “doing time” for “trouble” of various sorts. There were in the ranks of the visitors all sorts and conditions of men, for the mill of metropolitan justice is no respecter of persons and draws no lines of caste or race.

The boy of the red hair was restless, and was no sooner out of one kind of mischief than he invents another. The climax stuck his chubby fist into a juicy blackberry pie which a fleshy matron had placed on the seat beside her.

“You little scamp!” she howled when she caught him in this act of vandalism. “Now I won’t have no pie for my Jakey,” an’ he likes pie better ‘an nothing, an,’ he’s been ‘limboed’ now goin’ on three months.”

The tired mother apologized aid offered spank the redhead. He set up such a howl that the fat woman begged her to let him go.

“If you don’t sit still I’ll not take you off the boat when we get to tie Island,” she threatened. “Then you won’t get to see your father.”

”Will dad beat us this time?” Said the boy loudly.

Hush. Willie, hush!” exclaimed the mother, looking up to see if any one heard, and then down again on finding that several had. “You know your father never beats us.”

“Don’t he, though?” continued the youngster.

“That’s what the ‘cop’ arrested him for – knocking you down an’ blacking your eye an’ kicking you.” 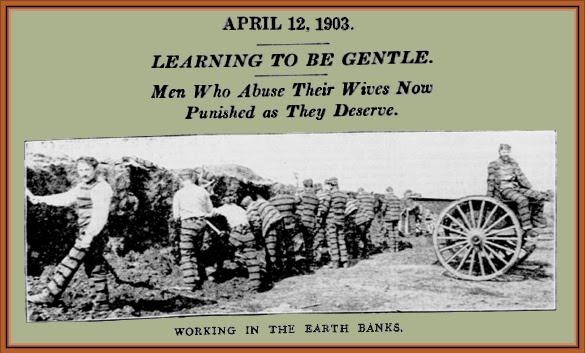 She took him to another part of the boat, where she stayed until the boat landed. She went to the Workhouse office and asked for her husband.

“What’s he in for?” asked the clerk, in a more matter of fact way.

“Well, you see, he – we, she stammered and was confused. “We had a little disagreement and he struck me.”

“Wife beater, eh?” observed the clerk. “Well, I’m sorry, but you can’t see him. We make men who beat their wives and mothers do a hard work turn when they get over here. It does them good and they don’t come back. He’ll treat you right when his time is up.”

“But I’m sorry for him,” she said. “and perhaps it is not all his fault. Can’t I see him just a little while?”

“He leaves here every morning at 7:30 o’clock, ma’am,” explained the clerk. “Goes op to Riker’s Island and hammers rock for ten hours There is nothing wrong at home, is there?” he asked.

“I’ll tell him.” the clerk promised, making a note of the name.

“And that I’m sorry for him,” she added.

“You ought to be glad he’s suffering,” declared the clerk.

The woman with the child gave to a brawny Irishwoman of the Cherry Hill type.

“What’s he in for?” was the stereotype reply.

“Wife beatin’,  It was,” she said. Rolling a glorious brogue.

“Are you his wife?” The clerk looked incredulous.

“Don’t yez be castin’ any aspersions on me character> she cried, flaring up. “Don’t yez dare to say that I ain’t his wife! An’ didn’t Father Dolan, God rest his soul to peace, marry us himself?”

‘That’s all right, my good woman. What can we tell you about your husband?”‘

“Well, he’s breaking rocks for the breakwater on Riker’s Island, up the river a bit.” said the official. “It’s the hardest work we have and wife beaters always get it.”

“And what is he doing with the money he earns? You don’t let him be sendin’ it to other woman, is it?”

Her joy was great when she learned that he got nothing for his toil, and that it was all part of his punishment for beating her.

“Just you wait.” she said, with smiles: “wait till yees get through with him. I’ll beat him into a pulp the first time he comes home. Do yees suppose he could have beaten me if I hadn’t taken a drop too much myself – jus by accident?” 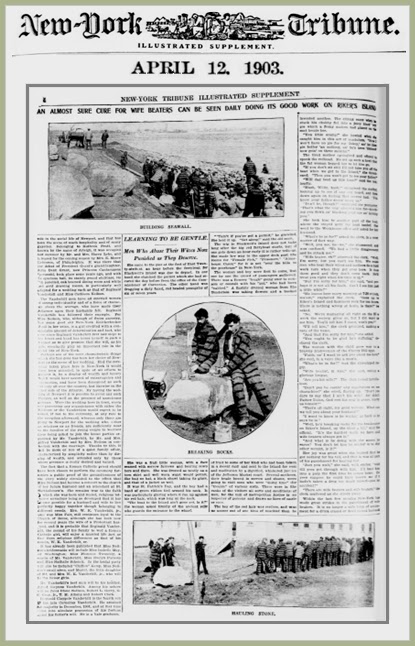 Within the last few months New-York has made great strides in the punishment of wife- beaters. It is no longer a safe form of amusement for a drink crazed or devil moved husband to come home and hammer the helpless woman who bears his name and children.

For years justices have complained that they could not punish properly the average wife-beater. because of the suffering entailed on his family while he was undergoing imprisonment. A short time ago some philanthropic citizen intrusted to Commissioner Thomas W. Hynes a fund sufficiently large to provide living expenses for many families whose breadwinners were being punished. As much as $7 a week can be given in cases of large families. The City Magistrates no longer found it necessary to let the brutal husband off with a promise of good behavior, which he promptly broke the text time he went on a drunk.

“I’ve had the pleasure of sending several old offenders to the Island for six months.” said one magistrate the other day. “My, but they were surprised when pronounced sentence!

“One fellow had the nerve to say, ‘But, judge, my family will starve to death if you lock me up tor three months.” I gave him six just to show that there was no great danger under the new order of things.”

“We see to it that wife-beaters have no easy time of it on the Island.” said Warden Frank W. Fox the other day to a Tribune reporter.

‘Every one of them who is able to work— I’ve noticed that wife-beaters and men who abuse their mothers are generally the most able-bodied prisoners we have—is shipped off to Riker’s Island, where are making extensive improvements. They unload gravel scows, empty heavy ash barrels, break rocks and do casual labor of the hardest sort. They don’t want to come back, and I don’t believe we will have many repeaters.

Judge Joseph Morschauser, of Poughkeepsie, has no fund for the support of unfortunate wives, but he has found a way around the difficulty. He imposed this sentence a few days ago on one “Gus” Merkle:

“Six months in the penitentiary on probation,” he said to the man, and then, turning to the wife can keep out of the penitentiary by giving you his wages every Saturday night, and you give him 25 cents week for tobacco. If he fails he will go to jail in short order.”

[“An Almost Sure Cure For Wife Beaters Can Be Seen Daily Doing Its Good Work On Rikers Island – Learning to Be Gentle. - Men Who Abuse Their Wives Now Punished as They Deserve.” New York Tribune Illustrated Supplement (N.Y.), Apr. 12, 1903, p. 4]