“Justice With a Punch” for Domestic Violence Offenders in Pennsylvania - 1914 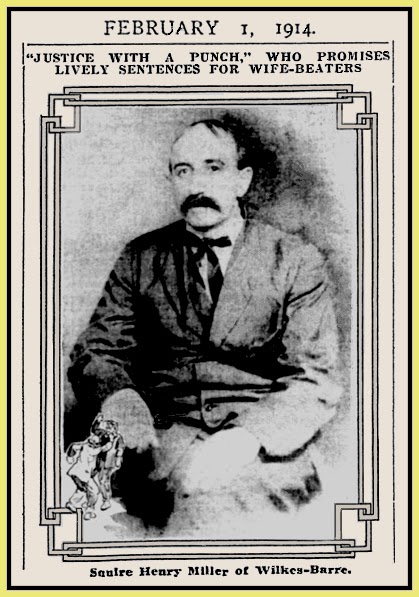 FULL TEXT: Wilkes-Barre, Pa., Jan. 31. – Believing that punishment should fit the crime, Justice of the Peace Henry E. Miller of Swoyersville, dispenser of “justice with a punch,” has announced that hereafter every man brought before him to answer a charge of wife beating on the complaint of his better half, shall receive as punishment for his crime a beating himself. And the genial and athletic “squire” intends to be the one to hand out this rather unusual punishment.

Squire Miller adds that any woman who appears at his office and lays before him a complaint that her hubby has used her as a punching bag can have her husband brought to the office of the squire without one cent of cost to her. in addition to this he gives his word that the husband will not have to pay over any of his hard earned wages in either a fine or other expense that usually accompanies a case tried before justices of the peace.

Squire Miller figures that he will get his pay in the satisfaction of beating the men who beat their wives. While the justice is rather small in stature and weighs less than 150 pounds, yet he is willing to take chances in physical combat with any wife beater who is arraigned before him.

“The only way to deal with wife beaters is to give them a dose of their own medicine. My plan is to beat them good and hard while I am at it, in order that they may know just how it feels. I want to blacken the eyes of every wife beater who comes into my court and send him forth so that people will know that he has mu trademark for men who batter their wives.”

Everyone who knows Squire Miller knows him to be a man of his word and one who always accomplishes what he sets out to do.

[“Strong Arm Of Law for Wife Beaters – Good Sound Hand-Picked Lickings to Be Dealt Out by Justice Miller. Fears Not The Huskiest,” The Gazette Times (Pittsburgh, Pa.), Feb. 1, 1914, p. 1]

No, the claim that laws created by males were for the benefit of males is false. Yes, the "Rule of Thumb" myth has been proven to be a Marxist-feminist hoax.