According to Kelleher and Kelleher Amy married five men whom she is suspected of murdering. [Murder Most Rare: The Female Serial Killer, 1998, p. 31] Other sources describe the five men as comprising two husbands and three boarders (with whom she was intimate).

She is accused of causing the death by arsenic poisoning of Franklin R. Andrews, an inmate, who died on May 30, 1914, from gastric ulcers, according to the certificate of death made by Dr. H. F. King of Windsor, attending physician and also medical examiner of the town of Windsor.

The body of Andrews was disinterred from its grave in the Cheshire cemetery one week ago, in secrecy and at night, by direction of Coroner Eli Mix of New Haven county and the autopsy was performed by Dr. Arthur J. Wolff of this city, by direction of State’s Attorney Hugh M. Alcorn and under the guidance of State Policeman Robert F. Hudley.

The body of another former inmate has also been examined and instead of death being the result of natural causes, Dr. Wolff states that it was caused by poison.

The state police have been working on this case for more, than a year and, it is their opinion that out of 48 deaths at the home in five years, probably 20 have been the result of violence.

Mrs. Gilligan waived examination and was taken to the Hartford county jail. 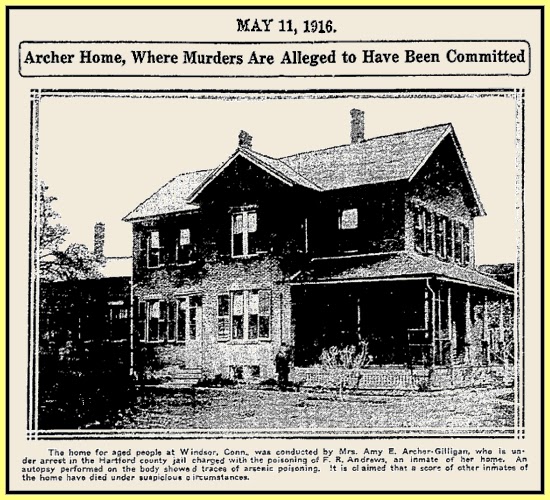 HARTFORD, Conn., May 3.—Hartford county authorities and the state police today continued their Investigation  of the death of Franklin R. Andrews, of Cheshire and other inmates of the Archer home for elderly people at Windsor. Andrews died on May 30, 1914, and last night Mrs. Amy E. Archer-Gilligan was arrested charged with his murder by poison, Andrews’ body was exhumed a week ago by Coroner Ell Mix of New Haven county, at Cheshire and. brought here for an autopsy. This, it is charged, showed that poison had been administered. Mrs. Gilligan denies any connection with the death of Andrews.

According to the authorities secret autopsies performed upon the bodies of two other former inmates of the home have indicated that other deaths there of the forty-eight which have occurred in the past five years may not have been due to natural causes in the cases of the other two bodies on which autopsies were performed it is alleged indications of poison were also found.

Mrs. Gilligan is held without bonds and the case may be presented to the grand jury next month for indictment for the death of Andrews.

“After our general investigation of affairs at the Archer, home that included following many cases,” said State’s Attorney Hugh W. Alcorn, “we became certain that something was wrong.”

“Then we exhumed the bodies and were convinced that it was a case of cool, calculated premeditated murder of inmates of the home.”

Patients were received at the home under two plans, one providing for the payment of $1000 for life care, and the other, payment of a stipulated sum weekly. Andrews had paid for life care.

“Mrs. Gilligan is 41 years old and before going to Windsor in 1907, conducted a home for the aged at Newington.

The state police have declined to make public the results of a search it is understood that they carried away with them several bottles bearing various labels and a number of papers including contracts with present and past occupants of the home. 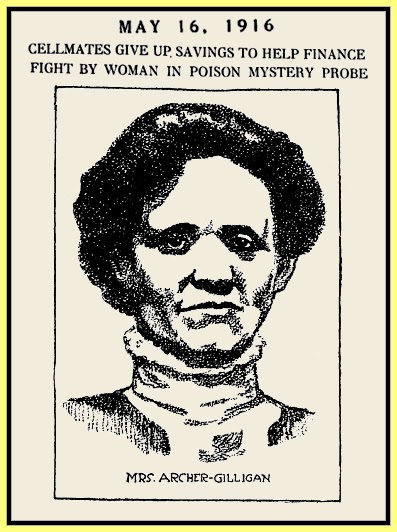 FULL TEXT (Article 2 of 4): Hartford, Conn., Nov. 30. – Did Mrs. Archer-Gilligan make a business of wholesale murder for pecuniary gain, or is she the innocent victim of persecution on the part of neighbors who did not like her personally, and for this reason caused suspicion to be directed against her? This is the question that is expected to be answered at the woman’s trial, which will be one of the first important cases to come up at the December term of the superior court.

All of the alleged victims were inmates of a home for elderly people which Mrs. Gilligan conducted in the town of Windsor, six miles from Hartford. According to the police information, Mrs. Gilligan, who is 41, first conducted a home for aged people at Newington, Conn., in 1901. In 1907 she moved the establishment to Windsor. Patients were admitted to the institution under two classes. One class made a cash payment of $1,000, which insured care for life. The other class made weekly payments. It is said that all the alleged victims belonged to the class entitled to life care.

According to the present plans of State’s Attorney Alcorn the accused woman is to be tried first under an indictment charging her with the murder of Franklin R. Andrews. Andrews, an autopsy established, died of arsenic poisoning, the authorities allege. It was taken in such a quantity as to act as a preservative on the body, which, though interred in May, 14, was in almost perfect condition when exhumed for examination two years later.

Although the indictments against Mrs. Gilligan charge her with responsibility for only five deaths, it is declared that more than twenty of the inmates of her home have died under more or less suspicious circumstances during the past five years. The poison sale record at a drug store in Windsor shows many purchases of poison by the defendant, it is alleged. In May, 1914, two ounces of arsenic, and in June, 1914, one pound of arsenic was purchased “to kill rats and mice and bedbugs.”

While Mrs. Gilligan was tried on one count only, the indictments returned against her by the grand jury charged that she had poisoned to death four other inmates of the Archer home had died under peculiar circumstances during a period of several years. Her motive, the state set up, was to profit on life contracts she had made with inmates, whereby she agreed to provide a comfortable home for them during the remainder of their lives for a specified sum, generally $1,000.

Mrs. Gilligan sobbed as she heard the jury’s verdict. Her daughter, Mary Archer, who has been constantly beside her mother throughout the trial burst into tears and clasped her mother’s hands. They gained their composure quickly and followed the proceedings calmly.

The trial began June 19th, and lasted about four weeks. Mrs. Gilligan, who is about 45 years old, was arrested in May, 1916.

Franklin R. Andrews died on May 30th, 1914. Sensational disclosures immediately developed. Among others who, the State claimed, were poisoned to death, was her husband, Michael Gilligan. His death occurred before that of Andrews.

A hospital spokesman said Mrs. Archer-Gilligan, who is 87 years old, was placed on the danger list a few days ago. She was committed to the hospital in 1924 after she was declared insane. Mrs. Archer-Gilligan was sentenced to hang in 1917 for one death in her convalescent home.

The conviction was overturned by the State Supreme Court of Errors.

At her second trial in 1919, she first entered a plea of insanity, but later pleaded guilty to second degree murder. She was sentenced to life imprisonment. 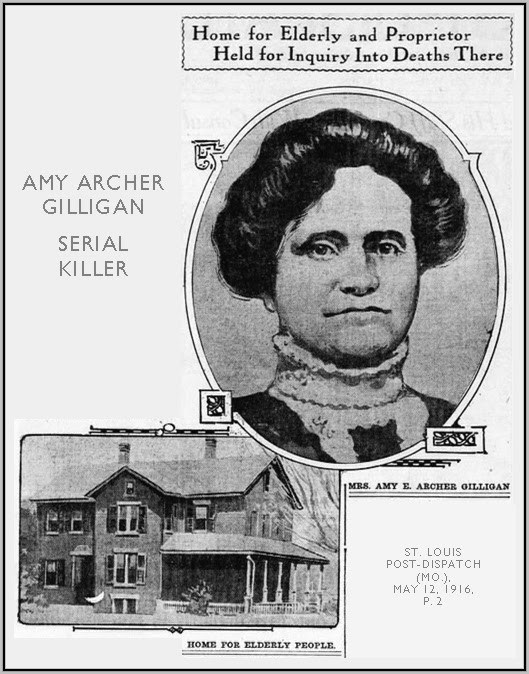 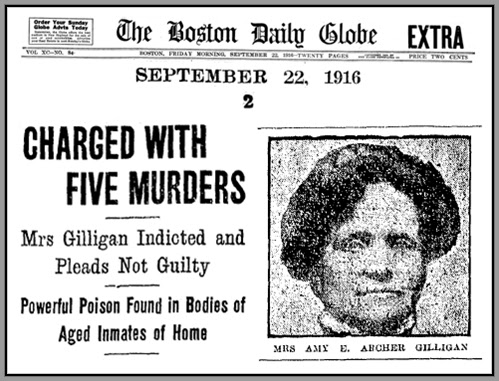 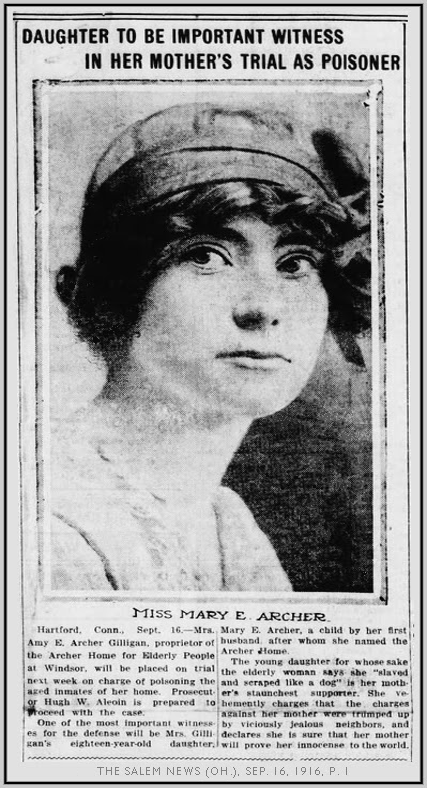 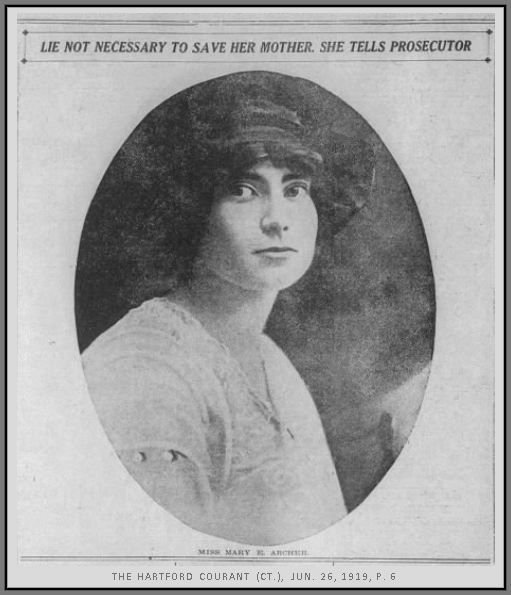 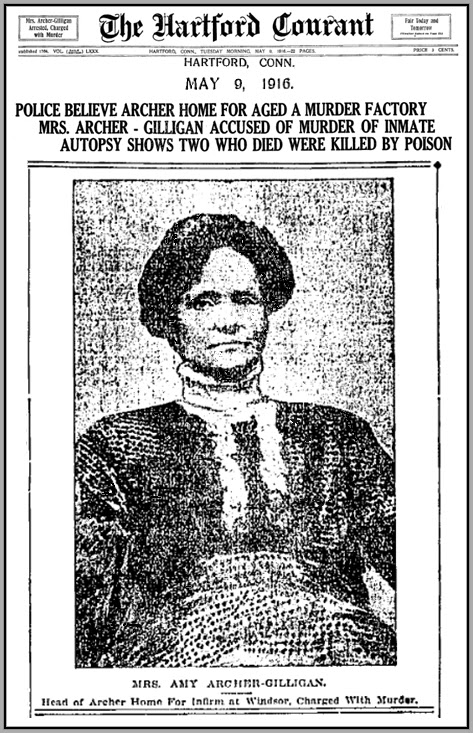 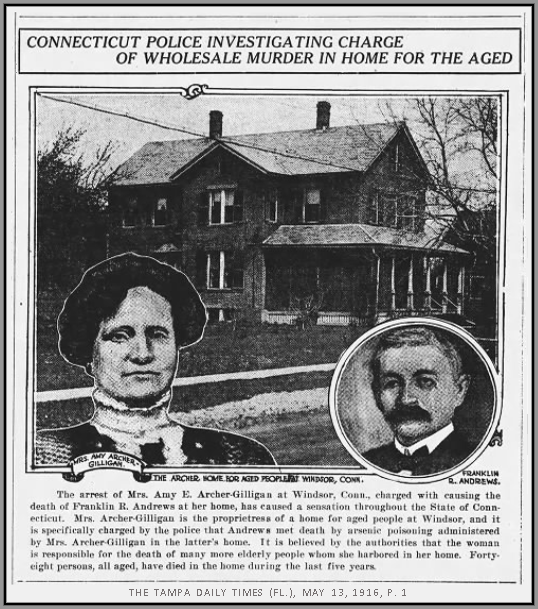 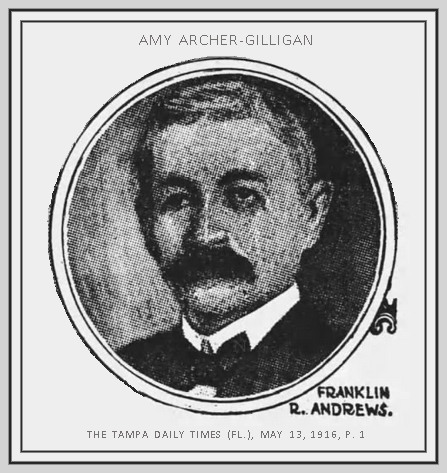 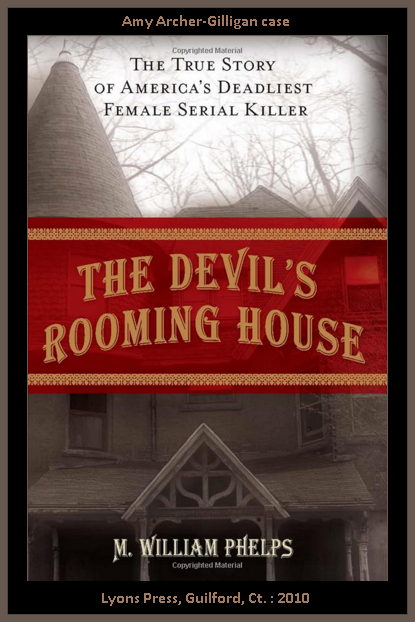