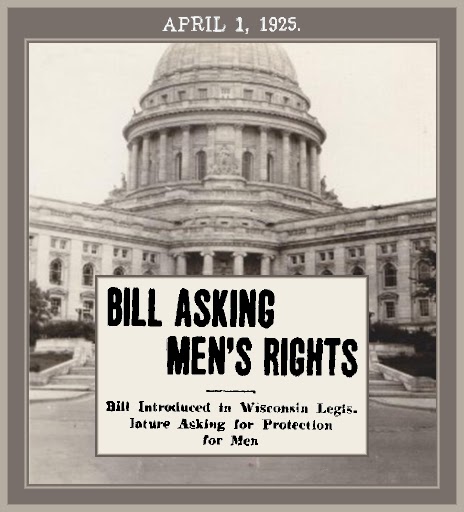 FULL TEXT (Article 1 of 2): Madison, Wis., Apr. 1. — Equal rights for men is sought in a bill landing in the Wisconsin legislature which seeks to save males from the lure of blackmailing women.

“It is time men be accorded equal rights with women before the law,” advocates of the bill said. “Women of today are no longer without protection. They can vote, wear trousers, do anything a man can do. And they have one immense advantage over men. The unsubstantiated evidence of a woman in court can put a man behind the bars.”

The handicap is too great. Senator J. L. Barber, a physician, believes. Shrewd women can outwit the law by defects in the criminal code, Barber holds. Women are doing it every day. It is time this form of blackmail is stopped.

Barber came out in support of the bill, following its endorsement by the Wisconsin Judges association. “I can cite instances where women practicing their wiles on unsuspecting young men have lured them into the trap and then swindled them on the threat of court action. There is only one alternative in such a predicament. The man always pays. He hasn’t got a chance in court; where a woman’s word counts for everything. I personally know of young men now serving prison terms who were ‘framed’ on a woman’s perjured testimony.”

“These cases are all too common should say thousands of instances of out and out blackmail, engineered by a woman’s cunning, occur yearly throughout the country. The world hears nothing about them. We want to put a stop to the practice in Wisconsin.”

FULL TEXT (Article 2 of 2): Madison, Wis.—The senate has voted to scrap the equal rights bill designed to safeguard the manhood of Wisconsin from sex blackmail on the unsupported testimony of girls under 18 years of age. A violent wrangle between Senators Barber, Marathon, and Ben Gettleman, Milwaukee, proceeded the 17-10 roll call by which the bill was indefinitely postponed.

Senator A. K. Carey, Edgerton, who voted for the bill, changed his vote at the last moment. He announced he will move [for] reconsideration.

Gettelman opened the debate with an impassioned attack on the measure, which he asserted would leave the young girls of the state without adequate protection against sex crimes.

“This bill would put a stop to a species of blackmail from which male victims have no recourse,” Senator Quick stated. “Sex charges made by a girl of 16 or 17 against man, young or old, are easy to make, but hard to disprove. When a jury has to take the man’s word against that of a girl. 99 times out of 100 the man is convicted, innocent or guilty.”

“Whenever legislation is proposed to bring human relations up to a more equitable standard, always you have this poisonous sentimental appeal, which has been used against this measure.”

Senator Barber, whose veiled thrusts at Gettleman provoked the Milwaukee wet leader* to a frenzy, eulogized the bill as correcting a situation he described as “a crime against civilization.”

* [“wet leader” refers to a politician opposed to alcohol prohibition.]