FULL TEXT: The most colossal murder trial in the annals of history will begin at Archangel [Arkhangelsk, or Archangelsk] next month, when a woman “philanthropist,” Mme. Kusnezowa, will be placed in the dock charged with murdering 1012 children by poison.

The “ogress,” as such she is termed here, kept a “baby farm” outside the town, where illegitimate children were adopted for £5 and upward. Special prices were made for aristocratic mothers.

The fact that ever since the place was opened five years ago the death-rate among the infants had been tragically high (320 died, in the year, 1909) did not attract attention, as child mortality in this icy northern region is normally high. Eventually, however, the police began to make inquiries. After exhuming a score of bodies in the cemetery adjoining the home they arrested the woman.

A remarkable feature of this wholesale massacre of innocents is that proper death certificates were given in each instance. Several of the children of course had died of natural causes, but the vast majority were found to have been poisoned. At one period there were 450 children in the home.

Search is being made for the doctor, while several of Mme. Kusnezowa’s staff are under suspicion. The trial in which the greatest interest is being taken, is expected to last several months, as each case will be taken more or less separately and the evidence of over 800 mothers will be heard.


FULL TEXT (translated from German): The "Berliner Tageblatt" reports from Petersburg: In a suburb of Arkhangelsk a "children's home" was excavated, in which over 35 years more than a thousand children were killed. The angel-maker Kusnegow was arrested, as well as the city doctor Kutusoff, who had issued her death certificates without mentioning the child corpses. There is a sensational process going on where many people are likely to be compromised. 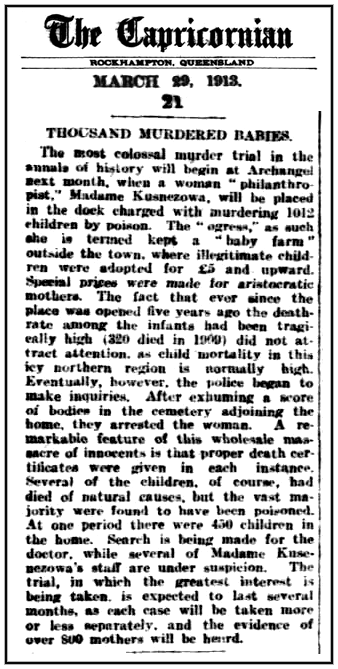 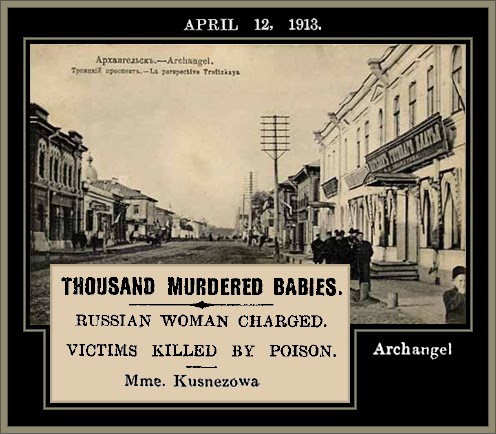