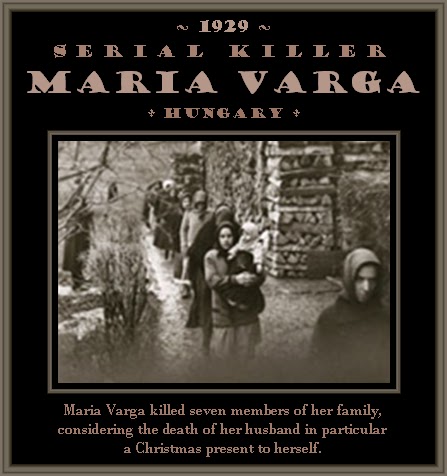 Some German texts use the Spelling "Vargha."

FULL TEXT (Article 1 of 3): Budapest, Thursday. - What is regarded as probably the worst Hungarian poisoning drama was unfolded at Szolnok When Maria Varga was charged to-day with poisoning her husband, also her lover, Michael Ambros. The story goes that the husband was Hungary’s first soldier to be blinded in the war, being the victim when a shell burst on Russian frontier. His wife was disgusted at being so burdened, and gave him the coolest reception. She called in a “widow-maker,” Aunti Susi. Her husband died in agony after the second dose of arsenic.

A story was circulated in the village as to how the ghost of the blinded soldier was seen tapping a stick round the churchyard, and tearing the sightless sockets of his eyes, as he went towards the farm. The widow declared that the house was haunted, and took in Ambros, who died in similar agony.

Maria’s defence was that she believed the “widow-maker’s” medicines were harmless.

FULL TEXT (Article 2 of 3): Budapest, February 10. – The appalling spectacle of a woman, recently condemned to death, giving evidence against her former friend, in order that she should not go to the gallows alone, was a feature of the Szolnok case, when the trial of 31 women and three men prisoners was resumed.

The evidence was given against Maria Varga, aged 41, who was accused of having murdered her husband, Stefan, who was blinded in the war, her lover, Michael Ambrus, and her lover’s grandfather. The woman was led in wearing a velvet mantle and other finery.

For a time, the evidence was so weak, that an acquittal seemed certain. Her mother gave evidence that Stefan often spoke of suicide, as a release from blindness. Moreover, it was shown that Maria Varga did not, in fact, inherit the property when Ambrus’s grandfather died, and although Varga admitted she administered the fatal dose, she said she did not know it was poisonous. She explained that her husband was acquainted with Fazekas, a midwife, who committed suicide when the police came to arrest her. Maria added she understood it was a soothing draught Fazekas had given her husband.

However, the last witness for the prosecution, Frau Kardos, entirely changed the aspect of the case.

This once beautiful woman, who was condemned to death a few days ago for having murdered her husband and only son, came to the Court in the custody of gendarmes. She was also in a her finery, After taking the oath, she turned upon the cringing figure in the dock, and cried, “You know your statements about Suzanne Fazekas. All we villagers know that if Aunt Suzanne entered the house, it signified unavoidable death. Everybody knew Suzanne’s profession. She led astray all the women in the village. Whenever she darkened the door of a village home, some unwanted man or woman soon died.” I heard  you promise the midwife 500 weights of wheat if she killed your husband.”

Frau Kardos concluded by describing Stefan’s death agony in detail, and while the crowded Court shuddered with horror, she added. “I killed my own husband and son, so I know how they die. I am condemned, and I do not want the other murderess to escape.

Varga angrily denied the charges, but Kardos’s damning evidence was sufficient, for Varga was found guilty of having murdered her husband.

Kardos, however, missed her final vengeance, as Varga was sentenced to imprisonment for life. Despite the public prosecutor’s demanding the death sentence, the Court decided it had not been proved she murdered Ambrus, although the woman admitted the could not explain how such an enormous quantity of arsenic got into her lover’s body. There was also lack of evidence of how the grandfather died.

The body of another peasant Peter Hegedues, was exhumed to-day. He died in 1914, and It is believed he was poisoned with cucumber salad containing rat poison.


FULL TEXT (translated from German) (Article 3 of 3): Szolnok, February 7. - Today before the local district courts there is a hearing against 41-year-old Maria Varga, who is accused of double murder. The accusation accuses her of poisoning her 24-year-old war-blind husband Stefan Joljart in April 1916 and five years later of poisoning her partner Michael Ambrus.

~ She declares herself not guilty. ~

Defendant: I am innocent. I didn't kill poor Joljart or Ambrus. - Court: How did your husband die? - Defendant: We got married in 1913. Our marriage was very happy. Then the terrible misfortune happened to him. In 1915 they brought him home from the war to Nagyrev. He was blind in both eyes and cried all day.

Court: You claim that he was sick there? - Defendant: Yes, when he came home he was sick for two weeks, then he died.

Court: It wasn't that easy. Tell us more about how your husband died.

Defendant: He always complained of stomach cramps. The midwife Fazekas - in the village – we called her Susi Olah - often came to our house. My husband complained to her that he was in pain and she said: “Don't worry, I'll bring you something that will heal you. Then she brought a small bottle and from it she put a lot of drops in his drinking water.

My husband drank it and then vomited. Otherwise he felt good.

Court: So your husband didn't die on the first dose?

Defendant: Then he just got a little more sick and we called the doctor. The doctor gave him medicine and after three days my husband died. A year later came Susi Olah to me. She wanted me to marry her son. When I refused, she shouted angrily: “You will pay me for this!”

Court: And what about your life, Michael Ambrus? – Defendant: I don't know anything at all. He died an ordinary death.

The accused must then admit that her daughter inherited from this 20 yoke [land measure] after the death of Ambrus, an unusually large possession for Nagyrev. She goes on to say that her husband was intolerable, but it never occurred to her to harm the husband.

Court: You all knew very well in Nagyrev that you always die from the medicine of Mrs. Fazekas.

Defendant: I was always very good with her. I've never heard of anything like that.

The first witnesses do not testify very favorably for the accused.

Sensation arouses the statement of the doctor Dr. Szegedi. According to the accused, who treated her first husband Szegedi describes this as untruth, which he was in the field at the time and only ever imagined in Theißwinkel since 1920.

The accused turns deathly pale and wrings her hands in despair.

Court: What do you say now?

Witness: I don't understand that! I remember that it was Doctor Szegedi.

~ The poisoner sentenced to death as a witness. ~

The statement of Maria Szendi-Kardos, who was recently sentenced to death for poisoning, caused a sensation.

Court: What do you know about Joljart's death? - Witness: I don't know much about him except that he did not get along well with Maria. For this I can tell you all the more about the Ambrus. With this, the thing seemed suspicious to me. You can believe me. Mr. Chairman: I already understand something about it. I killed my son and my first husband myself.

Court: So what did you notice? - Witness: The man sued me. Maria, something eats in my gut. I already knew what was going on. I knew what it means when “Aunt Susi” visits someone. Mr. Chairman, if I have to atone for my sins, others should do the same. Just two weeks ago, I sat here on the dock with Juliane Földvari. I admitted everything honestly and was sentenced to death, and she who lied was acquitted.

Witness: One day I ran into “Aunt Susi” at the front door of Mrs. Varga. She told me that the Varga doesn't want to pay. As soon as she was gone, the Varga rushed up to me and asked what we said. I told her what she said: “I've already given her enough, I can't give everything away”.

Court: Did she say you what the midwife asked for the money for?

Witness: That wasn't even necessary. It was so natural that she asked for money for the fly-water, as it goes without saying that the geese are put out to pasture every morning.

The next witness, the 67-year-old Ms. Lajos Cser, who was suspected of being poisoned twice and who has now been questioned, caused even greater sensation.

Court: What do you know about the whole thing?

Witness: My husband has an inn in Nagyrev. Once Varga was drinking with us and Marie came to get him killed. He said: “I'm going with you, but woe to you, I had to give five meters of wheat to Aunt Susi because of Ambrus.” Then she shouted at him: “Shut up, you idiot, the devil will fetch you with your talk.”

Court: Did you know that Mrs. Fazekas was given the five meters of wheat for killing Ambrus?

Witness: Yes, Varga herself had told me that the midwife had been paid to get the Ambrus out of the world.

Maria Varga was found guilty of the poisonous murder of her greatest gods and sentenced to a life-long penitentiary.

The condemned: I am happy, I feel completely innocent!

FULL TEXT (Translated from German): Budapest, January 23rd. On the 7th - The fourth poisoning trial begins in Szolnok in February against the 41-year-old woman Marie Vargha, who is accused of having poisoned her husband and later her lover with arsenic. Her husband came back from the world war blind and with a serious stomach disease. He learned that his wife, then 27 years old, had a lover. After an excited scene of jealousy, the woman decided to get the man out of the way. Later she also got tired of her lover and poisoned him with arsenic. In front of the examining magistrate, Vargha denied both murders and declared that she had only asked the village witch, Frau Fazekas, for medicines for the two seriously ill men, and nodded that she knew that the witch had sold her arsenic poison. 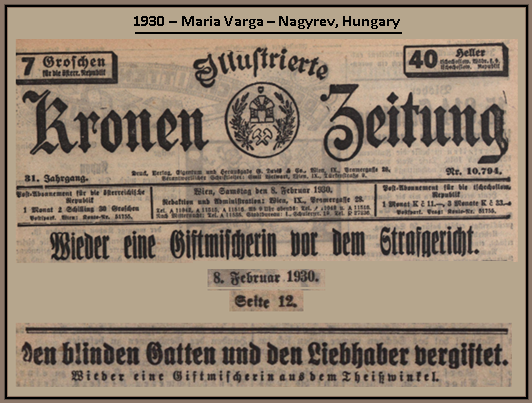 ***
Note: There is a possible confusion with another case, Sijj, in the following account: “Maria Varga killed seven members of her family, considering the death of her husband in particular a Christmas present to herself.” [Katherine Ramsland “Angels Of Death: The Female Nurses - Murder By Proxy,” True TV website] 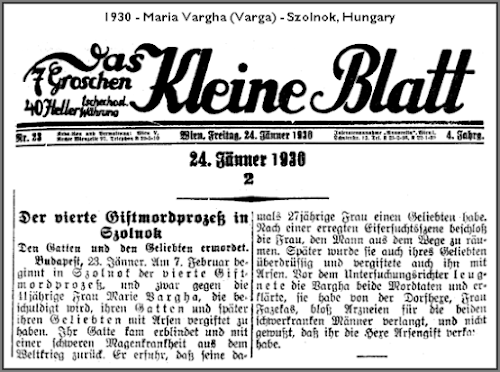